Wake Up. Be Serious. 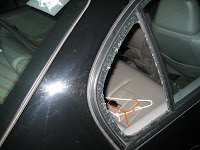 The following blog is completely true. Everything written happened this morning at approximately 4:30am. The names haven't been changed.

I couldn't get to sleep last night, but finally about 1am I passed out. That's normal. A 4:30am wake-up call from Morgan is not normal.

LC: Morgan, what are you doing?
Morgan: I need you to wake up and be serious.
LC: Why what happened?
Morgan: The Dallas police just called me and said that your car was stolen. A 16-year-old Hispanic is driving it.
LC: Shut up. What are you talking about?
Morgan: Just go look outside and see if it's true.
LC: Ok, I'm going to look. (Look out the window.) S#!t! Morgan, it's gone! My car got stolen! What the heck? Why did they call you?
Morgan: I don't know really. Call the cops, here's the number...

Mike: This is Royal.
LC: This is Lauren Cowling. My car was stolen.
Mike: Do you know why a 16-year-old Mexican was driving your car?
(It takes everything in me not to make a sarcastic comment about how much I hang out with 16-year-old boys)
LC: No. I guess he stole it.
Mike: Well, he has the keys.
(I'm an idiot)
Mike: Do you keep an extra set of keys in the car?
LC: No. Oh, wait. Last week my friend took my car to the airport (shout out to BRITT), I never took the keys out.
Mike: So, you didn't give him the keys?
(Again, had to hold the comment.)
LC: No, sure didn't.
Mike: Ok, well get someone to bring you down here and get your car.

So, Tami wakes up (and is extremely confused) and I call Reggie and I was yelling, so Noelle wakes up and she's all, "What's going on?" I tell her my car got stolen and it's the most excited I've ever seen her and she says, "Can I go?!" The three of us load up into Tami's un-stolen, un-broken into car and head for the scene. When we arrive, I get out and introduce myself and am immediately embarrassed at the state of my car. I have crap in there from like, 1997. Clothes, toys, papers from college, papers from work, pictures, mail...I mean, tons of crap. I apologize for the messiness and Mike says, "Come here and tell us if something is yours or not." In my head I am thinking, "I'm about to get arrested! Someone stole my car and I'm going to jail! I probably have something in my car and don't even know! I'm getting arrested!" Mike shows me a bag of cheese heroine (it's all the rage here in Dallas). I said, "I don't even know what that is!" Mike told me what it was and then told me the whole story about he saw the kid smoking and he noticed the tennis racket in my car and figured it wasn't his racket. The kid told him he bought the car, "two hours ago from a dude." Shady story, kid. Anyway. I have to search the car and it smells like pee cause little kid smoked up in it and then Mike says I can leave.

I really wanted to talk to the kid and tell him I forgive him and that I'm not mad, but confused. I mean, WTF, dawg? Who would want that car. I mean, exact words from Reggie when I called him and said my car was stolen, "Well, who would want that car?" Exactly. Also, I thought it would be a perfect time to tell him about Jesus and his un-conditional love for car-thieves. Unfortunately, I was not allowed to draw the bridge diagram for the kid or tell him about Jesus. I'm going to pray for him though. And I'm serious. I mean, he's doing drugs and stealing cars. Not exactly the high road. That's the great thing though, you can always change. Man, I wish I could've talked to him. He was probably high on cheese heroine though (it's all the rage in Dallas).

What have I learned from this? After you let someone drive your car to the airport take the keys out of the console, actually check to see if you have a car alarm (don't just assume), keep your phone on at all times, it helps to have a messy car (that's how they found Morgan's number to get a hold of me) and I do have some faith in the fine men (and women) of the Dallas Police Department.
Posted by LC (and sometimes LB) at 6/06/2007

I mean, that's the funniest thing i've ever read.

Love re-reading this...oh the memories!! One part you left out was me freaking out that this was a big scheme to kidnap us all so I called 911 to verify that Officer Mike Royal was real and that he did in fact have a stolen car. Just a lesson for the kiddos, you can't always trust when someone claiming to be a cop randomly calls your friend and says you need to come meet them on a dark street in the middle of the night. This time, fortunately, it all worked out.