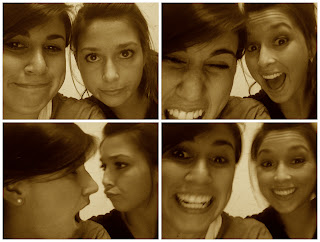 I am really thankful for a lot of things. In no particular order...

1. My family. I have a really great, fun family who enjoy my company immensely. They especially like when I tell stories from childhood, I'm thankful that they listen.

2. My roommate. Lil' Morgie is a jewel. A rare and precious jewel. She is fun, too.

3. Laura Brittain, I'm thankful that I have a friend I can share a blog with. She is the bestest best friend ever.

As we are approaching my favorite holiday, I've noted a few things to give thanks for (in no particular order):

1. TV shows on DVD.
2. Friends to watch them with (for hours on end).
4. Inside jokes. Would love to be a part of one someday.
5. Larger-than-life-size posters of John Krasinksi at the Gap.
6. Happy hours.
7. Birthday parties.
8. Hand written notes.
9. Laura Cooperisms.
10. Belly laughs.

What did Teddy Roosevelt do for you?

Lately, I've become very intrigued with the life of one, Theodore Roosevelt. To us, he's Teddy, to his close friends he was simply T.R. or Theodore. Very interesting that all of the world called this man by a nickname, but those closest to him called him by his formal name.

Why the crap is Teddy Roosevelt on Mount Rushmore with the likes of some the greatest Americans to ever live? Does Ted really live up to the likes of GDub, Teej and Abes? Does he? Good question. I don't really think so. But, then again I think Franklin Pierce is fascinating.

Ted was one of the very first environmentalists, today his equal would be someone like Al Gore. Strike one against being on Rushmore. But, actually not. He set aside almost 190 million acres for natural forests, wildlife refuges and the like. Good ideas, but was that act up with freeing the slaves? Oh, he also created a national bird preserve. What the heck even is that?

T.R. was the first American to win the Nobel Prize. I say it would've happened sooner or later. Still not up to par with Teej.

I will say his foreign policy was impressive. It was under his watch that we became a global power. Way to go, T.R. But, you're no GDub.
Posted by LC (and sometimes LB) at 11/13/2007 No comments: