Dear Rihanna,
As a partial fan of your music, I have a few things to share with you that are causing me concern. I'd like to state that I'm concerned, because you, like all men (and women) were created in the image of God by God and I don't think you understand that.
I can understand that you went through a very painful and traumatic event in the public eye and that you don't want to be seen as a victim, so you decided to come back and prove that Chris Brown was not going to keep you down, but...I feel like coming off as a whore and parading around on television in clothes that had to have been made for a prostitute is not the way to do it.
And your music? I'll be the first to admit that "Umbrella" was life-changing for me. Oh, that song! That song! Still speaks to my heart. But, your more recent singles, particularly, "Rude Boy," "What's My Name," and "S&M" are incredibly disturbing. The lyrics are too much to post on this web log and the videos are even worse.
gUrl, what happened to you? I know you've been hurt, but God loves you. A lot. To him, you are beautiful and pure. You don't have to be like this, this is a decision you made on your own. I just don't understand...surely, you have some self-respect? Right...?
I mean, seriously-- you can do better. I believe in you. Really.
I'd be happy to show you the bridge diagram sometime and tell you a story of heart-changing redemption through the work of Jesus Christ. It's a good one! Just think about it.
Anyway, lovies.
-lc
Posted by lc at 2/24/2011 4 comments:

If you know me or have ever had the extreme pleasure of conversing with me in person, you know the basics about me: I love the Lord Jesus, I love a cold drink and a good cuss word and of course, I freakin' love the Presidents of the United States of America. You probably know that Franklin Pierce, our nation's 14th President is far and away my favorite, but really, I love them all with the same passion.
Because of this deep love for these men and this great country, I want everyone to enjoy this day. I want everyone to throw their hands in the air and wave them like they DO care. Tell someone, "Happy President's day," and mean it. Share a fun fact, share a not-so-fun fact-- take pride in the fact that we live in a country where we elect our leaders and then throw them out when they suck. Rally around the cry that a self-educated man born in a log cabin who suffered from extreme depression could become POTUS or that a dude who was once a prominent actor could rise to be the most powerful man in the world.
To get you started, here are some ideas on how to enjoy this day like a POTUS would...
You could skinny dip in a lake or river like John Quincy Adams...you could go on a shopping spree at Brooks Brothers like William Howard Taft...you could go to the dentist and get some wooden teeth like George Washington...you could rent a house at the Jersey Shore like Presidents Grant, Arthur, Hayes, Harrison, McKinley, Wilson and Garfield (who died at the Shore, actually)...you could drink in excess like Franklin Pierce and then quote scripture, you could play the saxophone for your cat like Clinton...the list goes on and on...
Don't let this day pass you by.
And if you feel like it might, just ask yourself, "What would POTUS do?" and PARTY!
**You can also enjoy this dance video I made of all the Presidents in wearing Polo.
Posted by lc at 2/21/2011 1 comment:

Because I have a plethora of male suitors hoping to serve as my 2011 version of a valentine, here are some ideas for those also hoping to woo me, on this day, Valentine's Day 2011.
WHAT? HIDDEN KITTY LITTER BOX
WHY? Because I'm tired of snuggling up with a potential joint-checking account holder and being able to visibly see the kitty litter box. With this gem of an item, we won't have to look at it any more! 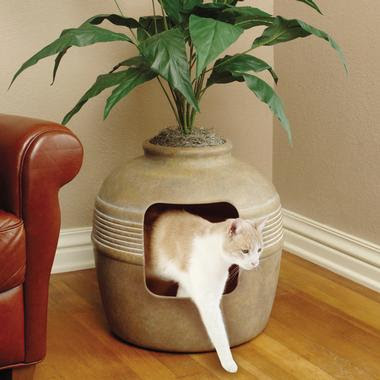 WHAT? YUKATA COVER-UP ASIAN
WHY? Well, if it's not obvious, then I don't know what it is! It's sexy, fun AND multi-cultural. What better way for me to show how diverse I am than with an Asian-themed cover-up?! 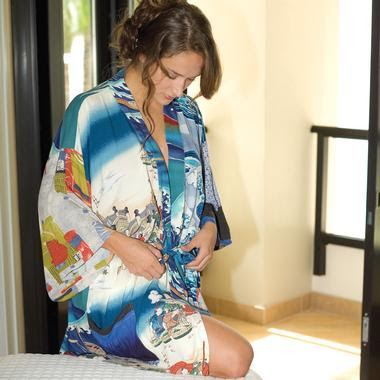 WHAT? DUMMY SURVEILLANCE CAMERA
WHY? I'm not quite married yet, so every now and then I get scared at night. What better way for my honey to show he cares than purchasing a fake surveillance camera to scare would-be danger away from me while I'm getting all my beauty sleep? 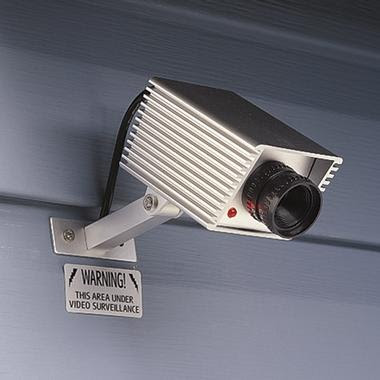 WHAT? JOINT-CHECKING ACCOUNT
WHY? When someone loves you they want you to be able to go to Target whenever you want and buy as much toilet paper as your under-the-sink cabinet can hold. You can't put a price on love, unless you're sharing your money with your love. 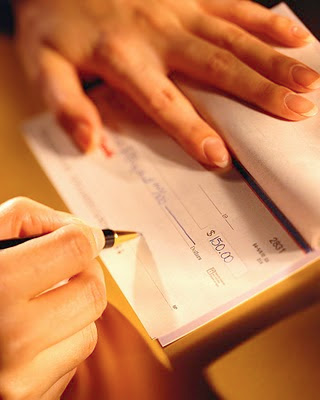 WHAT? PUPPY
WHY? The best way to show someone you love them is to buy them a (cute) puppy, let them name it and then take that puppy home and take care of it yourself and never seek any responsibility from the other party, unless you're leaving town or something for more than 36 hours. Love is letting someone have a puppy without the restraints of actually having a puppy. 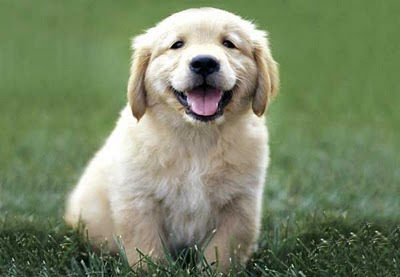 Alright, in this state of snowmergency I've been getting tons of e-mails and tweets asking me for recipes and ideas on how to keep warm with some yummy food! I can't keep this yumminess to myself any longer. Here's a step-by-step photorial on an easy, breezy DIY pizza for one! ENJOY! 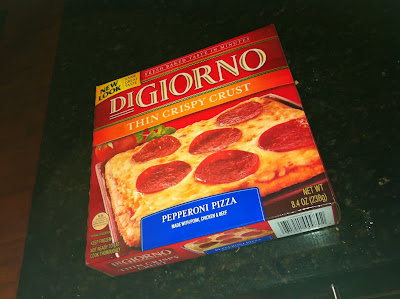 Step 1. Buy a pizza from your local grocer. You can choose the brand! 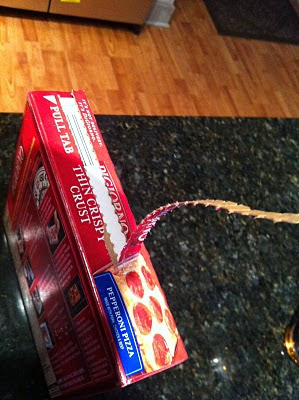 2. In all likelihood the brand you choose will have a pull-tab. PULL IT! 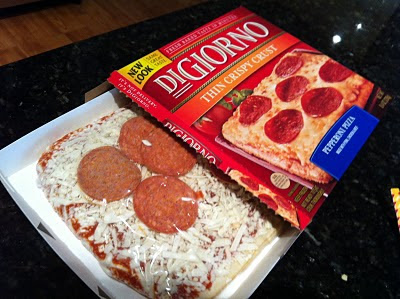 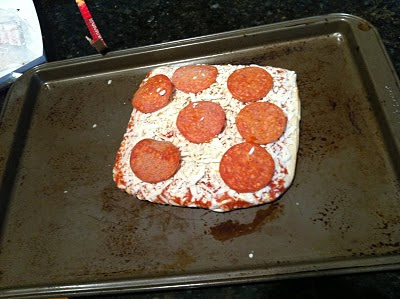 4. Place pizza (remember: you can choose whatever brand YOU want!) on cookie sheet. 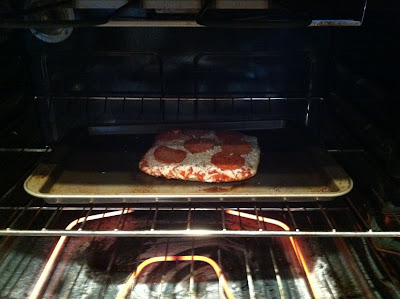 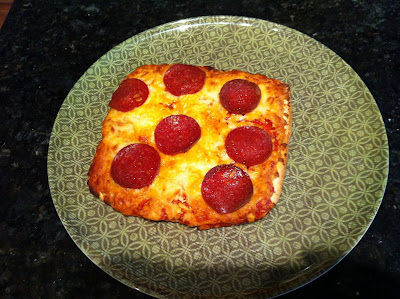 6. Remove from oven. Place on a plate. 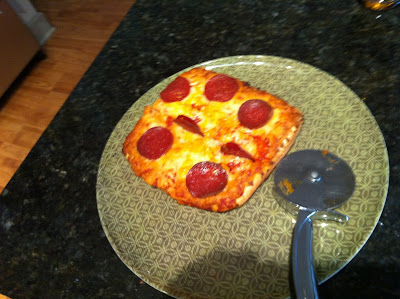 7. Slice the pizza. You can use a knife or a fancy-dancy pizza cutter! 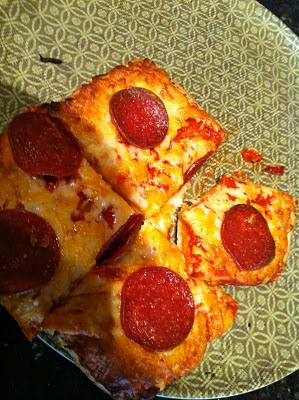