this is a story about a girl named lucky.

It's Britney, bitch (let me apologize to my four readers out there-- this post may contain words that don't go along with the fact that Jesus lives in my heart. What Can I say? I love cuss words. And Jesus. I love cuss words and Jesus).
I think the only other time in my life I've ever felt so conflicted about doing something was walking out of my high school for the last time ever. There was so much sadness, so much joy, so much confusion, little bit scared, a lot of uncertainty and a ton of excitement. I mean, it's Britney, bitch! How could you not be a little emotionally confused?
Admittedly, I paid money to see Britney Jean Spears put on a "concert." But, I just looked up the word "concert," and just about every definition of the word said something about instruments being involved and every one of them did say that there should be singing. There were no instruments (save this one guy that came out and played a guitar solo-- totally rando) and there was no singing.
But, you don't go to a shit show to listen to someone sing, do you? I didn't think so. Me either. I knew what I was signing up for, when I told my friendlies, Becky D. and Rach (SHOUT OUT) that we would be attending "The Circus: Starring Britney Spears."
The excitement had building for months leading up to this circus (Or maybe it was anxiety. At this point, it's over, and it's hard to tell). I just had no idea what she was going to do-- or say, even! It was like getting ready to see an old friend from junior high, that you know has had a rough-go of things lately. And that's exactly what I felt like when she took the stage. There were many moments of, "Oh, poor girl...WAIT...she's a mother!...get it, gUrl...that was awesome...oh, gosh--don't do that! stop!...does she even have a microphone?...at least she has clothes on...well, it's over."
There was a lot of sadness in seeing her because they kept showing clips of her old videos, you know the ones from back in the late 90s, early 2000s, where her biggest flaw was her accent and that awful matching denim number she and J. Timberlake wore once. She's just not that girl anymore.

All in all, it ended well. As in, no one got hurt, no one was naked and Perez Hilton was her video opener. I didn't walk away completely scarred and I didn't see very many young children there, which I'm incredibly thankful for.
And, I won't lie-- gUrl can dance. 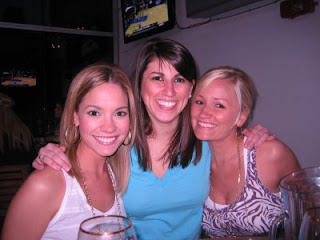 The only two people in the world I can imagine watching B. Spears with, Becky D. and Rachael, the accountant.

I love Jesus but I cuss a little...another thing Gladys Hardy probably said..