Part A: The Hills

I think this week was the first week I honestly did not need to throw up after watching. Some of the characters grew a backbone...or maybe our prayers are being answered?

Lo continues to be the saving grace of this season. If it wasn't for her down-to-earth attitude I'm not sure anyone could tolerate this show. Also, she argues such good points. Been dating someone for four months? They should be your boyfriend. Agreed.

Jen Bunney is new and improved! Lip implants and a nose job? I wonder if she and Heidi got a package deal? It was hard to get past her to new look to actually listen to her talk, but she was so normal! She didn't just automatically go along with Heidi in hating Lauren and the accusation of Brody actually starting "the rumors" (YOU KNOW WHAT YOU DID!). She wanted facts.

The word homeboy is being introduced back into pop culture and it's not by a rapper, it's by a young white girl. Is it cold out? Is hell freezing over?


I can't help but think these kids are on the verge of discovering that something is missing in their life. I'm waiting for John Mayer's "Something Missing" to play at the end of an episode with previews for the next episode showing Lauren at church. It can happen! 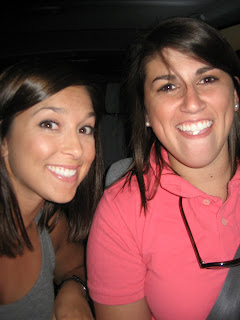 PART B: The Road Trip

I've never been to Heaven, but I know it's not like Oklahoma. Cops everywhere.
Pulled back into Dallas at 3am. No fighting at all. I think we have Reba to thank for that.
Posted by LC (and sometimes LB) at 9/04/2007