Ben has 11 women left with him in Puerto Rico and within 18 seconds he calls the experience, "perfect." I haven't watched yet, but there's no way that could be true! Perfect? I have my doubts, Ben. I have my doubts.

The gUrls seemed to have arrived via boat, much like some Cuban refugees arriving in Miami.

"Puerto Rico does it better!!!!!!!!!!!" -- Some gUrl
You're welcome, Puerto Rico. You didn't even have to pay for that advertising campaign.

Chrissy Poo welcomes the gUrls to PR and let's them know the date situation. Immediately after this Nicki learns that she's the "LUCKY" recipient of the first one-on-one date. In a great turn of events, he sent the card in Spanish and no one could read it.

Then, The Model goes on a rampage, only speaking in metaphors and cliches, about Emily being on her shit list. What's really funny about that is that, The Model is on MY shit list! I mean, what are the odds?! So, she better watch HERSELF.

Nicki picks out the ugliest dress in her closet. Being from the Metroplex myself, I'm quite confident she bought that dress at a TJ Maxx in Irving. She seems way over-dressed in comparison to Ben.

AND HOLY CRAP A HELICOPTER.
I DID NOT SEE THIS COMING.
A HELICOPTER?! WHERE DID THEY GET THAT?

"Nicki was married before and now she's divorced and that was serious to her." --Ben
Oh, wow. There's a profound statement.


"It's like God is smiling down on us right now." --Nicki
You are the only one that feels that way at this very moment. Trust me.


It started raining and stuff started getting silly after they made out in an alley! The two crazies took off their shoes and walked the streets of a foreign country shoeless! SHOELESS. Shoes are there to protect your feet from diseases and stuff, people. If they had any open wounds on their feet, they are donesies!

Ben and Nicki then picked up some "authentic" Puerto Rican clothes and again, Nicki picked out the ugliest thing ever. It's like she got a table cloth, cut it into a triangle and then got a dog collar and called it a dress.

THEN, NICKI COMPARED HER DATING RELATIONSHIP TO A WALL.

Ben said he had some "Latin swagger," while looking like a sad drug dealer and I was super offended and I'm nowhere near being Latin.

The dinner portion of the date began and Ben had on suspenders, just for the sake of having suspenders on. They are just hanging off of his pants. What a sad day for suspenders and fashion.

I cannot even talk about Ben's hair, because I've never seen anything like that before. 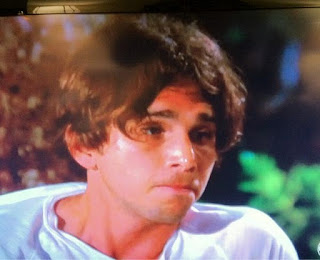 Nicki starts talking about her past and her divorce and Ben is like, "What do you even do? Do you do couples' therapy?" And. He's an idiot.

The other "ladies" are sitting around fighting about group dates and one-on-one dates. Well, Blakeley and Elyse are fighting, the others are just rolling their eyes. Kind of like me!

Nicki thinks CERTAIN people deserve second chances. But, not all people? Ben agrees and gives her the rose.

"I like learning things about you." --Ben
Saddest "compliment" ever.


Nicki seems to think that things "can be perfect" and I got even more sad than I was before because, well... things can't be perfect and YOU'RE ON A REALITY TV SHOW.

Next, we move on to the group date portion of the evening and in a twist! they learn they are playing baseball on a baseball diamond, not digging for diamonds.

The "ladies" are all wearing the tiniest "shorts" in existence and it's a sad day for dads everywhere as they watch their daughters "play" baseball wearing basically nothing.

Blakeley lets everyone know that she's "super athletic" and that she played in high school and college. She doesn't tell us what she played, but just that she did play. So, on that note, I guess I played in college, too, because well, I did play intramurals and stuff.

Also, Blakeley's southern drawl just come out of nowhere and she got all country ghetto.

We learn that there's going to be a baseball game and the winners get to spend the remainder of the evening on the beach with Ben!!!!!!!! TWIST.

Ben chooses Lindzi to play on both teams and gets the automatic invite to the after-party. I've decided that Lindzi is alright. Yes, her obsession with horses is too much for me, as an adult, but overall she doesn't seem catty or terrible and like she might have a decent attitude. This could all change next week.

The "ladies" go change into their uniforms and I'm quite confident the "uniforms" were borrowed from a group of six-year-olds. They are really small articles of clothing.

Ben just looks like a tool wearing that full-fledged uniform PLUS a wrist band. Plus a wrist band, Ben?

The bottom of the 2nd inning was Blakeley's time to shine and I'm not just talking about her bare-midriff. She caught like, two fly balls and even fell once while cussing! Just like a real baseball player!

"Defense your ass off." --Kacie, to The Model
I'm not sure that's the way to say it?

It was a sad day for baseball.

The accountant strikes out. The Blue team loses and they don't get to go to the beach with Ben.

Somewhere during the course of events someone told the Blue team they were playing for world peace, millions of dollars and their pride because their reaction to the loss was legitimately the most pathetic thing I've ever seen.

Then, the losers got on a school bus and the winners got on, shockingly, a HELICOPTER.

The Model spoke into the camera for 30 seconds and did not have one original thought about baseball.
Seriously, not one. It's like she watched a couple of baseball movies before her interview or something.

Kacie B. gets the rose.

The Model takes Ben away to the ocean and in another proud moment for fathers everywhere she brings up the idea of going skinny dipping, while airing her side boob to the world.

Elyse is like, super nervous for the date. So, we can blame her outfit choices on her nerves?

Ben takes Elyse on a boat, on the water (seriously, that's what he said) and that's where he dropped his Dentist mention for the epi.

If I was getting married and one of my best friends skipped out on my wedding for this, I would want them to drown after they jumped off the mega yacht. Luckily for me, about the time my wedding rolls around my friends will be having grandchildren, so it's not a huge source of anxiety for me.


Ben picks up the rose like he's about to make a really sweet speech and instead, he sends her packing. Right back to the Jersey Shore. Seriously, she looks like she belongs on MTV on Thursday night. her dress, her hair, her earrings, her accent.

WHERE DO YOU EVEN BUY A DRESS LIKE THAT?
I don't think I could find that dress even if I typed, "ugly dress" into a Google search.
She had to look for that thing.

They take a stroll along the water. Naturally.


In a real tug-at-your-heart-strings-moment, David Gray's "This Year's Love" starts playing as Elyse is crying and Ben is continuing his walk on the beach.

Ben looks out over the ocean and throws the rose into the ocean.
Sad day for roses and for David Gray.

And Ben's tuxedo?
I just can't even go there right now.

"Another one bites the dust." --The Model
Not only is that not her original thought, but she said that like, two epis ago. She's recycling unoriginal thoughts from her other monologues now.


About this time, The Model sneaks off to meet Ben in his hotel room. She makes more advances than George Meade's Union forces at Gettysburg (look it up) and offers him wine, a massage, shows him her boob and then says, "Let's go to the beach, we can have some fun and we can definitely do something else out there if we're feeling frisky."

She still has her clothes on and I'm confident her father has to be the saddest human on the planet at this point.

The clothes come off, they head into the water and then I became the saddest person on the planet. Is this what gUrls think they have to do to find a man? Really? This is the world I live in?


Ben says he feels "crappy" about what happened and I just find myself hoping that he has six daughters someday.

Ben used the word "rad" when talking to the Accountant.
They are so boring. He is so boring.

"I think he's perfect." --The Accountant
CAN THESE PEOPLE NOT SEE HIS HAIR?


Blakeley has "a lot" to tell Ben. Mainly that she "deserves it." Not entirely sure what she means because she didn't really say anything, but Ben seemed to think she "opened up," so I guess she wins out.

Of course, The Model finds a way to bring skinny dipping into the conversation. Of course.

Emily gets some alone time on the beach with Ben and she's all pouring out her heart and Ben just gives her a blank stare.

"I know there's some weird shit going on." --Emily


Ben tells her to drop it and tread lightly.
Oopsies!


Ben gives some lame-o speech about closing up and opening up and decisions.

Emily gets the final rose of the evening and I'm sad. I want to scream at her, "EMILY, you're getting a PhD! Run! Run!" But, no...she's still around and still on The Model's shit list.

The Accountant gets the boot. Not shocking. Two boring people don't make for good TV.

She cries so hard she gets hiccups. gUrl, go back to Oklahoma and crunch some numbers! You're better off.

Ben tells the "ladies" that they are headed to Panama City, Panama and I swear the look on most of their faces said, "I went there once on spring break! Oh, wait...that's a country?"

I happened upon your blog tonight. You have great insight and a wonderful sense of humor. I started getting interested in the show. It's like when see something that is so bad, unsightly or gross and you can't look at it but you put your hands over your eyes by making a slit so you can see it...kinda. Cause you just can't believe what you witnessing.

Yes, I believe Ben is that shallow...even if he doesn't wind up with C**tney. Who, in their right mind, would want a man that was skinny dipping with a woman while he's professing to be looking for true love with other women? He is the EPITOME OF MALE TRASH. And if he didn't pick C**tney, the one that he did should be dumping him about now. And get a decent hair cut!!!!! You look unkempt and greasy. Honestly.

hahahhaha. i can't stop laughing, LC. "it's a sad day for baseball."