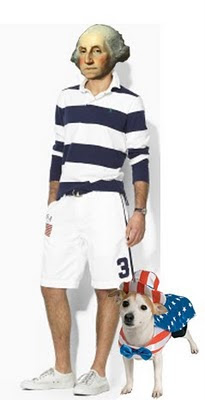 Tomorrow marks the 234th anniversary of the signing of the Declaration of Independence. Where this was, more than likely, a pretty formal event. I also imagine it to be one of those things that when it was over the boyZ started really celebrating. I bet they went outside, looked east to Great Britain and gave 'em the ole bird. I bet they said things like, "Effffffffffffff you, George!" or maybe even, "Suck it monkeys!" They probably drank a lot and then threw their bottles into the Atlantic as if they could actually throw a bottle all the way to England. I would also guess that there was some in-fighting and general mockery of one another's signature and/or wigs.
This weekend I encourage everyone to join together one more time and give George the bird. Turn east and tell the Brits that while the Magna Carta was a great document it's no match for the incomparable United States Constitution.
Tell 'em to read the Monroe Doctrine and to remember that while we may be a bit down in the dumps today, we're constantly singing Puff Daddy's anthem to ourselves, Can't nobody take my pride... Uh-uh, uh-uh...Can't nobody hold me down... ohh no...I got to keep on movin'.
In 1825 Thomas Jefferson ended a letter to Henry Lee with the phrase, Independence Forever.
So, to that, I take my bottle throw it to the east and say, "Independence today! Independence tomorrow! Independence forever! Suck it, monkeys!"
Posted by lc at 7/01/2010

you got more and more worked up as that post went on...as displayed by the increase in font size.

Thank you for that...I was laughing outloud at work. :)

you are a riot! And i'm pretty sure there is a black gurl hidden inside you! Happy Independance Day!