this is america II. 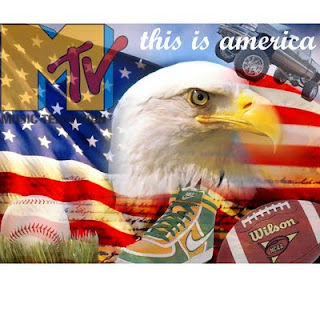 As promised...the next installment of "This is America. Bless it."
So, yesterday I'm driving home from work and I'm not in the best part of town, but I'm not in the worst part of town either. For example: a little over a year ago my completely unloved and terribly overused Chevy Malibu (pronounced Mah-lu-BOO) broke down, and I mean quit working, on the side of Interstate 35. I was just a few exits away from my office, but I called my Reg and he immediately said, "get somewhere safe," I came back with a jolly, "the only place less safe than here is Hell." If a similar scene would have happened yesterday I would have said, "There are only two places less safe than this: the place my car died the last time and Hell." So, anyway. You get the point about the quality of the neighborhood.
As I'm stopped at a stoplight my eye is drawn over to the sidewalk where a man and a woman were exiting a store. This is an everyday occurrence, not only in America, but the world. Had this man and woman been arm-in-arm or holding hands or had their hands on each other's butt cheeks I wouldn't have looked twice, but no...no, this man and this woman exited the store sharing an electric wheelchair. The man had "wheeled" himself out of the door as the woman held the door open for her beloved and then proceeded to take a load off and sit on the man's lap. Yes, that's right the woman, who had two working legs, clearly couldn't bear to walk any longer and needed a ride in the lap of her lover's electric wheelchair.
The story ends there because the light turned green, but I'd like to think they rode off into the sunset and are currently living happily.
**Lately I've been seeing a lot of electric wheelchairs around town. More and more I am seeing as many people with electric wheelchairs as I am people with bicycles. I'm always worried that one of these days one of the wheelchair operators is going to lose control and get too close to traffic or something...well, about a week ago I saw a man in an electric wheelchair (tricked out with one of those tall, bright orange flags like ones that are on soccer fields or go-carts) sitting at a stoplight in the right-hand lane just waiting on the light to turn green. He was obeying the traffic laws just like every other motorized vehicle around him and no one was paying him any attention. I mean, what in the world? That's not ok. That's terribly dangerous. And only in America would drivers sit idly by and watch a man maneuver his way through rush hour traffic in an electric wheelchair.
This IS America. Bless it.
Posted by lc at 9/29/2009

I would normally be shocked and appalled... but I was a Memphian(?) for approximately 2.5 years. I swear I stopped behind a motorized wheelchair on my way to school every.single.day. I'm almost relieved to know it happens elsewhere.

i stopped in the left-turn-lane today behind a man (well at least that is my best guess) on a tricycle. Now i understand that we treat bicycles as motorized vehicles because those things can really move, but a tricycle? I bet that thing maxes out at maybe 3 mph.

i totally know the guy you're talking about. i think i he lives near our neighborhood, b/c i see him all the time. at least he is a law abiding citizen and obeys traffic laws! PS: in my opinion, no dallas neighborhood is completely safe!