but, i need to know why. 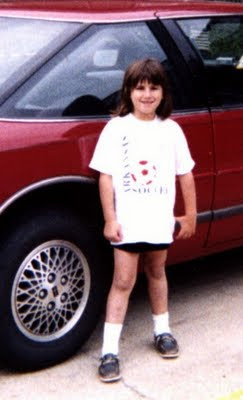 No, seriously...I need to know why this photograph was taken. It's more than obvious that I was incredibly cute and well-dressed (hello, navy boat shoes and tall socks with hammy-down shorts from the brosef), but why did this need to be captured in time right there next to the family Oldsmobile? This might be the most random photo of me ever taken. And I might secretly hope that all of my children look like this someday, but act like their well-behaved, mature and mathematically smart father (that is of course based on the assumption that he actually exists).
Side note story #1**: In kindergarten, I turned five years old. I thought this birthday was especially awesome because my birthday falls on the fifth day of October. The theme for my birthday in my head was, "Turning 5 on October 5." Anyway, my teacher asked me what I was doing for my birthday and I told her my family was driving to Dierks, Arkansas to watch a football game in our new red Oldsmobile. I also told her I was scared that it was going to get hit by lightning and I wanted my family to be safe. I guess I was mistaking my brief time of sharing in my kindergarten class for prayer requests.
** I tell that story about the red Oldsmobile, because looking back we have more family (and obviously solo, too) pictures next to that car than any other car ever.
Side note story #2***: One Thanksgiving morning (I believe I was in first or second grade) my family was getting ready to load-up and head south to The Sprangs (Mineral Springs, for those of you who aren't familiar with the lingo). The Reg was in the garage tweaking with the engine on the red Oldsmobile when out of nowhere the door to the kitchen flew open and he came in yelling, "That damn Oldsmobile just blew up!" Being the young child that I was, I was confused and asked a lot of questions, you know questions like, "Why didn't I hear an explosion?" and "Can we still go to Grandmother's?"
Turns out, the car didn't actually explode. Just something like it. And not too long after that The Reg purchased a brand spankin' new (and by new, I mean, never owned, but had been on the lot for 9 months) Chevy Lumina APV mini-van. Two-tone, no less.
***I told that story because I think it's hilarious and I'm standing next to the car that "exploded" in the above picture. Oh, the memories...
Posted by lc at 8/05/2009

Wasn't that picture taken at the state soccer tournament in Jonesboro?
Obviously, you don't remember the Olds dying on South Arkansas as we were driving down the road. I do...

Thanks for the shoutout to Howard Co!! I was laughing all the way through this one!