I have a crazy memory. Definition of crazy memory: I can remember absolutely everything from my life. Dates, times, places, people, outfits, songs on the radio-- everything (well, everything minus exact conversations, a trait that seems to make a lot of people very unhappy). I can't lie and say it isn't a great thing to be able to remember your life at such a high level, but there comes a time for everything to be etched into the internetS, which is what I am planning on doing...NOW.

This past Saturday, March 21, 2009 I ventured down to Alamo-town, San Antonio, with my friendly of Choose Your News fame, Deano (SHOUT OUT). Long, long ago when we became friends we discovered our completely uncommon love for most people our age for Designing Women, politics, Billy Joel, John Wesley and our not so uncommon love for Reba, Celine Dion, Mallory Hardin (SHOUT OUT) and hair products.
The friendship has remained true to its roots to this day, which is why when I discovered that Sir Elton John and Billy Joel were playing in my fair state there was only person I would even consider going with. I knew from the time that she agreed to venture into the great state of Texas that this day was going to be life-changing, I just didn't know on what scale. Turns out, there isn't a scale to measure this type of change in a young (or semi-young) person's life, because how do you even begin to measure FREAKING AMAZING? Yeah, I don't think you can.

Long story short: Deano and I were preparing to trek up to the summit of the AT&T Center. We were devising our plan of attack when a man sprung from a corner and asked where we were sitting. I was completely confused and a little nervous (danger stranger). But, Deano being the champ that she is remained calm and collected and let this man know that our tickets were more valuable in our hearts than what the ticket stub actually said. He was sold and promptly handed over two front row tickets for us to use at our discretion. But, we had no discretion and immediately ran down to the front row. I was in shock for most of Elton's show, but loosened up when the Piano Man finally took the stage.

This concert changed my life. And not just because of the drunken couple next to us making babies. No, this concert just proved that good things really can happen to good people. I'm absolutely without a doubt convinced that Mr. Billy Joel read my post about Ashley Scarlett and sent his tour man on a hunt to find me and reward me. And to that I say, "Thank you, Ashley Scarlett and thank you, Billy Joel, do you mind if I call you Billy? Thanks, Billy." 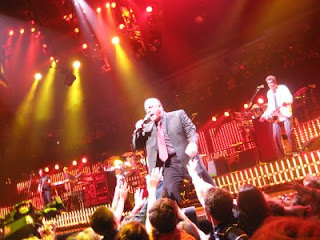 Billy singing, "We didn't Start the Fire." I honestly cried. I mean, what a great historical tribute to our nation and its flaws. 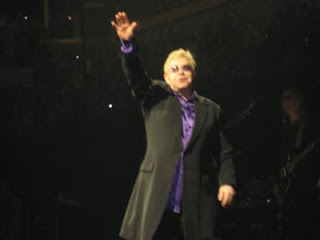 Sir Elton waving to some people really far behind me. Deano and I met the lady he wrote, "Candle in the Wind," for in the cab line after the concert. Ask me about it sometime. 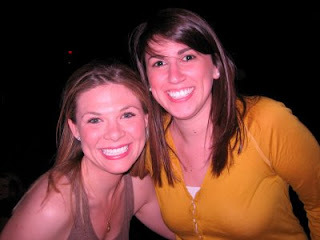 We got a member of the Roloff family to take our picture. 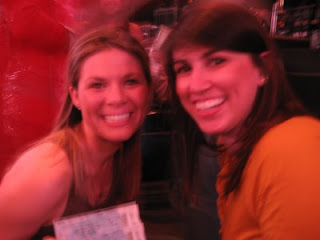 Then, we got two slightly intoxicated Elton fans to take our picture with the tickets. Thanks for nothing.

Just so you know - I am insanely jealous of you right now. I have seen them in concert, and was prepared to sit nosebleed to see them again - but I had to work! A little hurt that you wouldn't have considered venturing to the SA with me, but whatever, it is because I love Elton - I mean LOVE.

I have seen these two in concert several years ago and it was amazing, however it wasn't from the first row! Too cool!
Also cool that you and JD hav stayed in touch. Fun to know I was there when it all began! Girls State...holla!

How much fun you two must have had- your mother's very jealous!

I LOOOVE Elton! I want to hear about this cab lady that he wrote the song for...please, update me. For some reason, your blog shows on my blog's page, but not on my update list...this whole blog thing is still really confusing for me. Natural blonde? I do say!