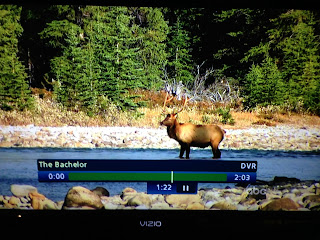 Sean wants to get back on track this week, so he stands atop a giant brush pile in the Canadian Rockies to explain to us the difference between Montana and Canada. Never too old to learn, gang!

In an attempt to let Chris Harrison show his range, ABC let him stand outside and explain the rules to the gUrls. He all but gets out a map for these ladies to explain to them where they are currently located. He told them to pack their bags and be ready to head south of the border the second Sean doesn't ask them to accept a rose.

Catherine gets the one-on-one date. She's ready to brave the Canadian wild in a pair of earrings she stole from the Pussycat Dolls.

Catherine is forced to stand outside in a blizzard and wait on Sean to pick her up in a giant truck/bus/tractor. Actually, kind of cool that they let Sean drive that thing.

Not cool?
Playing outside on a glacier all day.

They busted out that cheap Target sled as if they were just two small kids enjoying a snowy afternoon in Central Park. Love conquers all.

"Catherine and I are sledding...we're making snow angels...This is what I want in a wife." --Sean
PRIORITIES.

Later, Sean and CathyCat take a carriage ride to a giant ice castle. Inside the ice castle is a cheap couch from Pier One. : (

Sean calls it the most romantic setting he's ever been in. I call it a dorm room on ice!!!!!!!! LOLOLOLOLOLOLOL.

CathyCat is ready to tell Sean "what he doesn't know about her." I think he wants to know if the nose ring is the result of a lazy Sunday afternoon in college OR you know, daddy issues.

CathyCat tells a story about a tree falling in the woods. (I AM IGNORING SO MANY JOKES HERE, BECAUSE I TRY TO BE SENSITIVE TO TRAUMATIC EVENTS.)

When Cat's story is finally over, Sean says, "thank you."

The seven gUrls on the group date are forced to canoe across Lake Louise in order to jump into Lake Louise.

One summer I was forced to kayak across Table Rock Lake in Missouri and I almost died 100 times!!!!!!!! And I have two fully-functioning arms and was wearing a bathing suit and shorts. It was one of the worst experiences of my life (K-2 SHOUT OUT! B.MAYES. KITTY KAT HARRIS! MEOW!).

THEY ARE MAKING A gUrl WITH ONE ARM CANOE ACROSS A GIANT LAKE.
Soak that up, people.

Also, what do these gUrls think they are doing for the day? NOT A SINGLE TOBOGGAN IN THE GROUP. Like, gUrl, your head is gonna be cold!!!!!!!!!

They finally make it across the lake. GREAT JOB, SOULSURFER. You are a true American hero.

Sean tells the gUrls he has a surprise for them.

THAT ONE gUrl IS WEARING A DENIM JACKET. IN THE WINTER. IN CANADA.

The surprise is the "opportunity of a lifetime!" The gUrls can strip down to their 'kinis (short for bikinis and I'm copyrighting that RIGHT NOW) and jump into the lake! Of course, this will all be supervised.

"You understand that this lake is glacier-fed." -- Medical Worker
: (
There's no way that made sense to them.

The rules are: get out of the water as fast as you can.

Remember: Selma is from Baghdad. It's a desert there.

Sean tries to convince her to do it by telling her, "you're only going to have the opportunity to do this once in your life." YOLO, IDIOTS.

And in the smartest thing she's ever said to anyone, she looked back at Sean and said, "Bitch please! I can come back and do this any time I want. I BUY MY OWN DIAMONDS AND I BUY MY OWN RINGS!"

In a fit of rage, Tierra throws off her Faded Glory red pea coat and strips down! She's ready.

AshLee isn't quite there yet. She's doing it for Sean and no one EVER IN HER LIFE has made her want to do something for them. Ever? Really? I need to know more about this, gUrl.

Everyone who did it is super pumped afterwards and you know what, you go, gUrls!
Go gUrls, go God! (SHOUT OUT, KITTEN.)

Tierra is not so lucky. Her body can't handle it. She looks unresponsive. Sean's not a professional, so there's nothing (NOTHING) he can do to help.

"I think everyone is aware of hypothermia." -- Sean
Too much credit is being given here, SeanBoy.
So: Hypothermia Awareness Web site

NOW EVERYONE IS AWARE OF IT.

Tierra is as close to death as she's ever been. Minus that time she fell down the stairs.
This is serious. (Side note: hypothermia/low body temperature seems like a really hard thing to fake. This gUrl loves a challenge!)

The medical worker on the scene wraps her in a blanket and hands her a venti coffee.
Wait. What. Is that what you're supposed to do?

Destinee and CathyCat go downstairs to check on Tierra and seem genuinely appalled that SeanBoy made these gUrls jump in the lake.

"She. was. disheveled. I've never seen anyone look like that." --CathyCat
DITTO COWLING.

IN A PIECE OF PERFECT EDITING, CathyCat's concerned voice over says, "She looked in such a horrible state, it makes me think: what about the gUrls?" right as the other gUrls roll back in screaming and celebrating. It was perfection. GET THESE PEOPLE AN EMMY.

The gUrls think Tierra is faking it. (How can you fake this?)

Sean, in giant basketball shorts, rolls in to check on Tierra and they giggle and giggle and Sean calls her out for managing to get one-on-one time with him via medical emergencies. DON'T HATE THE PLAYA, HATE THE GAME, SON.

Lesley gets some special time with Sean and she lets the world know, "I LOVE love!"

SoulSurfer is blinged out in a sequined tank top and she's ready to surprise Sean.

Weirdest surprise ever: she printed off some photos in black and white and showed Sean. THEN, SHE GAVE HIM THE PHOTOS. Too soon, baby gUrl. Too soon.

Hypothermia be damned! Nobody puts Tierra in a corner. She's going to that party.

The gUrls at the party are sitting around re-hashing their favorite Tierra moments. And then she walked in. SILENCE.

The shit hit the fan. But, really that's not a fan, it's a glacier-fed wind!

"Watch your back, we have a Tierra-or-ist on our hands." -- Lesley
I see what you did there!

Sean asks Tierra if she wants a proposal at the end of this "journey." She gives a weird answer about "smiling through the door," and is interrupted by Lindsay.

The second Lindsay sits down Sean tells her they can spend all of their kissing. If she wants. And that's what happened!

Sean gives Lesley the rose. She loves love and she loves Canada.

After the group date night party, Sean is ready to cut ties with SoulSurfer. He steals her away and takes her to another hotel room to "talk out how he's feeling."

Sean wanted it to work so badly, but it's not there. He appreciated the family photos, but you know. TOO SOON.

He doesn't want her to just sit around all day, so PACK YOUR SHIT AND LEAVE.

SoulSurfer heads back in, tears a flowin', and tells the gUrls she's headed home. This always happens to her. Always. This ain't her first rodeo.

SoulSurfer gets in the limo of pain and torture and heads back home minus love and approximately six family photos.

This is her second one-on-one, so gUrls be mad.

She wants to take the date card very literally. She doesn't want to be scared to fall in love.

Sean made Destinee climb up that mountain for a picnic. But! TWIST! The picnic is down below. (Sound familiar???????????? That's why he sent SoulSurfer home!!!! He's date recycling already!!!!!)

Sean wants to show Destinee that if you commit to something, you can make anything work. This is a lie. A LIE. I was super (SUPER) committed to Calculus for Business Majors my sophomore year in college. I had a tutor two or three nights a week, I studied, I went to class. I was committed. I took one test and got a 41%. I dropped the class and switched majors.

Destinee sees this rappelling opportunity as a metaphor for relationships. BORED.

"I'm so glad she got to experience that." -- Sean
That just feels like a weird thing to say.

"Are you a tree climber?" --Destinee
Is that a thing? It's not a thing.

So. Yeah, they climbed a tree and kissed. Felt very 'Hunger Games'.

Destinee is ready for the nighttime activities because she wants to tell him how she feels. They are putting Montana behind them and moving forward together in a teepee. 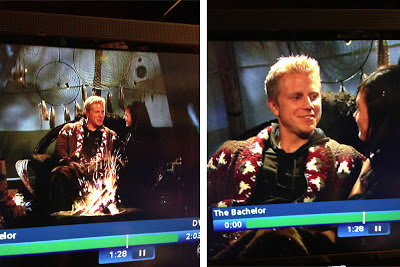 Sean asks Destinee if she hides her feelings when she's upset. She says, "YES, but! You can ask me anything." Sounds like a sad Facebook "about me" section.

Destinee tells Sean she used to live in a tent. She didn't have money growing up.

Growing up poor didn't hurt Destinee. She's not bitter. She just wants to have a house full of love (with a game room and two-car garage) and puppies! She also wants a man who is assertive.

Would an assertive man wear that sweater?

Why are they in a teepee again? Should I be offended for Native Americans? This is a touchy subject.

Lelsey is confident tonight. She has a rose and a sock bun!!!!!

Tierra is wearing a slip (like, what goes under a dress) and a fur pelt.

Sean, your suit is too much. Pick a style! You're all over the map.

Selma is no longer staying true to her mother's culture. Baby gUrl came to play. So did her cleavage.

Culture be damned! She's going to kiss him on television.

Selma kissed him and Sean said, "thank you."

Selma said she had to bring out the big guns tonight.
She means her breasts.

Lindsay and Sean go hang out on a wicker love seat and Lindsay says she is NOT going to kiss him. Sean is pissed. He gets un-pissed when ole Linds reveals that she sleeps naked. They kiss. Gosh, that gUrl is disciplined, right?

AshLee gives him a scarf and tells him to blindfold her and it signifies something about vulnerability and imagining the future. SHIT IS GETTING WEIRD.

There are only three roses to hand out. Chris explains the math. Five girls, three roses. TWO gUrls are going home!!!!!!!!!!! That's an American-educated man, y'all!

Selma and Daniella are going home.

Selma abandoned her morals, her culture, her mother's hopes and dreams for this and now what?!
PTL she didn't jump in that lake.

"It's tough to have your heart broken." -- Daniella
You didn't even go on a date! Oopsies!

Sean tells the gUrls that he's optimistic about where they are headed and that's to Saint Croix! He specifically tells them to pack their 'kinis.

In the previews for next week we have: beaches, tears, linen shirts and bullshit.

Perfection, LC!!! Also, did anyone else notice that AshLee said she "hates being blindfolded?!" Is that even a thing?! Either she had a traumatic experience with a pinata in her childhood OR she's got a penchant for picking some real freaky dudes... I'm just saying...

so so so funny, as alwasy, LC...you don't even know me...but I found your blog while doing a little blog hopping last year...maybe thru Kelly's Korner...or Katie's Keepers ?? anywho -- LOVE, LOVE the recaps!!!
Leslie