We see the boyZ before we even see Barbie Emily this week and that's because EMILY HAS ALREADY LEFT CHARLOTTE FOR THE BEAUTIFUL ISLAND OF BERMUDA.

Well, holy hell, Chrissy Poo Harrison, one side of your collar is starched more than the other. Get at me.

We head south to spend some time with Emily and Ricki. The next three minutes are what I'm going to call a "montage of weirdness." Ricki is far too old for Emily to be picking her up and holding her like that. And Emily wants this to be known as a "normal family vacation." A normal family vacation where mommy brings 12 dudes along and kisses some of them and leaves you in a hotel room alone with a stranger. PUT IT ON THE CHRISTMAS CARD.

The boyZ get to Bermuda and Doug learns that it's finally his turn for a one-on-one date. Doug has a little trouble understanding the premise of the one-on-one date. He asks several times, "If I don't get the rose, I go home?" He again reminds us that he has a son and that HE PUT HIS ENTIRE LIFE ON HOLD FOR THIS. That's how I feel every Monday night, Doug. You are not special.

The boyZ really mess with Doug's psyche before Emily arrives and it felt like a mix between a sad, sad sleepover and a weird middle school locker room where everyone was basically dressed alike. And kind of like a shitty cult that couldn't really agree on anything except who they are worshipping and clothing choices.

FOR THOSE OF YOU AT HOME: If you don't get a rose, you go home. That's the rule for the whole show. No rose, plane ticket home. Got it?


Doug and Emily go shopping. They "get each other."


"This is what married couples do. They walk around town." -- Emily
I've had it wrong for so long, gang.


Emily asks Doug, "how did you get to be the way you are now?" That's such a loaded question. My answer usually includes: a shit ton of Beverly Cleary books, Mary Tyler Moore and the 1992 election of President William Jefferson Clinton.

Doug, on the other hand, said: my grandpa and a conversation with his son about one person changing the world.

Doug started a charity because "Superman wasn't going to show up." Who wouldn't want to get involved with that great cause?

Doug and Emily write a postcard to Doug's son and Doug described it as, "something a mom would do." Or maybe just something someone on vacation for a long period of time would do?

The two then walk through the Moon Gate. Listen, y'all, it's a Bermudian tradition about having luck and love. You hold hands and walk through it together. After they walked the four steps through the gate Doug said, "I could do that 100 times, that was awesome." You know what, Doug? I could probably do it 1,000 times!!!!!!!!!!!!!!!! You don't even have to do anything! Why would you even want to do it again? It was a concrete arch that looks exactly like a concrete arch.

It's time for dinner.

I'm stressed out by Doug. Emily is stressed, too. He reminds her of Brad. Oh, shit! It's about to get real.

Emily asks Doug if he's perfect and Doug says no, but he's an idiot and then says his ex-girlfriend was mad at him for not washing her car enough. OVER IT. Then, he tells Emily that being stubborn is NOT a fault. WHAT PLANET ARE YOU FROM, DOUG?

Doug gets the rose.

Before the date all the boyZ headed to the Gap and American Apparel to get some matching, but not quite matching outfits. Yes, outfits.

We're about to go sailing! The boyZ learn that while sailing, teamwork makes the dream work. And then, they learn they are going to be racing the sail boats! Against each other!!!!!!!!!!!!!!!!

Have you ever been so nervous? Me neither.

The winner of the race gets to spend the evening with Emily. I'm assuming that's the prize, but then the losers probably just get to go back to their beach condo and drink all night. Not sure if there are any real losers here tonight. Scratch that, there are a lot of real losers. Just not when it comes to racing and prizes.

"To be honest, I hate watching guys compete." -- Emily
oh, gUrrrrrrl. Oh, you silly gUrl.
WHAT ARE YOU DOING?
This show is a competition.


Who are these people that loaned their boats to these yahoos? I'm guessing they are rentals. Oh, look. A guy that's not a contestant on the show is driving the boat. LAME.

"When we got to the finish line, I felt defeat." -- Charlie
That's because you lost.

The van ride back to the hotel for the red team was like, WHOA. Charlie cried. I think he was crying anyway. Sure looked like he was crying. I mean, those guys were acting like it was a real boat race for a real prize. Get it together. Be a man.

Ryan starts off the party with a toast about Emily being a trophy wife. Everyone seems offended. But, I mean, is that really such a terrible thing to say? There are so many worse things he could've said. I could list them, but you'd quit reading.

Ari "steals" Emily away from the other boyZ and they kiss and talk about patience and other bullshit and Emily slaughtered a lamb earlier in the day and then made a blanket.

Then, it's time for Jef (just one 'F' here, folks). Jef really likes who Emily is, but he doesn't know how Emily feels. But, when he thinks about her, he likes her. Which, let's be honest that's far better than the alternative.

Ryan gets his special time with Emily and he starts out with a bang!

"There's a lot of depth here... I have a mature approach to relationships... I'm not here to impress you." -- Ryan
Emily's response was, "you're very interesting to me." OOPSIES. Then, she quoted her favorite offensive things that he's said to her.

He shifted from telling her not to be fat to telling her that she's a role model and he wants her to use this opportunity to impact tons and tons of people. Which was his lead into telling her that he saw her kiss Ari before the rose ceremony last week. Emily felt judged. Which is exactly what was happening, baby gUrl. He was judging you.

It's time for the two-on-one date, but first Emily spends some time with Ricki by the pool. You know, just a normal family vacation.

Nate and Wolf pack up their shit in case they don't get the rose. You'll remember: if you don't get a rose, you go home. Got it?

The boyZ left in the hotel room are talking about age differences. They are arguing, but all I can focus on is the fact that Doug is wearing a hoodie sans shirt. GROWN ASS MEN DON'T WEAR HOODIES WITHOUT SHIRTS UNDERNEATH, DOUG.

I'm already bored on this two-on-one date. Maybe that's because Emily told me for the 98th time that the water is a "beautiful turquoise."

Shocking, ABC. Shocking. They jump off some cliffs.

They have dinner in a cave and we hear the word, "cool" 14 times. These people have huge ass vocabularies.

It's like, so awkward that the boyZ don't even want to eat.

Nate's wearing a khaki blazer in a cave with a salmon v-neck t-shirt.
Everything about that sentence is weird.

Then, Nate starts crying as he scrolls through his Facebook friends in his head and talks about them to Emily.

Wolf gets the rose and Khaki Blazer packs it up and is sent away on a boat. ALONE.

Oh, Emily has on a three-quarter sleeve snakeskin jacket. Every gUrl needs one of those in her closet.

Before Emily leaves for the party she asks Ricki if she's done her homework. If Emily cared about her schoolwork she wouldn't drag her daughter to Bermuda during the middle of the school year. And did you get a glimpse of that homework? It was just scribbles on paper. And not even good scribbles. Like, real shitty scribbles. 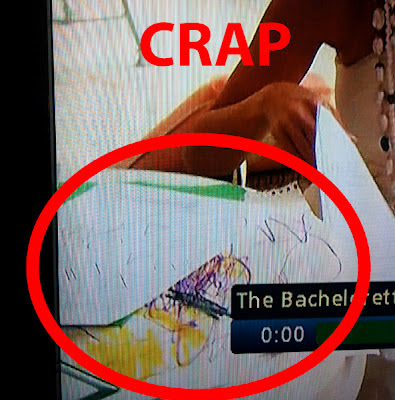 Ryan lets everyone know how confident he is about his connection with Emily.

You know what I'm not confident about? That weird ass ponytail extension. It looked like a cartoon broom.

All the boyZ have decided that Ryan is not the one for Emily.
I think Ryan's the one for Ryan.

"I want someone who always has my back." --Emily
Yeah, who isn't looking for that in a mate for life?


All of Ryan's interviews are quote-worthy.
That's what happens when you're a huge TOOL.

Sean finally gets some time with Emily and I'm hoping he reminds her how perfect his dad is again. Damn. He doesn't. But, I think I saw his tongue when he kissed Emily. When they were done kissing she said, "thank you." He said, "you're welcome." WEIRD.

Doug and Ryan get together and talk about not kissing Emily and not being younger. I really hope Ryan sends Doug's son a postcard soon!

Chris drags Doug outside "like a grown ass man," because he's never going to back down to him. Doug giggles the whole time.

"Christopher!" --Boy with a high-pitched voice as Chrissy Poo entered the room for the most dramatic rose ceremony ever

Emily is NOT taking this lightly.
You know what's not light?
That horse tail hanging from the back of her head acting like a human person's ponytail.

Alejandro has two earrings. That's one in each ear.
Two earrings.
He's an adult.

"I've never been in love before. I hope that I fall in love." --Michael
Then, he cried. Which was just embarrassing.

"It sucks that I am not going to be continuing on this beautiful journey that I've started." --Charlie
Yeah, it sucks.

We learn that the whole gang (PLUS RICKI) is headed to London.

I sure as hell can't wait!

LC, I can't believe you had nothing to say about the guy wearing shorts and knee socks at the rose ceremony!!!!!!! I was looking forward to it all night.

I am a hard critic, but your bachelor/ette commentary is extremely funny. Keep it up! --Kelsey (3rd floor, or was it 4th? Reid friend)

I am a hard critic, and I think your bachelor/ette commentary is extremely funny. Keep it up! --Kelsey (3rd floor, or was it 4th, Reid friend)

Found this through Mare's blog. Huh-larious interpretation. Ari creeps me out though. Too much hair touching and intense face holding.