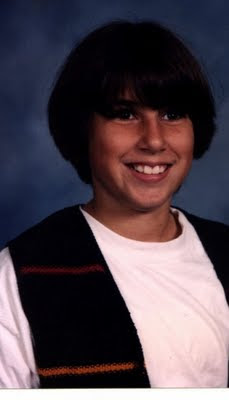 That's me as seen in my 6th grade yearbook. Ignore the hair and vest for a moment and consider a question, "Would you find this person to be credible?" Absolutely not. There's no way in hell any normal person in the world would ever think that a 12 or 13-year-old has any credibility whatsoever when it comes to deciding anything of any substance.
That kid up there in the photo, at 12, had a bowl cut and really enjoyed reading R.L. Stine books. This is a person who clearly knows very little about life.
So, why the fuss about a middle school yearbook naming George W. Bush and Dick Cheney as two of the five "worst people of all time?"
This story is getting tons and tons of national press. It's been called "a tasteless attack," and a "low point." You know what I call it? A FREAKIN' MIDDLE SCHOOL YEARBOOK.
Sure, someone clearly missed something while editing it, but are there really people out there who believe that "Desperate Obama supporters are apparently attempting to influence middle school students who probably will not even be voting for the first time in 2012." Heaven help us if this is true.**
Now hear this, I wouldn't put W. or Cheney on my top 1,000 list of all-time worst people. Most people wouldn't. I'm really anxious to see if Bush's people release a statement on this.
Anyway.
All that to say, God Bless America-- the place where even middle school students have the right to accidentally (or not) call W. one of the worst people of all time and then have it covered up with removable tape!
This is America.
Bless it.
And. Oh yeah, GO GALES.
GO RUSSELLVILLE.
Story links:
Fox News
Houston Chronicle
Atlanta Journal Constitution
**Side note: And then, then there's this from the Lubbock Avalanche Journal. The stupidity in this is almost too much to quote. Clearly, my favorite line is this one, "It is of interest to determine whether this is a problem with the yearbook of only one school or whether the same message appeared in many school yearbooks nationwide."
Posted by lc at 6/03/2011

So my question is, does the Lubbock fellow seriously think that Obama conspired to print this list in the RMS yearbook? Wow. I mean, obviously I can see why he/the administration would target such an influencial group as the 6th and 7th graders of Russellville, AR. Of course. But the people who would be assinine enough to be swayed by a list in a middle school yearbook most likely wouldn't be voting anyway. DUMB.