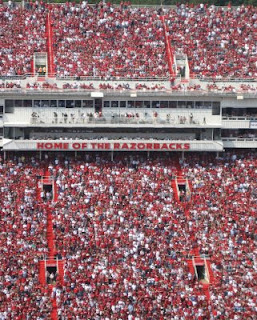 I have been attending Razorback sporting events since I was in the womb. When I learned to walk, Reggie drug me from Pulaski Heights United Methodist church down a street named after a president, across Markham and into War Memorial Stadium, where our seats usually bordered the visiting section. When I was old enough to dress myself I started wearing opposing teams colors. When I learned to talk, I'd yell for the other team. This carried on for many years. Many years. Probably until I was 17 or so and realized I had no other option for my higher education than the institution I had been mocking for so many years, the University of Arkansas.


I never thought my actions as a young child would come back to haunt me, but they have. We lose and we lose bad. Our band performs a minor miracle at half-time and half of the fans leave. What has Razorback football come to? Am I being mocked? Does Jesus hate the Razorbacks? I can't answer any of those questions, but I can look forward to the future and hopefully, as always, the Mississippi State Game.

Until then, I will gloat on our 1964 National Championship, Darren McFadden, Felix Jones and the monstrosity that is the Jumbotron.
Posted by lc at 9/23/2008