This is the second in a series of posts about events in my life that made me who I am today. 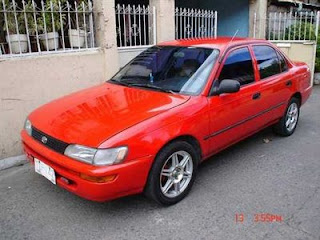 *This is not my actual car. It looks exactly like it though.

I could think of a million things to say when I talk about the day my father called me on my cellular phone and told me to meet him, "at Farm Bureau Insurance, over by Staples." After inquiring why, he had told me that he found a car for me.

This phone call came after a month or so of scouring little Russellville, Arkansas for a small SUV. Reggie had all but convinced me that he was going to buy me a two-door Explorer Sport or Blazer. I just knew I'd start my junior year of high school in style.

Instead, I turned the corner to meet ole Reg and saw it. The brightest, bright red little Corolla you've ever seen...even better, it had a huge FOR SALE sign on it. My lucky day.


I drove that little machine for two and a half years. My friends used to steal my hubcaps for fun. One weekend, I went to Bentonville and parked it on my friend's street. Someone threw a pumpkin at it and broke the antenna off. I got in a wreck once. Reggie fixed the bumper with duct tape. True statement. Manual doors. Manual windows. Tape deck. It was a fine piece of equipment.

When I first started driving it I was completely embarrassed, when I took it to college, I was even more embarrassed, but really, honestly, driving that car taught me that people will be your friends no matter what kind of car you have. Especially if you can stuff 16 people into it and drive it in the homecoming parade.

That car taught me more about humility and character than anything else in my life ever could. I will never drive a Lexus or a Range Rover, simply because of that little red Corolla...and I work for a non-profit and can't afford one.

It looks like that picture was taken somewhere outside the United States.

my corolla was a 1976 datsun pickup. you could see the ground when you shifted...it was beautiful.

Sweet. That makes me think about my first car. An 84 VW jetta. It was a heap when I go it. I did convince my father to look at an old corvette one day - but he had no intention of buying it.