I spent this past weekend in Philadelphia.
This blog has seen the phrase, "the happiest I've ever been" on several occasions, but I think honestly, standing in the room where the Declaration of Independence was signed was truly, the happiest I've ever been in my 25 years of life.
There were several moments where I found myself thinking about all the what-ifs. What if Thomas Paine didn't think it made sense to fight for rights as Americans and not as British colonists? What if Teej didn't hold any truths to be evident? What if John Hancock was a coward? What if John Adams didn't want to fight? The list could go on and on...What if Britain would've recognized what was actually taking place and sent troops sooner? I'll tell you what! Lots of important men would've been tried and hanged for treason. The dreams of a free America would've been put to rest and we would have to rely on the likes of Millard Fillmore to start this great nation (I'm beyond glad this wasn't the case).
Can you just imagine what America would be like without a peaceful transfer of power every four years? That's a place I don't want to live. I'm so very thankful that my boy Teej and his band of rebels had the fortitude to imagine a country I'm proud to call home. 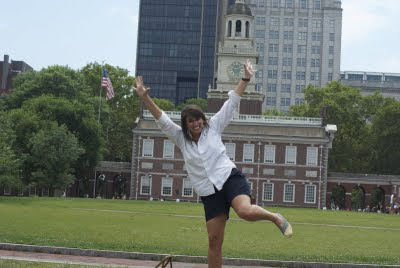