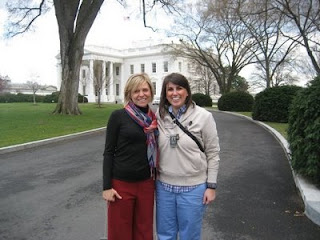 There are a million different ways you can meet someone: You could be introduced through mutual friends, move past the buffer zone and decide to forge ahead with the friendship. You could meet someone by chance and exchange phone numbers. You could work with someone and decide to be friends outside of the office. Your parents could force someone upon you. You could meet in Sunday school. You could meet in rehab.
Or.
You could pursue a friendship over g-chat like, my dear friend (I think that term is appropriate here, given the number of hours we have actually spent together: 3), Corrie and I have been doing for two or so years now. My friend Risa was constantly obsessing over her "grad-school friend Corrie" who was hilarious and I decided I wanted to be her friend and thus, a friendship was born.  She has since became one of my most loyal blog readers (I like to think of them [the readers] as blog enthusiasts, actually) and someone I can constantly bounce history facts off of because she works at the National Archives! She's like the gatekeeper of all the greatness in the U.S. She loves to have me photoshop her or her boyfriend's head on other's people bodies and she gives sound advice on the following life categories: friendships, relationships, jobs, Republicans, when to clap or not clap (like, should we clap after a prayer? Like, if it's really good?), g-chatting while working and one time she helped me decide if a pair of loafers were somewhat butchy.
Corrie is finally get a much deserved SHOUT OUT because she was featured in Washington Life Magazine as one of the Philanthropic 50. Now, do I really know what this means? No. But, am I so proud that she shared this feat with me? YES and YES.
She's obviously very good at her job, which surprises me somewhat, because when we went on a tour of the White House she would hear about the job of a secretary or aide of some sort and would exclaim, "Oh, gosh! I could never do that job! I bet there's no time for g-chat." But, hey-- I love surprises.
Congrats, Corrie. I bet your mother is clapping really loud right now. And keep up the g-chatting at work, it doesn't seem to be affecting you much!
Posted by lc at 6/11/2009