it's about to get all political up in here. 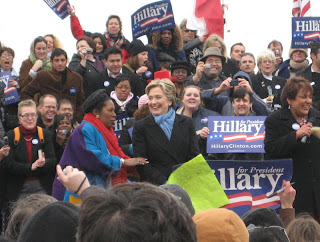 I must admit I have not cared a great deal about politics since my days back at ole RHS. I was the VP of Young Democrats and an avid hater of all things George W. Bush. But, most of those political convictions came from my mother and knowing that my best friend's dad was a Democrat state senator who was a personal friend of William Jefferson Clinton. Clinton was a Democrat, so I was a democrat. I cheered when states went blue and then I went to college...my political convictions became my own and somewhere down the line I became a conservative Democrat, some might even call me a liberal Republican.

I cannot say that I am a Hillary supporter. But, I also cannot stand that women bash her without learning about her. I am not a super-feminist Nazi, but I am an independent woman who was taught that I can do anything I want if I put my mind to it. Hillary's doing it. She's blazing a trail. How can you not support that? How can you not respect her? You can not agree with her policies all day long, but why in the world would you fervently disagree with a woman that you only know as Bill's wife? Do some research, you might just like her as a person. I know I do.

I love it. You make me laugh, and I'm really glad I have a friend with the same background and political affiliation. Liberal Republican or Conservative Democrat...it's tough. Love you!