I have lost sleep over thinking I might see someone I know in that live studio audience watching the show with ChrissyPoo. Night sweats.

Chris is back in Iowa walking through a snow covered corn field in $300 shoes. It's what farmers do. He's "dating" two "awesome" women and the decision he's making "could" change his life.

Chris meets up with his fam and he has an inordinate amount of nieces and nephews. Whitney is coming to the farm first and they make her walk the entire corn field before coming inside.

Whitney walks right in and says, "we made a baby!" Because that joke still kills.
(It doesn't. I'm lying.)

The family sits down to dinner and Whitney tells everyone she's been stalking Chris since she watched him on the show that one time. He is listening AND desperately trying to get something out of his teeth. He's also drinking whiskey out of a wine glass.

Sista1 asks Whitney if she could move to Iowa.

Whitney thinks the Sistas are "pulling" for her.

Now, the Sistas sit down with BrotherBear Chris and WHY DON'T ANY OF THEM LOOK ALIKE?

Sista2 asks, "what is the difference between the two women?"

Chris mumbles his way through an answer and says Becca will "charm" the pants off of you and stops in the middle of at least 6 sentences.

Whitney sits down with MamaBear and starts laying it on THICK.

"I lost my mom 10 years ago. I've been waiting to call someone 'mom'." -- Whitney
Hey. Can you just check yourself?

Does anybody know anyone who calls their in-laws 'mom' or 'dad'?
I think that's not a thing.
(Everyone imagine their BIL or SIL doing it...right?)

MamaBear is super impressed and couldn't ask for more. She does finally say, "It's not my decision to make."

Whitney has to leave, but before she does...

"DON'T YOU DARE FORGET HOW MUCH I LOVE YOU." -- Whitney
Translation: I will burn this mother down if you don't pick me.

Right now, I'm picturing the "Dateline" episode that could come of this.

Chris heads out to the toolshed (literally, tools everywhere) with his bros and dad to throw Becca under the bus.

How do these people listen to him?
He just stops talking in the middle of every other sentence he says.

Brother then describes Becca as "the girl at the bar no one can talk to," before Chris finally tells them they need to meet her first.

It feels like Whitney probably didn't go back to town and she's just hiding out in that barn for a few days. She's come this far and she's not going to lose him now.

Chris' family says it's hard to meet a second gUrl. THEY ARE SO OPEN-MINDED thinking about about much they like Whitney.

"Have you and Becca talked about Iowa?" -- MamaBear
Translation: has she come to the conclusion that you have no transferable skills and this is it?

Chris goes on the long walk to pick Becca up at the end of the driveway. She brought some treats. Probably all the way from San Diego because there are no bakeries in Iowa.

Is that a new Sista?

"I'm so glad he got to see where I came from." -- Becca
Translation: No one in Iowa believes that people live in Shreveport.

The fam sits down to dinner and Becca says "downtown" and the whole entire family shit their pants with laughter.

No one gets to finish eating before the Sistas drag Becca away.

That Sista3 with the Pink! haircut is over this.

Becca calls Whitney out by saying, "If I'm not totally there, but Whitney is ready to have babies, does that mean this has to end?" Then, she says, "long-distance."

Becca does says she's not moving until she's sure, no matter the location.
Sista1 is NOT accepting this answer.

"We've seen a California gUrl not want to come to Iowa before." -- Sista1
Just one?

Now, it's time for Chris to take the hot-seat with the Sistas.

Where do you think Sista1 got those ripped jeans? Homemade?

Sista1 is like, "you can't get into a long-distance relationship, you need to push her." I think she's thinking very LITERALLY, because there are no roads to even get to his house in Iowa.

MamaBear is trying to have an open-mind.

"I really didn't think anyone could compare to Whitney, but..." -- MamaBear

"You're someone special, but we also have logistics." -- MamaBear

MamaBear throws down the hammer and tells Becca she has two days to decide what is going to happen. Becca says she's not in love. She says her fear is that "Whitney is ready to move and have kids."

DID WHITNEY JUST SIT AROUND ALL SEASON AND ONLY SAY THAT?
Becca has said that just as much as Whitney.

Then, she starts telling Becca to "take chances."

This G don't even know-- Becca got ice in her veins.
ICE.

Becca is in the final two comin' to the family's house, walking through the damn snow and saying out loud, "I'm not in love yet."

All in all, Becca is saying, "I DID NOT LEAVE SHREVEPORT FOR THIS."

If a town isn't even an equal-lateral move from Shreveport (so like, Texarkana), the place must be bad.

Gary/Dad sits down and does this coy little interview and smirks at the camera the whole time and is all, "Tee hee, Chris wants Becca, but THAT WHITNEY AIN'T ABOUT TO GIVE UP NOW."

Chris heads to the "hotel." The nearest hotel is 74.3 miles away.

At this point, the most difficult conversation I have ever heard begins.

Chris: Focus. Focus. Focus. Can you be with me, in this place? What do you see in 5 years?
Becca: I feel all the emotions. I can't make any promises. I don't have a timeline.
Chris: No promises?
Becca: I don't know. My answers aren't clear.
Chris: No, that's not not clear.

Becca: I want a family.
Chris: Becca, you just telling me...
Becca: You said 5 YEARS!
Chris: WHAT DO YOU WANT?
Becca: I WANT TO GET MARRIED, I WANT TO HAVE KIDS, I DON'T KNOW WHEN I WANT THAT TO HAPPEN.

Ladies, is she the only honest woman in the entire world?
A man is sitting in front of her saying, "JUST SAY IT AND YOU GET A RING."

AND ALL SHE CAN SAY IS, "I LIKE YOU ENOUGH TO FLY BACK TO IOWA AT LEAST ONCE TO GIVE THIS A SHOT."

She's not budging. There are steps in her head.

"I guess, just figuring out when I get to Arlington what I would do there." -- Becca

Becca, do you mean-- WHAT THE HELL HAPPENS IF YOU MOVE TO IOWA AFTER DATING A GUY FOR 6 WEEKS AND YOU DON'T WANT TO MARRY HIM?

At the end of all of this, Chris says, "Those weren't the answers I was looking for, but it's still pretty awesome, because I want the same things as her."

In summation, closed-captioning nailed it. 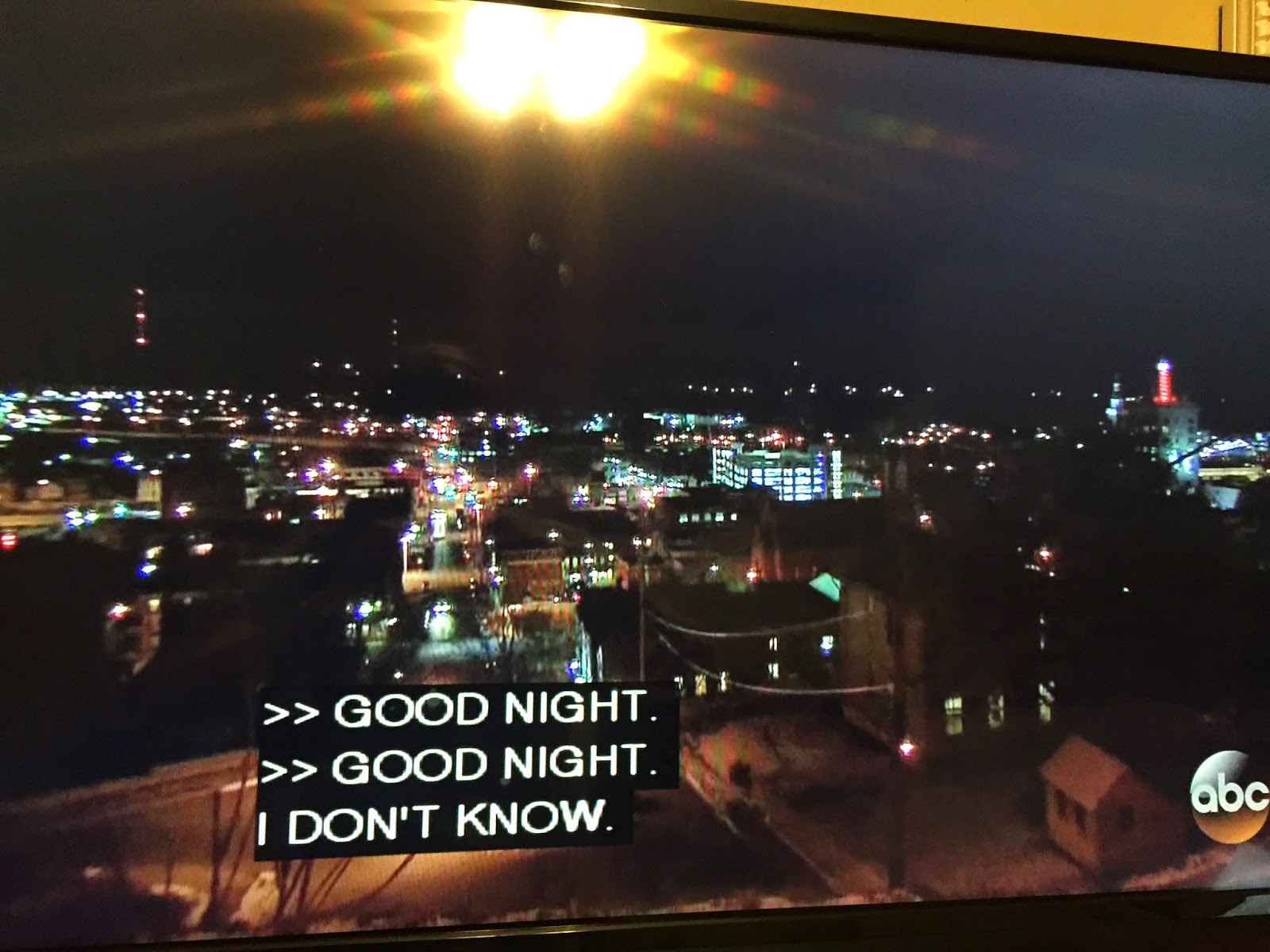 So, now, Chris gets another day with Whitney at his house? I am so confused.

Whitney says she can't believe she's at the end of this.

Chris decides to take Whitney to "harvest the corn."

Whitney thinks that seeing him on his farm is sealing the deal.
No, baby gUrl, this is your last chance to RUN.

Chris takes Whitney back to his house. He says it's not decorated because he was waiting on a wife to decorate it. I think it's because Pottery Barn doesn't deliver out there.

Why does he have a tile room like that?
Tile rooms are for the beach and should be smaller.

They cuddle up next to the fire in the middle of the day and Chris calls the week a "real experience."

I think he's saying, "so, during the day, I'll be on the tractor and you can just sit by the fire and drink wine anytime after lunch. Before lunch you can just wash some towels or read."

It's nighttime now and they are back at that hotel. Is Becca still there?

They walk into that hotel and she has a framed photo of the two of them next to the door. Chris likes it. She says she carries it everywhere.

Chris lives in such a small town, with so few people, he doesn't recognize what a stalker would look like or do.

"It is small. If you want to go to a different place where more people are, you just go there." -- Chris
How he feels about living in a small town.
That's perspective.

"I love being domestic." -- Whitney
This chick invented the damn game.

"There are some things that are unspoken, that I can't verbalize." -- Whitney
THAT IS A BOLD-FACE LIE.
This G has never met a word she didn't say out loud.

"I feel like when you say things, I can finish your sentence." -- Whitney
Because he's never finished a full sentence in his life.

Whitney talked and talked for about 19 minutes. She didn't really say anything with a lot of depth, she just said a lot. When she finally finished and Chris had a chance to get a word in...

"What you just said is something that I reciprocate." -- Chris
Shut this shit down.

Neil Lane has found a flight to Iowa and brings some rings for Chris to look at.
At this point, you have to admire Neil's commitment to being famous and making this happen.
I can't really remember, but I'm pretty sure they got Harry Winston the first few seasons.

Chris gets dressed and heads back to the farm.

I CANNOT EVEN DESCRIBE WHAT ABC DID TO THIS BARN.

The PA that got to decorate this barn was able to fulfill at least, AT LEAST, 200,000 Pinterest boards' dream of dreams.

If I didn't know better I would say Pinterest sponsored this whole evening.

HOW MANY NEW PINTEREST BOARDS WERE CREATED LAST NIGHT WHILE WATCHING THIS?

HOW MANY DUDES WITH BARNS WOKE UP WITH THEIR WIFE TALKING ABOUT "RE-DOING THE BARN"?

Chris launches into his spiel.

"You are going to be an incredible husband, you're an amazing person." -- Becca

Becca would rather move back to Shreveport and live with her parents than even attempt to live in Iowa.

No, Becca would rather move back to Shreveport and live with her parents than even pretend like she would want to live there.

No, Becca would rather do ANYTHING than even almost say she could move there.

As she is driving in, she's imagining burning the whole damn state down if she doesn't get a ring in the next 9 minutes.

She's picturing all the unicorns she's going to buy and put inside of that fence. Screw brown horses!

(TIME OUT. THAT IS A NEW FENCE. THERE'S NO WAY THAT IS A REAL FENCE THAT HAS ALWAYS BEEN THERE. RIGHT?) 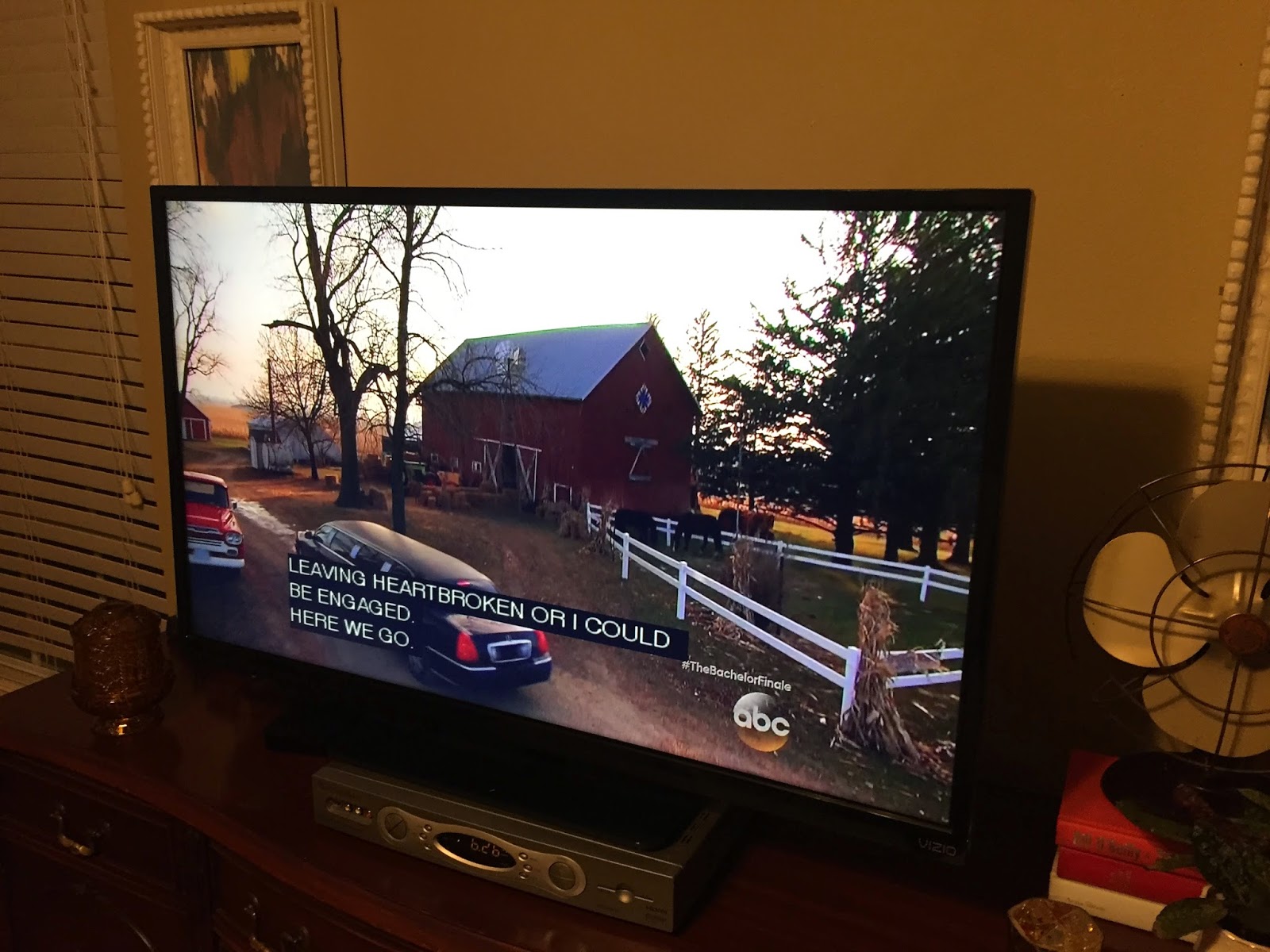 Whitney makes her way into that barn and I THOUGHT SHE WAS GOING TO PROPOSE.
ONCE AGAIN, SHE JUST COULDN'T DESCRIBE IT AND SO MANY THINGS ARE UNSPOKEN.

Seriously. It was 14 minutes before Chris got to say anything.

Anyway. He finally got to propose after saying "perfect" a whole bunch. And "amazing."

And the giggles. THE GIGGLES.

Then, they took a seat up in the barn's loft and looked out over the land.

I turned it off, because I DON'T KNOW.