I'm currently doing an in-depth study over the book of James. If you aren't familiar with the Bible or this book in particular a major theme James addresses is overcoming trials and facing trials and tribulations with a joyful attitude, in that trials bring us closer to the Lord and allow us to have a deeper understanding of the character of God.
If you've never endured a trial it's easy to say, "Oh, no problem, I can do that..." And if you have ever endured one it's almost surreal to look back and see how correct James is when he tells us that enduring trials will mature us and yes, give us a deeper, fuller understanding of the Lord and His plans.
So...tell me...what am I supposed to learn from this terrible time in my life when I thought it was acceptable to wear things like this outfit in public? 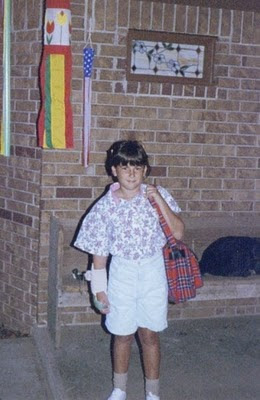 In an effort to be more transparent and real with you people of the internetS, it's time to get real today.
Every morning when I wake up I pray that I would be more like Jesus. I have recently expanded this prayer to include the words, "in all ways." I hadn't left them out previously on purpose, but I think it's important that in praying to be more like Jesus Christ, I do mean, really be like Jesus. In all ways.
As you can imagine this is a struggle for me, but in being true to his word, the Lord is working on me. Unfortunately, he seems to be taking a break on Saturday afternoons. Either that or the play of the Arkansas Razorbacks stifles the Holy Spirit in my body so much so that casual observers would believe that I'm a recently released felon or that I'm a mental patient. It's a toss-up really.
In weekends past I've threatened to set dogs on fire, burn down houses, become a baby mama to the Arkansas QB, break people's legs...and those are just the things I have said that don't have 19 different ways to use the words, "shit," "ass," or "bitches."
I'm not proud of this behavior. I'm actually embarrassed by it and I think I need help. Serious help. If I don't get it soon I really might become a felon or a mental patient.
Anyway. From now on, my morning prayer is going to be, "Lord, help me to be more like Jesus in all ways...especially during Razorback football games. Amen."
I'm not kidding.
Posted by lc at 10/18/2010 1 comment:

It's no secret that I love terrible television. I'll watch almost any reality television program short of "Big Brother" and most weight-loss shows. I also don't love the reality cooking competitions, but on occasion I can get behind them.
I digress.
A couple of weeks ago I received a g-chat, from a dear friend and loyal g-chatter, Corrie (SHOUT OUT). In a minor spat over "Jersey Shore" with her husband, she was forced to turn off the Shore and find respite in some other form of entertainment. She chose "Sister Wives" and immediately told me it's a "must see." I take few people at their word, like I do Corrie, so I followed up. And I can say-- best decision ever. And worst.
My eyes being opened up to these people (and really, not even talking about their "lifestyle" all that much) causes my whole body to shudder. And ache. And cringe.
Basically, it's like this: "Sister Wives" is the story of Kody Brown and his fundamental Mormon** family, that belongs to the Apostolic United Brethren Church. You still with me? If you don't know much about fundamentalist Mormons you may breeze over that and not realize that they practice POLYGAMY. For those of you keeping score, polygamy is a form of marriage in which one person has more than one spouse at a time. BOOM. **I should state for the record that the mainstream Mormon church gave up this practice in 1890.
So, Mr. Brown has three wives when the series begins and the season is focused on the addition of the fourth wife, Robyn. Robyn is undoubtedly a younger, hotter wife. She also brings two children along with her to add to the Brown brood of 13. The other wives are weird versions of Michelle Duggar (of the morally right, hairfully wrong Duggar clan), Sarah Palin, Donna Reed, Carol Brady and a possessed alien.
These women are absolutely insane and two of the three said that growing up they always figured they'd marry into a plural marriage. One wife even went as far as saying that she only wanted to be a third wife. Like, that was her end goal. I'm sorry, but W. T. F.
I really don't want to get into all of the reasons that these people are living life, more or less, incorrectly and focus on how this complete and total d-bag landed, not one, but four wives. A prime example of his being a total idiot is on display during this video below...it also provides a minor glimpse into drama between the wives...drama that all centers around one concept: everyone, at some point, feels neglected by Mr. Brown or jealous of another wife. Which, hello: THIS IS WHY YOU SHOULD NOT SHARE A HUSBAND. Like, get a clue. They spend the majority of episodes crying in form or another and it's really insane. You have to check this shit out for yourself.
Posted by lc at 10/18/2010 3 comments:

Two years ago I took a monumental step in my life and traveled out of the country for the first (and still only) time in my life. I ventured down south to Ecuador, a country that isn't usually for people who haven't traveled internationally before (according to one very-well traveled Canadian I met at a hostel, who said Paris and London are usually people's first adventures in foreign travel).
It was absolutely, without a doubt, the trip of a lifetime. A trip so full of memories that I created a coffee table photo book to prove just that. And. Two years later I'm still blogging about it.
The trip started off with a bang spending six hours alone in the Panama City, Panama airport, where people spoke almost no English. After finally arriving in Quito, my bestest, Britt (SHOUT OUT), informed me that I was not allowed to flush toilet paper down the toilet. Then, we made our way to an active volcano where some people got drunk and rode their bikes down it, but we just rode. And then, then, the hike from hell happened. I still can't talk about this day without cringing.
I think the once great band, Fall Out Boy, said it best when they said, "thnks fr th mmrs." So, Ecuado, thnks fr th mmrs.
Posted by lc at 10/08/2010 2 comments:

Yesterday a minor anniversary in my life was celebrated. The day marked the 27th year I had been free from the confines of my mother's womb and began the (hopefully) long journey to my impending death.
With each year that passes I become older (how's that for profound?) and somewhat more mature than the year before. And, with each year that passes I become more thankful for things that I probably never thought I'd be thankful for. And rather than focus on my impending death and the fact that I'm now closer to 30 than 20, I'm choosing to celebrate. Aren't we supposed to get older? What's the alternative to getting older? I can't say for certain, but then again, I can: it's death. Why do people get so upset about getting older? I've come to really enjoy the perks of being older. Especially the part that allows me to do whatever the hell I want, whenever the hell I want to do it. What's not to love about that?
To me, complaining about becoming older, is almost complaining about being alive. Which means, you're essentially complaining about breathing. Which is actually complaining that your brain is sending a signal to your lungs.
So, let's cut the BS. Let's celebrate the fact that, for the majority of us, we're all functional beings with the ability to grow older and wiser and ultimately, enjoy more of life and the things the Lord has given us in this life.
But, seriously.
Posted by lc at 10/06/2010 1 comment: