In a weird twist of fate I've managed to be out of high school for 10 years. I've been out of college for 6 years. So, if you do the math, I haven't had any formal education in quite a few semesters.

But, alas school goes on without me and according to my Facebook Newsfeed every single person I know has a child going back to school this week or is a teacher going back to school. I guess as long as the teachers don't start posting their feeding and sleeping schedules we'll all be all right.

To honor the long line of teachers I come from (seriously, a shit ton of people in my family have been teachers) here are some back-to-school photos compliments of lc of lcblogs.com. 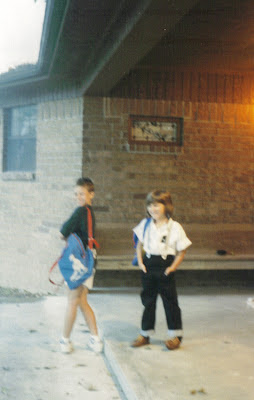 The Brosef got super sassy with his pose. Or. He was just showing off his really impressive dinosaur backpack. Knowing my brother it could go either way. He's very sassy and very showy. Honestly, it's likely that he was being sassy AND showing off the impressive dinosaur backpack that was probably special ordered from the back of a Highlights Magazine. He was in 3rd grade.

When you look at the casual-cool I am exuding in this photo you would have no idea I was about to enter into my FIRST DAY OF SCHOOL EVER. I was too cool to even look at the camera, but I knew my mom wanted a smile, so I looked off to the side just a smidge and gave her one. The hands in the pockets? Clearly, I'm saying, "Screw you, kindergarten!" The bag on one shoulder? It's like I had done it all before. There's not a hint of nervousness in me, save my left foot. The slight flex of the left foot is happening to let people know, "Hey, I'm 5. Stay cool."

I have to assume I picked out my own outfit. I wanted to portray casualness, but also that an effort was made and that I was very serious about my education. If you look at my brother's outfit you can tell he was not thinking the same thing. The suspenders and loafers really put this outfit over the top.

God love my mother for trying her damndest with me and my wardrobe growing up. 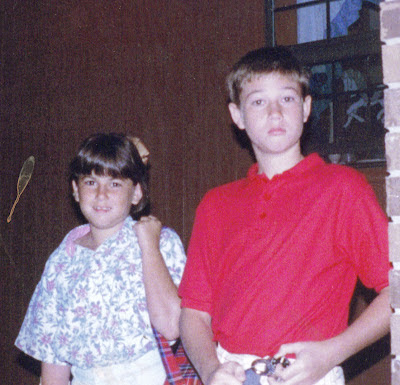 It was at this point that I decided to just be serious about my education and to not worry at all about my attire. The floral print shirt was chosen to let everyone know that I was thinking about becoming a Democrat and the plaid messenger bag was foreshadowing to my dreams of becoming an elitist East Coast academic.

I also wanted all the boyZ in my 3rd grade class to know that I was a lady and I was going to dress like one. The 13-inch inseam in my shorts was the perfect way to get that point across. I rarely advertise what isn't on the menu.

The outfit was completed by matching my brown socks perfectly to my brown bow.

My brosef is pictured in what would become his uniform for life: a polo shirt and khaki shorts. He opted not to smile because he was a 6th grade boy. 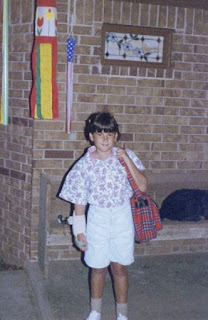 We're going to pretend like NBC isn't running most major events on tape delay for a few moments and dive (pun intended) right into the second biggest headache of the games of 30th Olympiad: the commentators.

Matt Lauer got us started off right during the Opening Ceremony when he said these two things:

"The queen, everyone knows she's got a wicked sense of humor."

What's with these guys? They stand unbelievably close together and offer almost no insight into the majority of what we see on our television screens. The only thing Rowdy ever talks about is underwater turns and strong finishes. I wish he would go under the water and stay there.

At one point, Rowdy told me to "watch the clock" during a race. Instead of the race? Or at the same time? Or what? Was the clock going to swim?


GYMNASTICS
I was never a gymnast on any level. Like, I can't even do a forward roll. And I've tried. However, I had enough friends compete to know what's going on.

The things that these people do with their bodies needs no commentary. The fact that they are flying through the air and twisting 17-26 times while wearing bedazzled eye shadow and enough hair clips to withstand Katrina speaks for itself. Just shut up and we'll watch.

But, NOOOOOOOOOOOOOOOO. They have to say audacious things like, "She's better than she deserves to be." I'm sorry?! How hard has this kid worked? I mean, I was a mediocre high school athlete and I worked hard to be mediocre. My parents watched thousands of dollars flow out of their bank account to support my mediocrity. And this gUrl, who is clearly more talented and more hard-working than I, is being told she doesn't deserve it? Absurd.

I just need someone to explain the damn scoring system to me at the beginning and then shut the hell up.

ARCHERY
At one point, the commentator told me that, Khatuna Lorig, competing in her 5th Olympics, never really felt comfortable with her sport until she trained the actors in "The Hunger Games" to shoot a bow and arrow.

That has to be a joke, right? If she was so ashamed, why wouldn't she just quit? I'm sure Katniss just really changed her life.

BASKETBALL
"Can we like Lebron James now?"
Yeah, don't get me started.


EQUESTRIAN
This is the event that really just sent me over my limit. Granted, I know nothing about horses, equestrians, dressage, saddles, spurs or hay-- but, these people still took it to another level of absurdity.

We aren't going to discuss this, but Adele was playing in the background of one of the rides. ADELE. Can you imagine any other sport blaring Adele while the event is happening? OH. Michael Buble just came on. This can't be real. If you can dance your first dance at a wedding to the same song you can be an Olympian to, I'm out. OUT.

Also, at no point did these people ever explain anything to me. THIS IS AMERICAN TV. Do you think we have any clue what is happening? Have you ever seen an equestrian rider on a Subway commercial? No. That's why we need some help. Just tell us what is happening.

Who's the athlete? The horse or the rider? Who gets the medal? Do they make horse medals?

"I wish he would tuck that tie in, it's so unprofessional. You'd never see an American looking like that."
Let's note that this man was commandeering a huge ass animal over obstacles when his tie slipped out of his jacket. What's more important-- his safety, the horse's safety OR his tie? Well, if you said safety, you're wrong. According to this lady his tie was most important.

Also, the Americans finished dead last in this particular competition, so who gives a rat's ass about what they look like. They probably look like losers with their ties all tucked in and a bunch of sorry scores on the scoreboard next to their names.

"French horses are so much lighter."
Great! Horses everywhere are going to be watching their weight now just to live up to the lighter French horses. Horse anorexia: look for it to be a big issue come the 2016 election.


"That's a rail."
This was said AS THE HORSE KNOCKED A RAIL OVER. Clearly, this lady thought a blind person was watching and could only hear that a rail was knocked over, so she needed to explain it.


"She has a sister named Linda."
With a back story like that, who wouldn't want to know more? Really? Either tell me that Linda is a paraplegic because she fell off a horse and now the sister rides for both of them OR leave Linda out of it.


"That was such a beautiful end to a beautiful ride, the picture would've been even prettier if she had tied her hair back."
ARE YOU KIDDING ME? I get it. This is a sport where people are wearing tuxedos and top hats. You need to look your best, BUT...they are on a damn horse. You could die while doing this or at least break your neck. Are we really concerned about hair?