the hills: new and not improved.

Damn it, this is America.
Go big or go to Canada.
Growing up I didn't dream of doing much with my life. At a very young age I wanted to be a doctor, I realized quickly math and science were a strong no-go for me, so I dropped that one before I left 1st grade. I then moved on to dreaming of being a soccer or basketball coach, but dropped that one when I realized I'd have to keep my bowl haircut for the better part of my life and I'd have to invest in way more track (wind) suits than I wanted to. So, I decided around 7th grade that I wanted to be in advertising, specifically, I wanted to write ad copy. Later, I realized I just wanted to be able to create on a daily basis. So, pretty much, I'm doing what I want with my life (most days).
I gave you that incredibly boring piece of my history for a reason. In America, kids are allowed to dream of being whatever they want when they grow up. In Russia and China, kids are lined up at the age of two and told their destiny. And then they start their training. I mean, the Reg spent a solid 18 years of my life convincing me I needed to be an engineer and with enough hard work he thought I could do it. Yeah right. I couldn't be an engineer any more than I could be a Chinese gymnast. But, I digress.
Kids dream big in America. That's what being an American is. Kids dream of being astronauts. Kids dream of being marine biologists (Side note: WTF? Why do so many kids think that's a logical goal for their lives?). Every kid in America thinks they can grow up to be whatever they want: President, astronaut, ad copywriter-- you name it, you can be it.
Well, not any more, kids. Let's get real: you can't be an astronaut because NASA is in jeopardy. You can't go to space because Obama is cutting the space shuttle program. Now, you can go read all about this subject and we can debate on and on and on because Obama says, he's "restructuring" NASA, but I don't care.
This is America. We HAVE to be doing shit other countries can't do or won't do. Admittedly, I don't give two rats asses about the moon, space, rockets or space shuttles...but, I do care about being awesome. I do care about living in America and the meaning behind living in America: we're better than you at exploring space, basketball, creating awesomely stupid talent shows for television and holding elections.
If I wanted to grow up and dream of being something logical and realistic I'd move to Canada, where things are good, but not awesome.
This is America.
This is the country where washed-up boy band members can go to space.
Let's keep it that way, please.
Posted by lc at 4/15/2010 3 comments:

what's in a name.

I just read an interesting article in the New York Times (my level of sophistication, surprises you, eh?) about naming your baby and then regretting the name you gave said child. I was surprised to find that only three percent of people surveyed said that they, in fact, regretted the name they gave their child. Something in me is guessing that they only surveyed people who named their child something normal and civil.
Because, surely, some of these crazy-ass-people (CAP) who name their children after a fruit, a car, a motorcycle or a beer are feeling a little uneasy about the decision. And surely, the people who give their kid a functionally normal name and then trick it out with some weird-ass-spelling (WAS) regret it when they are constantly yelling, "Mad-a-line! M-A-D-D-Y-L-Y-N-N-E-E! Just like it sounds!" I'm sorry, that's not just like it sounds. What's with all the extra letters? And why are people suddenly changing the spelling of names so their kid is "different." Just because your kid spells their name Ashleee instead of Ashley doesn't make them different. It makes them difficult. I also think it sets them up for a life of being high-maintenance.
I've never named anything more than a few dogs and a couple of fish, but I never named them anything I regretted. I do wish I would've ventured out a little more when naming my teddy bear, Teddy, but that was actually a pretty original name.
When my parents were debating on what to name me they both wanted some glory (I think they knew how awesome I would turn out) and wanted me to be their namesake. My father wanted Regina (oh, Lawd, what if?) and my mother wanted Lauren. Praise God my mother's ego was bigger and they went with Lauren. In a not-so-awesome move they gave me the middle name Nicole and decided I would go by Nikki, as to not confuse the public (Lauren and Laurie sound alike when you mumble). I'm a firm believer that any name that features not one, but two K's and ends with an I is a recipe for disaster. In a move to make my life easier, better and a lot less trashy, my father decided just a few days into me being out of the womb that Nikki simply wasn't going to cut it. He knew I would dream of being a United States Senator and author. He knew I wanted respect and admiration. And he knew a person with that name would never get it.
By dropping the two K's and an I shit-storm my parents set me up for success. I just wish the rest of the world would do that when they name their children. I mean, seriously...are you ever going to vote for someone who's name is Madisyn? or Kaedence? What about Abdulkareem?
Think before you drink. And don't drink before you name your baby.
Posted by lc at 4/09/2010 5 comments:

Well, yesterday marked 318 months for this little lady! Not only am I walking and talking just as great as ever, but I'm eating solids and drinking alcohol! I couldn't be more happy with myself at 318 months and it's safe to say the joy I am bringing to people through my karaoke skills, dance performances and word-smithing is matchless. 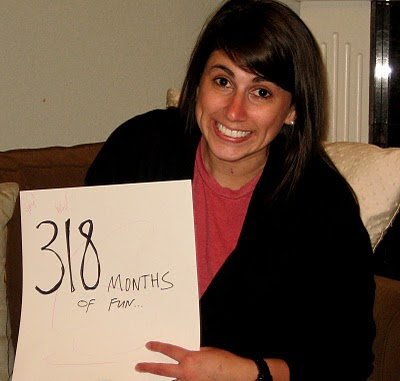 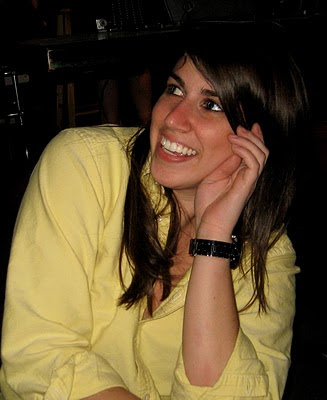 I'm most excited about: Vampire Weekend concert this weekend, getting my hair cut, having a stove in my apartment in about a month, being able to do laundry at my leisure in about a month and pool-time weather!
My favorite words: shit, ass, asshole, bitches, cheers, no.
Thanks for checking in! I know I'm awesome and I know there's a lot more fun ahead of me in this life! I can't wait to watch myself grow!
Posted by lc at 4/06/2010 7 comments: