My senior year in college I had the extreme fortune of leading six freshman gUrls in a Bible study. If I'm being honest, I agreed to do it because it gave me the opportunity to hang out with a bunch of freshmen and not look like a creepy senior. This Bible study was made up almost entirely of fellowshipping. Over the course of the year, one of the gUrls, probably the most precious one of the bunch, began to date the up-and-coming Ben Rector. He was a musician and I was leery that he would take precious gUrl Hillary for a terrible ride, but...the exact opposite happened and he actually married her and in turn, made me a huge fan of not only his music, but his hair, too.
Over the years I've learned that Mr. Rector, the musical genius that he is, also has quite a sense of humor and a deep and abiding love for The Bachelor. Hillary (SHOUT OUT, MRS. RECTOR) always tells me things he says while watching the show and I had to give him the opportunity to share his thoughts and finale predictions with the world (or the 12 people who read this). ENJOY.
Side note: If his music randomly pops up on my iTunes over the course of my day, I rarely change it. So, I feel like I should give him at least a little PR. He didn't ask me to do this at all. Check out his tunes here: Ben Rector Music.
I'm a fan of the Bachelor. I won't shy away from that fact, I won't even call it a guilty pleasure. I'll just say I'm a fan. I'm not one of those "I just watch it because my wife/girlfriend does it but I don't even like it" fans either. No, I started watching it on purpose and sucked Hillary in because I talked about it so much. If it's Monday and I'm home, I can guarantee I'm in front of my TV having a grand time watching and making fun of the Bachelor. So, when LC asked me to come out of the "bachelor loving closet" (a direct quote) and give my thoughts an audience, I agreed.

Let's be honest folks. The Bachelor is not about normal people finding a mate. This show is about people who want to be on TV almost never finding a mate. If you have any doubt about that statement, I made this chart for you. 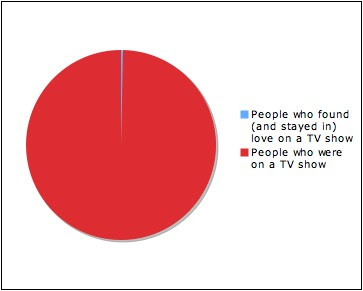 So, before we go any further, we need to agree on that. The thought that thirty relatively successful, young, intelligent, very attractive women are unable to find someone to be with is a little bit foreign to me. If they asked me (and they didn't) to give husband finding advice to this group, I would say this:

That's it. No steps, no formula, nothing. If you possess the aforementioned qualities and remain alive, I can almost guarantee you will find men that want to marry you. You certainly don't need to come on a show that has a shockingly poor track record of creating lasting relationships to find love. I'm not saying that the show can't really work, I'm just saying that it doesn't really work. So if you're really looking for love, you should probably look elsewhere. But if you're looking for the chance to be filmed flying around the world to extravagant dates that are almost guaranteed to include a helicopter, you are in the right place.

I often find myself thinking about what must go on behind the scenes to create the situations that occur on the show. The date selection this season was laughable. I imagined the interview process...

Producer-"Emily, tell us about your last relationship."
Emily-"Well, I was in love with a race car driver who died in a private plane crash."
Producer-"Okay, great. We'll put you down for the racetrack group date and the private plane one on one."

What's that Chantal, your greatest fear is open water? Bet you'd love the walk on the ocean floor date!!! And Michelle, deathly afraid of heights? We'll help you find romance by dangling you off a building! I suppose some of that is necessary for "good" TV, but part of me would love to see the show with a few less set ups. It might not be as outrageous, but I'd like to believe we could find a happy medium. However, I also understand they've created something that you and I are both kind of invested in, that I am up late typing (you are currently reading) about, and that that is no small feat.

My prediction for the finale?

1. I think Brad will continue to speak like a camp counselor and will also continue saying things twice in a row.

"I am so excited for the western party tonight. I am SO excited."

2. I think we will hear the phrases "two incredible women" and "biggest day/decision of my life" thirty times.

3. I think Chris Harrison will continue having the easiest job in the world.

4. I think Brad will forgo the obvious choice (proposing to the lovely and quite normal Emily) and instead propose to Chantal. He'll cite Emily not being over Ricky Bobby and not being ready to make this kind of commitment as reasons, and I think she will handle it gracefully and continue being way too good for the show. I hope I'm wrong about this though.

5. I think Brad and Chantal will live happily ever after and in nine months be separated.

Thanks, ABC for a truly entertaining season. Thanks LC for letting me guest blog and for literally bringing my wife to tears every time we read your blog. I giggle. No tears.
Posted by lc at 3/14/2011

hahaha!! SUCH a great post! Ben, I will be watching tonight's finale with your lovely wife...wish you were here. And, LC, you have NO idea how much I wish you were here!! Will y'all both drive to Fayetteville and join us please?? My husband and I look forward to your bachelor recaps every week, and read them with tears and giggles as well...makes me kinda sad that it's the last night. Go Team Emily!!!! (although, Ben, I think your prediction may be true.)