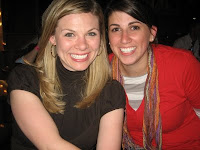 If you know me at all, you probably know that I have an incredibly unattractive habit of picking favorites among my friends and really, people in general.

That being said, one of my all-time favorites recently got a new gig at KATV in Little Rock. Basically, she has her own reality television show, which you guessed it, bumps her up even higher on my favorites list. If you've ever wanted to play a deciding factor in what goes on the news you should really check out her reality show.

Deano is either going to be the next Katie Couric or Caroline Kennedy. But, until I am officially able to ride her coattails into stardom I'll continue to cheer her on in her newest Mary Tyler Moore-esque endeavor.

On another note, but completely relevant-- the digital revolution is upon us. Because Deano cares so much about others (heart of gold) she made a video of how to hook up a new digital converter box. I have tried unsuccessfully to embed the video here. So... check it here.
Posted by lc at 1/16/2009

maybe if you hadn't made fun of geeks in your last post one could have helped you embed the video without 5 unsuccessful tries on your own.

and i'm still mad that poll was rigged.