This is the first in a series of posts about events in my life that made me who I am today. 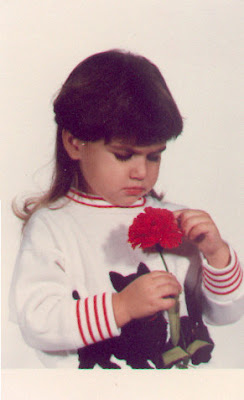 I was about four and we were spending what I believe to be a long weekend in the metropolis of Mineral Springs, Arkansas (don't knock it 'til you've tried it).

Weekends in Mineral (the shortened name for those who are not familiar with Howard County slang) consisted of splitting time between Tollette, with my mother's family and time in MS (more HoCo slang) with my father's family.

Time in MS meant time with my brother and three other cousins who were our age and trips to the pasture with my Papa Saul to look at the cows (he took us there individually to introduce each of us to the bull he named after us, turns out, it was the same bull and we each thought he was ours).

Time in Tollette consisted of tractor rides, running from the dogs that scared the pee out of me, watching tv with my Buddy (more slang for "great grandpa"), washing the dishes (I loved it?) and of course, occasional trips to Miss Vivian's. Miss Vivian cut and styled hair. Miss Vivian was a friend of my grandmother and the mother to one of my biological mother's high school BFFs. So, apparently she was like family.

When someone like that is close to your family, you typically value their opinion. But, why in the world would my mother and grandmother let her do that to my hair? WHY, GOD, WHY?! Surely, she didn't say, "ok, I have an idea. Don't look." No, this had to be discussed.

I vividly remember, like it was just last week, coming home from Miss Vivians, climbing onto the stool painted like a tractor in my grandmother's bathroom and exclaiming, "It's so short in the front and long in the back!"

But, I do know that that haircut, that weekend in Howard County changed my life forever and in a way I am forever grateful for that awful mullet, because whenever people are having a bad hair day, I can relate to them and say, "you know, once, in 1987 I had a couple of bad hair days...in the form of a mullet."
Posted by lc at 9/18/2008

yes but at least they gave you the most classy flower, the the carnation, to hold

i had no idea! thats incredible!

you make me laugh. a lot.

I've heard a pair of scissors and Sarah (Palin?) was involved before it got to the Ms. Vivian stage.