Emily’s back and the only thing keeping me here this week is the promise of a Dolly Parton appearance.

We open up with Emily’s mom bringing her breakfast in bed. Lil’ Ricki is standing outside the door doing what looks to be a shitty version of a rhythmic gymnastics routine. Then, Emily claims (about Ricki), "she's having fun, I think." I don't know if she's referring to the routine happening outside of her door or the overall experience. I think she's wrong on both accounts.
We find out that Chris gets the one-on-one date. Chris is “grateful.” Do you think he knows what that word means?
Emily is laying it on thick at the beginning of the date. Say what you will (and I will), but baby gUrl got some game. And she spits it.
“I’m nervous, cause you’re so cute!” --Emily, to Chris
I feel like “so cute” is a little much at this point.
In a really silly turn of events Emily tells Chris he has to climb up a building and work for his dinner. He compares it to love. Typical. No one on this show has ever made that parallel before. Climbing a wall is like love. Talk about eye-opening!
It starts thundering while they are climbing up the building and a random observer yelled, “We love you, Emily!” The fact that she said, “we” leads me to believe she was speaking for more than herself, but that seems a little bold. Speak for yourself, random observer!
They make it up the building and it wasn't a big deal at all. They start dinner and have a weird convo about being in bars and approaching each other. I wouldn't approach either one of them in a bar. I'm actually going to say the chances of me ever even being in the same bar as either one of them is very slim.

Emily freaks her own freak when she realizes Chris is “only” 25. I knew he was 25 and I don’t even pay attention most of the time.
Chris gets the rose!!!!!!!!!!!!!!!!!!
He’s speechless. I wish all of these people were speechless.
She takes him to a concert in the middle of a street. Something was going BOOM BOOM and Emily looked really bored while dancing. But, then they started kissing and she grabbed his ass. I have to think she was no longer bored.

"I'm a little drunk on you and high on summertime." -- Country song lyrics
----
We are headed to the park where some of the boyZ  are meeting up with Em. In a surprise twist she brought some frands!!!! Her frands are going to ask the boyZ some crazy hard questions and see who is right for Emily and who isn't!!!!!!

“She left all of us playing sports.” --Wolf, as Emily went to find her frands
That is a sentence my frands say when making fun of people who are interested in sports.
I’ve never seen shorts shorter than the shorts Emily has on.

What's most interesting about Emily's frands is that they are all at least 10 years older AND are totally drinking wine out of of those styrofoam coffee cups in the park. Can't fool me.

Everyone is freaking out and being way dramatic about meeting the boyZ.
In turn, the boyZ are being even more dramatic. We have cuss words, cargo shorts and the phrase "train wreck."

"If this all works out these would become your frands, too." --Emily, to the boyZ
NOW, there's a deal!

We start off with Tony and the gUrls ask him what he has in common with Emily. He answers with, "Just taking my son to school and taking him to activities." I have to believe he didn't hear the question.  They don't have that in common because Emily has never taken Tony's son to school.

In the beginning everyone loves the question, "So, are you ready to be a dad?" Some of their answers were vague and some seemed sincere. I can't fault them. I don't know how I'd answer that question either. I mean, I'm probably not ready to be a dad either.

We get a fun little montage of people dancing and I had no idea you could move in cargo shorts the way some of these fellas are moving. One guy, I think Tony, had on cargo shorts and a wife beater. Re-read that sentence. CARGO SHORTS AND A WIFE BEATER. Is he going to the river to play basketball or is he on a date, meeting his girlfriend's frands?

Sean sits down and he mentions for the first time on the night that his dad is perfect and in turn, he's ready to be a perfect/great dad.

Out of nowhere about 27 kids come rolling into the park and I have to ask, "WHAT?"

Who are these kids? Where are their parents? This doesn't seem safe.

I just let my kid go on a reality tv show to play with a bunch of dudes in a park. SAFE.

David leaves the kids to talk to Emily and her frands. He tells Emily she can't get fat. He phrases it almost exactly like that.

What are the odds of her getting fat soon?

Sean sits down with Emily and tells her he's not ready to settle AND that his dad is perfect, so he'll be perfect, too. That's usually how that works.

"There's a lot more to me than just being a mom." --Emily, to Doug
FORESHADOWING.

Doug tells his story and it's a pretty sad story. I mean, he referred to his mom as, "some lady." That's sad. But, Emily starts crying so he quits telling the story. I have no idea how it turned out!!!! Like, what happened in the last 20 years, Doug?!?!?!?!

The Tony story line has to be mentioned, but it's kind of lame to me. He misses his son, he calls his son, he cries, he cries to Emily, he goes home.

Then, they all toast some white zinfandel.
WHAT A FUN PARTY.

It's time for Ari's one-on-one date. They head to DOLLYWOOD.

DOLLYWOOD.
I'm so into Dollywood.

They have a really sweet day and Ari seems genuinely confused about the fact that Dolly Parton has a theme park.

The two head into the concert hall and then, it happens. The curtain is pulled back and there she is!!!!! DOLLY PARTON is on my tv!!!!!!!!!

For the next 5 minutes I take back all of the things I've thought about Emily because she was genuinely excited. She was so surprised and overwhelmed. I loved every second of it.

I also love Dolly Parton more than I should.
I may or may not be a member of her fan club.
Like, sometimes I get e-mails from, "Dolly Parton."
Kind of like how Barack Obama e-mails people.

Dolly finishes up her jam session and wants to have a little talk with Emily. She encourages her and says nice things, then she sings another little diddy. I'd be shocked if we don't hear more of this song over the rest of the season.

It's finally dinner time and Ari launches into a story about dating a gUrl with two kids. He says he misses the kids more than her. He also took the kids to school a lot. OH YEAH. THEY LIVED TOGETHER. Hey ex-gUrlfriend of Ari, WHAT?

Emily picks up the rose and tricks Ari into thinking she wasn't going to give him the rose!!!!!!!!!! Fooled me. PSYCH. Oh, bless her heart for trying to be silly. The producers probably made her do that. And it was a struggle. For all of us involved.

Ricki picks out perfume for Emily to wear. She chooses the one that, "smells like Mindy's house." I hope I never go to Mindy's house.

She begins the party by talking to Kalon. Kalon looks way overdone tonight-- glasses, pocket square, slicked back hair, socks without loafers. He's pulling out all of the stops for her.

Kalon says some weird stuff about bringing Ricki into his life.

"It's not how I wrote it up in my journal as a kid." -- Kalon, about having kids
YOU HAD A JOURNAL AS A KID AND WROTE ABOUT THAT?

Emily handled that well, but you could tell she wanted slap that bitch in the face.

That guy took that egg outside and Emily threw it all of two feet and it broke. I'm still not understanding what that thing was all about, but whatever. It even had a name? I was really into the guys "pouring one out" for the egg. The egg named Shelly.

So, Alessandro. Where to start?

Let's start with his face and hair. He spends some time tanning. I mean, he has to. I know he's Brazilian, but he currently resides in Minnesota and they started filming in early spring. And his hair? Look at this shit show mop on his head. Listen, I grew up in a small town in Arkansas and I didn't know one dude with hair that bad. It's real bad. He's an adult! With a job! He has to work as a male stripper. That's all that makes sense at this point. The hair and the tanning? Has to be one, right? Has to be. 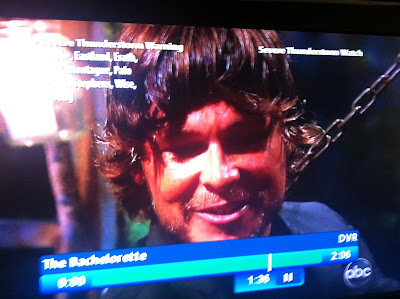 I do need to say: Emily is a bit of an interrupter. I noticed it last week and I'm noticing it again tonight. Maybe Kalon was on to something.

Back to the matter at hand. THE WORD 'COMPROMISE'.

This whole thing was weird. He said becoming a husband and a father was a compromise. And Emily tried to give him the benefit of the doubt and even looked into it being a language barrier thing, but he just kept on saying compromise. Then, he got crazy eyes. 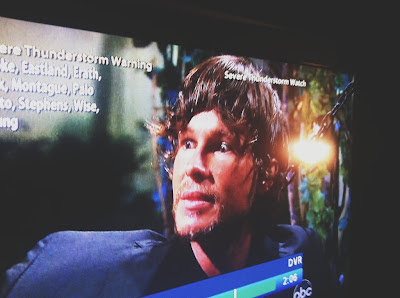 Look at those eyes. This is NOT someone you want to be making any compromises with, especially if children are involved.

He was so confused as to why she was offended. DUDE. You told her you were willing to "compromise" your male stripper lifestyle to help her raise her daughter and be the "chief" of the family. I WAS OFFENDED. And I don't even care!

She escorted him out immediately.
The Gypsy King has left the building.

Ari came to her rescue and eventually they made out. Other boyZ saw them make out.

Then, Sean told Emily, AGAIN, that he's ready to be the perfect dad. PERFECT.
Like, way to have realistic expectations.

I think, hands down, I have the most wonderful dad in the world. He's my best friend and I'm so thankful for him. BUT. Sorry, Dad, you aren't perfect. PERFECT?! Surely this was a language barrier thing and he doesn't actually know what that word means?

Kalon gets a rose and the guy that I have never seen before gets a rose over the Beat Boy. You know why? The Beat Boy had on plaid cargo shorts and a sleeveless t-shirt at the park. That's just not going to cut it, Beat Boy. No way. He also has facial hair that couldn't live up to most youth ministers' idea of good facial hair.

Ryan got weird and it looked like his v-neck shirt was shrinking before our eyes. Looks like ole boy is going to go all Hulk on these people soon.

It's really such a compromise for me to watch this every week. Oy vey.

You give the greatest Bachelorette recap. I love it!