Months ago, I said I was going to profile a few of my friends. I am continuing that trend today.

Years and years ago I worked at a little camp called Kanakuk. It was in Lampe, Missouri over the course of three summers that I made life-long friendships and learned how to used an industrial dishwasher. It was there that I made some of the most wonderful of friends and there that I met two lil' freak shows who make me better, almost daily.

In 2004 I was the counselor in ole cabin number 14. I had some great kids. Kids, who on a daily basis, almost hourly if I recall correctly, liked to say, "Gah, you're such a loser." or, "LC, why are you such a loser?" I loved those little punks like they were stray dogs abandoned on my doorstep, but for some reason unbeknownst to me I drifted down the way a bit to another cabin where the girls were dropping it like it was hot to David Crowder music. Clearly, they needed me.

I met one of the gutter-punks during a class and the other thought she was important enough to introduce herself to me. And boy am I glad that I didn't drown one of them down at the dock or ignore the handshake offered to me by the well-known, important kid.

Since meeting Staley and Barnes (SHOUT OUT) they have become not only two of my closest friends, but they've also become a vital part of my sounding board, huge blog fans, Longhorns, savvy dressers, excellent jet-ski drivers, proficient in Spanish, responsible adults who don't sell drugs or drink punch out of trash cans and most importantly...they've grown into two of the most confident and respected of 20-year-olds because of their pure hearts and desire to know Christ and make Him known. 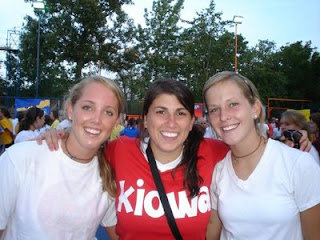 Freaks on a leash and me at Kanakuk, probably right before I said something really profound and they made fun of me.

Just go caught up....and laughed OUT LOUD about Britney Spears night!!! I would have gone with you.