Yesterday via Twitter, I posted this status/photo. I didn't think much of it and went on about my life and my all caps rant about Rand Paul's filibuster. Pretty normal day.

However, as the day winded down the photo was picking up steam and receiving a lot of attention/flack. I'd like to take this time to answer a few questions I received about the photo. 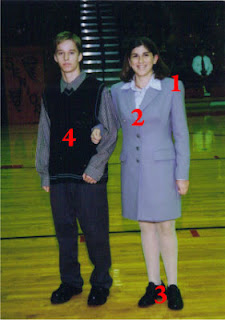 First off, the basics: This was taken in the year 2000 (10th grade) at Russellville High School's Colors Day (basketball homecoming) assembly. Every gUrl on the basketball team gets trotted out onto the court like a show dog in front of the entire school. This wouldn't be a problem, except we're talking about the gUrl's basketball team.

The team makes its entrance before the actual Colors Day court. So, it's like: here are some gUrls, here are some really pretty gUrls. Pretty standard for high school.

Also, at both RHS Homecoming and RHS Colors Day it's customary for members of the court to wear suits. Yes, we kept it very business casual in our teens.

1. To my knowledge those are not my actual shoulders. I do believe they were built-in shoulder pads.

2. That's a long jacket. I had a skirt on underneath the jacket.

3. NO, I did not steal those shoes from a Pilgrim. And yes, I think they look fabulous with the white-ish tights (actually those are totally control-top pantyhose).

4. Thatz just a boy named Josh. He was on the boyZ basketball team. I remember he asked me what color my suit was, so he could wear a coordinating shirt. It also looks like we may have been wearing the same shoes.

This is TOO good.

I ONLY love this picture. LC you kill me. Also, if you ever have a need for a business suit, I think you should pull this one out of the closet.

I'm just reading this one and it's hilarious!