I'd like to dedicate this post to my dear friend and Bachelor super-fan, Miss Brenda Marr. She celebrated her birthday by watching two hours of this bullshit with her 26 closest "ladies."

Brenda always gets a rose in my book.

After a 27-minute preview, where it's very unclear if someone is murdered or not murdered, we're promised the most exciting season of the Bachelor ever. Sean does some sprints in his BachPad side yard and has a FaceTime sesh with his sister, all shirtless, while doing a voice over explaining his "feelings feeling more real."

Sean talks and talks about his great life, but does so while sad (SAD ASS) music is playing. It makes it seem like him hanging out with his family and his niece and nephew is actually the life of one of those dogs on an ASPCA commercial. His life is almost identical to my life-- single, with friends and family to boot, and sometimes the 5th wheel at events. THE TORTURE!!!!!!!!!!! The pain!!!!!!!!!!!!!!

-----
Ari shows up to the BachPad and they pour two cold domestics-- COLORADO KOOL-AID. Tap the rockies, dudes!!!!!! If that was honestly their beer of choice, kudos. But, also: WHY.

This whole segment was pretty silly (SOOOOOOO SILLY) and was Ari's gateway back into the spotlight. He did some coaching, they did some gigglin'.

-----
Herrrrrrrrrre's Chrissy Poo. He starts off by wishing me (and a bunch of other white ladies, I'm guessing) a "Happy New Year, everybody!" What a lil' sweetie. His tie color is IDENTICAL to his suit. Right?

"Some people can live without love and be fine for their whole life, but I'm the opposite." -- Tierra
I think that that statement offends me.

Upon Tierra finding out the Bachelor is Sean, she screams, "HE IS FAMILY-ORIENTED!!!!!!" Like every man she's ever met has shunned families and declared himself NOT family-oriented. Who has she been trying to date?

We meet a one-armed graphic designer from LA. She seems sweet and I should note that none of my observations have anything to do with her lack of an arm.

Her goal for her most recent print campaign is to "stand out in culture." Oy vey. I don't think she's a real designer.

Ashley's still single, actively searching for a boyfriend and is STILL single. Could be because of her creepy obsession with "50 Shades of Grey." I'm not saying. I'm just saying.

Next up, we meet Lesley. She's from Arkansas and the fact that she states it straight out of the gate made my eyes well up with tears. If she does anything to embarrass me or my place of origin anymore than I've already been embarrassed by my football team this year I'll probably need to be institutionalized. Dramatic.

Kristy is a model and "it's just crazy." Mostly, her hair is crazy.

And here comes AshLee, the professional organizer. Listen, sad story, yes. Hate that she had to grow up like that. BUT, WHO IN THE HELL SPELLED HER NAME LIKE THAT? I DON'T THINK IT'S EVEN LEGAL.

This gUrl must be pretty driven because anyone who can take a compulsive disorder and turn it into a career is determined! Like, is there a way I could take my compulsive disorder to arrive everywhere minutes and minutes early (at the sake of many relationships) and get paid for it? Is that just a taxi driver? Or more of everyone's least favorite friend to travel with? Whatever. Call me LauRen.

AshLee is the first one out and she says to Sean, "Don't be nervous,  you'll do great." Like, great at what? Standing there? Smiling?

Jackie puts a scary amount of red lipstick on Sean's cheek and Selma removes it quickly. I'm assuming Jackie discussed her plan in the limo and Selma mischievously stuffed that kleenex into her dress and thought, "BINGO!"

Kelly, the cruise ship entertainer, from Nashville, wrote Sean a song and she sang it to him. : (

Ashley asks Sean if he's read any good books lately. Sean says he has, but then never mentions any of the titles. So. I don't know if he's actually read any books or not. But, to be fair, I think he was really distracted by the sex toy/tie ole gUrl pulled out of her bosom.

Taryn is up next and she starts the onslaught of gUrls who forget to tell Sean their names. : (
I forget to tell people a lot of things when I first meet them.
My name is never one of them.

REAL QUESTION: DOES SEARS SELL ADULT PROM DRESSES?
ARE THEY UNDER THE CATEGORY 'ADULT PROM' OR SOMETHING MORE SIMPLE LIKE, 'CRUISE SHIP READY-WEAR'?

Poor precious Robyn, the oilfield account manager, desperate to escape the dregs of the engineering dating scene, pulls off the world's worst version of Gabby Douglas (other than if I tried this feat) and falls after her second back bend? Flip? Cartwheel? Double-axle? Sean looks mortified and giggles.

Tierra arrives and I missed something. She gives him a really long hug and tells him about a heart tattoo on her finger before he leaves to get a rose. I went back and watched this scene thrice. Still, no idea what happened. He was just super into that tattoo that looked a lot like Jane Seymour's jewelry design she's always schlepping on ESPN during football games.

"She had this energy about her that was contagious and you can't really put your finger on why..." -- Sean, about Tierra, the gUrl with the tattoo on her FINGER
Oh, internetS, please tell me he just absolutely NAILED that joke and said it on purpose.

Tierra takes the rose and marches into the Lion's Den. Seriously. Book of Daniel up on my TV right now!

Amanda rolls in and has an awkward moment with Sean.

Keriann says she drove 2,775 miles to meet Sean. I'm calling bullshit on that one. Surely ABC pays for these people's flights?!

Lesley brings a football and says, "Blue 32!" over and over again.

The model arrives and her hair is CRAY. She delivers two very canned lines.

Then, that gUrl shows up in a wedding dress and kisses Sean. How does this happen? Do you just go to David's Bridal on a Saturday and when they start asking a lot of questions about the wedding details you just lie or tell the truth and look like a total psycho? If you're catching what I'm throwing, she kind of seems psycho either way.

KACIE B. IS BACK!!!!!!!!!!!!!!!!!
Poor thing. I just don't understand this gUrl.
She seems real sweet and nice and most importantly, like she grew up in a stable, loving home, BUT THIS? THIS? She ASKS to go on this show again?

I'm officially putting out an APB for all of this gUrl's friends. Like, step up! Stop her from doing this.

"As crazy as it sounds, I would love to find my wife in this group of ladies." -- Sean
YES, it sounds crazy.
First off, yet another man who doesn't know the definition of the word "lady" and second, IT'S A TELEVISION SHOW.

So. Kacie B. has a crush on Sean. That's why she uprooted her life again. For a crush.

-----
gUrls are getting roses and other gUrls keep repeating, "I have no idea what's going on." Like, WELCOME TO MONDAY NIGHTS IN AMERICA.

The gUrls with the roses start dissecting why each of them got a rose. To say it's catty would be the understatement of the Millennium.

Finally, we learn that Sean is handing out roses to gUrls with "great energy."

"Honestly, I wish I was more sober." -- Lindsay, the idiot in the wedding dress
Too easy.

The party is dying inside.

Not skipping even half a beat, Ashley asks, "Do we need me to start dancing?"
In my opinion, anytime this question is asked, by anyone, the answer is ALWAYS (ALWAYS), "YES!"

Unfortunately, no one answered her and she still did it. Not a win.

Finally, she gets her moment with Sean. She pulls the tie from her dress and Sean says he brought a rape whistle with him. Not to be an ass, but I don't think dudes should make rape jokes. On any level. JUST SAYING!!!!!!

Then, poor ole gUrl fell down the stair. Not stairS. Stair. She fell down ONE stair.

I feel bad about Sarah's speech and her one arm. She says she strong and confident, but has convinced herself that she's still single because she lacks an arm. gUrl, COME. ON. I don't think she really believes that. I mean, she's pretty, she has great hair and make-up (as in, I have two arms and can't do my hair or make-up well), and she's not wearing a floor length dress like she's going to a junior high dance in South Dakota. She has long adjusted to her situation. I'm calling her SOUL SURFER from here on out.

I have no idea what it's like to live with a disability in any way. But, I am 29 and single and I could go on and on and on about "why I'm still single." I guarantee you I am not single for any of the reasons I think I am single. Just like this gUrl.

Also, her disability (even though she doesn't like to call it that) does not mean she gets to be spared from my commentary. I did not ask her to come on the show and be subject to my wrath. She volunteered.

"Sean is the most sincere bachelor we've ever had on this show." -- Chrissy Poo
OH. IF THAT'S NOT A SLAP IN THE FACE TO THE LAST 12 YEARS OF OUR LIVES.

SORRY, EVERY OTHER JACKASS WE'VE EVER CLAIMED WAS GREAT ENOUGH TO FILM A SEASON AROUND.

"Twelve of you have roses, nothing to worry about." -- Chrissy Poo
Too bad you other bitches have to endure the tragedy that is this rose ceremony!
That Chris is a real sweetheart at times.

Kacie B. gets a rose. Sigh of relief.

The look of terror on these gUrls' faces when, "Ladies, this is the final rose," is announced is insane.
I felt like I was watching a bunch of third graders listen to a lecture on IRS tax codes. 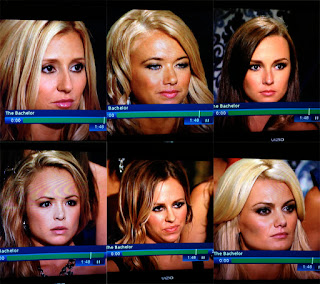 The final rose is handed out. And with with it: HEARTACHE.

Paige is really sad. She's failed miserably at the Bachelor Pad and now at this.
REAL QUESTION: HOW DO YOU BECOME A JUMBOTRON OPERATOR?

"This is the most embarrassing thing ever." -- Kelly
WRITE A BOOK, gUrl. Write a book.

Then she said, "devastation."
We need to get these gUrls a dictionary!

-----
Admittedly, I didn't watch the previews for the rest of the season.

The Jumbotron operator question was with me all evening, too. Definitely a career field I forgot to look into. I was SO SCARED of creepy 50 Shades of Grey girl...glad to see her go quickly!

I don't even watch the show and this had me thoroughly entertained.