Finally. Our long national boring nightmare is over.

Ben has told both women he loves them. Because that's normal and cool and fair and right.

I honestly do not understand who Lauren is as a person. She seems sweet and kind and whatever, but those shorts. Those damn shorts. She can't even walk in them.

ABC, what is this voiceover? Why is Ben yelling at me?

"I TOLD TWO WOMEN I LOVE THEM AND I KNOW THAT I MEANT IT WHEN I SAID IT BOTH TIMES. I CAN'T HELP HOW I FEEL. HOW AM I SUPPOSED TO GET DOWN ON ONE KNEE AND PROPOSE TO A WOMAN WHEN I'M IN LOVE WITH SOMEBODY ELSE?" -- BEN

First, calm the AF down. Second, why the F do you have to propose? Clearly, you can't be trusted with feelings, you need to take a gUrl to the lake and not propose.

Ben tells his parents that he's 100 percent in love with two women.

"To know that Ben could possibly be in love with two women is, first all of, really disturbing." -- Ben's Mom
BEN'S MOM IS ON POINT.

Lauren comes in to meet the parents and Ben tells some dumbass story about something super dumb Lauren said about meeting her parents. Ben is the worst storyteller in the world.

Lauren sits down with Badass Amy, Ben's Mom. She decides to tell BAM (Badass Mom) that she loves Ben and he loves her.

Amy brings up that bullshit about Ben being "unlovable."
BAM rolls her eyes.

Ben and Lauren sit down for a chit-chat.

Lauren drives away and Ben looks like a ghost threw up on him.

It's JoJo's turn to meet Ben's parents and Ben, the idiot, opens up with another story, but this one involves JoJo being a good kisser. I would've set his face on fire. What an ass.

JoJo sits down with Ben's dad and he asks, "What is it about Ben?" JoJo answers, "it's a lot."

Then, JoJo says Ben is her best friend and well, shit. Lauren didn't say that.
JoJo starts crying.
JoJo is even more nervous to talk to Ben's mom.

JoJo says her intentions are "so pure."
Nothing says "pure" like "fantasy suite."

Ben's mom is like, Ben is stupid and he doesn't know how to find love, but everyone is so #blessed.

Ben still doesn't have clarity. Even after his parents uttered the phrased, "blessed."

Ben has just realized he cannot propose to two women.

It's time for the final one-on-one with Lauren.

Lauren feels so full of happiness and joy and gratitude.

THOSE SHORTS ARE LITERALLY THE DEFINITION OF "PAINTED ON." 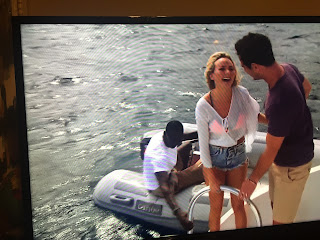 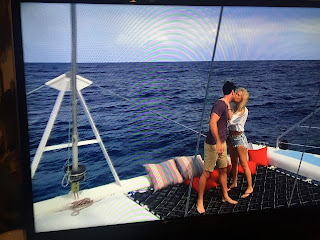 Ben tells Lauren he is stressed and that he hasn't slept.
Bored.

They get off the boat and Lauren feels defeated and confused, so she puts some makeup on.
She's nervous, but knows tonight is "so important."

Lauren tells Ben she's really emotional and scared.
Ben just says, "so much" has happened.
"So much."

If I was dating a man who was "in love" with me and "in love" with another woman and his only words were, "so much has happened," I would be like, DO YOU KNOW ANY WORDS?

Lauren is truly ready and "sure."

"Lauren, no matter what happens, you've made me better. And this was all worth it." -- Ben
Dumb.

Of course, this makes Lauren cry. Lauren has finally realized that Ben is ALSO IN LOVE WITH JOJO.

It's JoJo's turn for her final date and I'm thankful that she brought more than one pair of shorts on this beach vacation.

JoJo thinks this week has been really special and she's confident.

JoJo wants Ben to know that she has "so much faith" in Ben and making it work.

Ben says, "it's exactly what you think."

JoJo legit just said, "like, why are you so confused?"
LOLz.

They get out of the jungle and back to that mini couch in the hotel.
JoJo feels bad for making Ben uncomfortable.

Ben can't use his words and JoJo is wearing the sexiest outfit the hotel gift shop had for sale.
If he's going to say goodbye, he's going to regret it!!!!!!!!!

I appreciate JoJo's commitment to that wine and these questions.

Ben says he doesn't have any concerns about JoJo. (HE ALSO HAS NO CONCERNS ABOUT LAUREN.)

Ben keeps talking about these gUrls supporting him like it's not a competition for an engagement ring.

"Somehow, you've become my best friend." -- Ben
Could be that plunging neckline.

JoJo wants a sign. So, she takes him to the bathroom.

Ben leaves and says, "I love you."

JoJo is now crying alone in her hotel room.

Ben says, "I'm lost" about 27 times.
He really wants everyone to know he's in love with two women.

You know, technically, you could be in love with two women and still have handled this a little better, buddy.

Neil Lane was able to make the trip to the beach.
PTL. One of these days his calendar is going to be full. And then what?

Lauren is all, "every bone in my body is sure of this."

JoJo has been dreaming about getting dumped on national TV since she was a little gUrl.

"There's not an ounce in my being that isn't sure that's what I want." -- JoJo
So, what? You have no doubts?

JoJo is letting fear take over, instead of faith!
When fear comes knocking, answer with faith, JoJo!

Ben is ready to break a heart.

JoJo said "him and I" again.

JoJo is the first one up, so FIRST PLACE IS THE ACTUAL FIRST LOSER TODAY.
SEE YA, JO.

JoJo says Ben has "always promised" not to blindside her and she truly hopes today is not the day for the blindside.

What day would it be on then, JoJo?

JoJo gives a speech.
She's realized this was worth it. She's been scared, but she remembers what Ben said.
Ben said, "love isn't supposed to be easy, it's supposed to be worth it."

I think Paul said that in 1 Corinthians.

It's actually the Bible verse Ben has tattooed on his rib cage.

"I didn't know if I could find love, I found it with you, BUT I FOUND IT WITH SOMEBODY ELSE MORE." --Ben
Not a real sentence.

"I don't want to say goodbye. JoJo, I still don't question that I do love you." -- Ben
WHAT THE ACTUAL HOLY SHIT.
That's present tense, Ben.
You're breaking up with her.
YOU NEED SAY, "LOVED."
LOVE-D.
LIKE, YOU USED TO LOVE HER.

As Ben walks her out, he's still preaching his feelings and how much his feelings haven't changed.
For obvious reasons, she is not happy about this.

Before Lauren appears, Ben gets on the phone to ask Lauren's dad permission to propose.
He did not mention that he just told another gUrl he couldn't give her an answer on what wrong and that his feelings for her were real.

Ben talks about journeys and goodbyes.

"I want to kiss you on the face every morning." -- Ben
What a weird thing to say.

Ben, then grabs Lauren's face and says, "Lauren, you're my person."

NO ONE HAS EVER BEEN LESS READY TO GET MARRIED THAN THESE TWO.
Mainly because they probably think one of the things they have in common that makes this right is that they have the same favorite color and both "really love John Mayer."


God Bless America and everyone in it.