Ben terrified because he doesn't know what he is going to do. Does he get the Accord with leather seats or the hybrid Camry?

Pretty sure he just ranked his ladies.

First up is Caila. So far, with just one paddle down the river-- BORED. So awkward. She literally was telling him about the hotel's amenities. And Ben was so bored, he was listening!

Caila is the Marco Rubio of the bachelorettes.

Caila just wants to feel comfortable enough with Ben to tell him she loves him. Ben wants to know if they can talk about how "weird" she was during the date.

I can only pay attention so much. Only part of Caila has wanted to tell Ben something for a long time. So, part of Caila is in love?

"Oh, you sly fox." -- Caila
So, she's the only gUrl in the world that thinks an older gentlemen randomly leaving them a key to a hotel suite is sly.

So many fireworks. Other guests at this hotel probably think they are under attack.

Caila wakes up in that hotel room and just tells Ben she loves him about 27 times.

Lauren just needs to get these feelings off her chest. She also needs longer shorts.

Real question: does Ben plan these dates or does he say he planned the date because she has no idea what is planned?

"There's something about the water." -- Lauren
These people and their words.

Ben takes Lauren to hang out with a guy named Mel. Mel wants Ben and Lauren to help release a mess of baby sea turtles.

"We are helping turtles survive and that's an important thing." -- Ben
So important.

I think Ben prayed over the bucket of baby sea turtles before releasing them into the ocean.
I wish he would pray about his decisions to kiss all these ladies and the spend the night with them, too.

Unpopular opinion alert: those baby sea turtles are grossing me out.

Ben decided to tell Lauren about how he started crying in front of her sister.

Now, these two idiots are in an argument over who is too good for who. Listen, you're both just good enough for each other. No one is better than the other. You both deserve love and no one is unlovable.

All these gUrls get in the confessional and act like they have the nuclear codes, "I know I have to tell Ben...that I love him."

Now, Lauren is saying this "SECRET" is causing anxiety.  Do y'all know what a real secret is?

Like, if you haven't told this man you used to be a man and you aren't registered to vote in any state-- that's a secret.


Lauren is scared. It's scary.
But, what's scary?
The other relationships!

Ben doesn't want Lauren to hold in any questions, concerns, feelings or great 3-ingredient recipes she might have. He wants it all!

Lauren is freaking out and doesn't know if she can tell Ben she loves him.

Ben, the sly fox, slips Lauren the fantasy date card. I feel like you could almost see Ben mouthing the words as she read the card. LOLz.

Before Ben can even ask Lauren how she feels about the overnight date, she's all-- HELL YEAH, FANTASY SUITES ARE SWEET.


Lauren launches into a speech about "needing to tell Ben something" like-- a secret. Like, she was a Playboy model or has a boyfriend at home. NOPE. She's in love.

Places to find guys like Ben: a rec league basketball team, any business school in America, a sales conference in Chicago or Birmingham, middle school, a Republican rally, a college football game, Target, any Apple store

Lauren feels like waking up next to Ben is an actual dream.

Ben says  "I love you" again before she can and this is bullshit.

"Ben is my person. He's my person." -- Lauren
Christina and Meredith would not agree.

After exclaiming she's never been happier, Lauren remembers-- THERE ARE TWO OTHER WOMEN.

"I need to explore where my heart is with JoJo." -- Ben
Ben, your heart lies between your right and left lungs, in the middle of your chest and slightly towards the left of your breastbone.

JoJo feels SO lucky.
She feels safe.
JoJo trusts him.

Listen, I don't want to say this, but I have to-- JoJo should burn that bathing suit. Immediately. 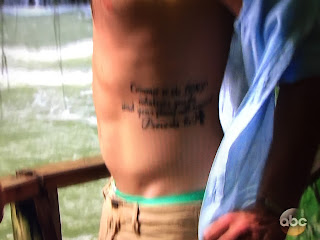 Yep, that's a tattoo with lady font on Ben's side. It's Proverbs 16:3. Not a lot of wisdom in the actual design he chose for the verse, but the verse is solid.
When JoJo thinks about the future, there's not a doubt in her mind that she wants to spend the future with Ben, BUT SHE IS SO SCARED.

JoJo doesn't want to think about what it would be like to lose Ben, so... HE SAYS HE LOVES HER, TOO.


Today is the best day of JoJo's life.
Ben is officially the biggest assmonkey of all-time. Ever.

Ben, you F-wad, this is where you decide to NOT tell either gUrl you love them. DUH. Do you know anything about anything at all?! Like. What in the literal hell is wrong with you?

JoJo is calling this the best day of her life.

"It doesn't scare me to tell you that." -- Ben
But, is there a contractual agreement?
TV contracts are real.

Now, JoJo wants to know "what happened" with her brothers. Why did her voice get so nasal-y?

Ben doesn't know JoJo's brothers ANY better and they don't know him ANY better.
: (

Ben is not scared.

JoJo is excited to talk freely.

Sexy-time in the hot tub! Uh-oh!

Ben has made out on the bed with every single gUrl while wearing bathing suits. That's like, serious.

That bed looks a little rougher than the other two beds did. : /

Ben said that was one of the best nights of his life.
He loves JoJo, he does.

Ben just can't "get there" with Caila.

Caila just really needs to see Ben, so she's in that Caddy and she's going to get her man!

Ben's just lounging around, staring at shit and here comes Caila!
In all honesty, I would not be shocked if Caila has restraining orders out against her.

When Ben sees her, he says, "What the heck?!" He wanted to say "hell" as bad as we wanted him to say it.

Those ABC Producers are like, really doin' it this season.

Ben says it "means a lot" that Caila came over there. He means "scary" and "inappropriate."

Ben decided to drop the bomb on Caila. He tells her that he is in love with two women. She is LITERALLY, his perfect wife. But, C YA, BG.

Caila is holding together. Kind of. She said Ben could walk her out, but she really wants him to take a long walk off a short pier.

Before getting in the Caddy she said, "I really did love you." She gets in and THEN...she gets out.

Caila is finally going to leave and then they just talk about how much they will miss each other.
Then, longest hug ever. Like, she was gonna get that hug in.

Ben hopes he didn't make a mistake, so he sits on the stairs with his head in his hands to think it all over. Caila is doing the same thing in the car.

IS THIS THE LONGEST EPISODE OF THIS SHOW EVER OR WHAT THE HELL IS HAPPENING? I FEEL LIKE I HAVE BEEN WATCHING THIS FOR MORE THAN HALF OF MY LIFE.

JoJo has zero doubts. ZERO DOUBTS.
Are all of these people on a loop?

"I can't imagine him feeling the same way about someone else." -- JoJo
Well, shit.

Chris said he was surprised that Ben said "I love you" back to Lauren.

"Are you the most anxious or the same?" -- JoJo

About the time the gUrls realize Caila ain't coming, Ben walks in. He seems very underdressed. Where do these wardrobe people find this much linen?

Ben couldn't feel luckier. Honestly, the situation he's gotten himself in has very little to do with luck. I don't think very many people would waste a wish from a genie on this one, Benny.