In 2005 I thought watching this show every Monday night was something fun to do with my friends. I regret that now.

Chris Harrison rolls in and tells the ladies they are headed to Las Vegas and I swear they must have heard, "Princess Kate is throwing you a brunch" by the way they reacted. I mean, sure, a free trip is a free trip, but we're talking about Nevada here. I would expect this reaction if Chris had said, "you're all going on a Disney cruise!"

Why is Ben driving that old Mustang around? If you are trying to tell me that Ben drives anything but a white Honda Accord, YOU ARE INSANE. Like, clinical.

A helicopter comes and picks up Ben and JoJo, while Olivia is having a psychotic break back in the hotel room. One moment she is the chillest and the next, she is crying and looks like she may have slept in a ditch the night before.

JoJo knows herself and knows she has a hard time opening up. Ben, on the other hand, is wearing a splatter paint blazer.

JoJo just got out of a relationship. Ben is sorry and he doesn't want her to hold back.

Ben's haircut is the saddest.

JoJo gets the rose, BUT THERE IS MORE.

"I've had the best time." -- Ben
This guy knows all the words and shit.

Ben takes JoJo out on the balcony to watch some fireworks. They make out and Olivia is upset that her "husband" is out there kissing another woman. She is very "upset."

What's up with those twins?

Ben takes the ladies to a ventriloquist show and considering Brooks & Dunn, Britney Spears and Celine were all doing shows in Vegas when this was shot-- : (

The gUrls have to have a competition. The twins feel like they are ahead of the game.

"I don't think many people have talents." --gUrl
YOU SAID IT.

Everyone thinks Olivia has a secret hidden talent. Arson isn't a talent, gUrl. Neither is stalking.

The gUrls have to perform their "talents" on stage in front of a bunch of drunk people who couldn't get tickets to Cirque du Soleil.

Each G gets to perform for approximately 35 seconds.

That one chick wore her normal clothes and hit a tennis ball through a hula hoop. SKILLZ. You can't learn that shit in school.

Olivia is now in a bathroom crying. We've all been there, gurl. But, most of us don't put on a sequined thong and bounce on stage like we're the closing act a VBS show with some nervous, sugar-high children.

"She's like a sex panther." -- Ben
What the F is a sex panther?
The guy who probably couldn't accurately describe an Old Navy fleece is now calling a gUrl a "sex panther."

Ben took that puppet and then that gUrl with the accent kissed it and it was very odd. I felt very weird.

Olivia pulls Ben aside and it was dumb. She said she was trying to be sexy, but still wanted to be awkward. Then, she stuck her fingers in her mouth for 12 seconds or so.

Blonde hair gUrl says she's in love, BUT, she's never been this scared to be in love.

Let's talk about Ben's leather jacket. Can't you just see Badass Ben toolin' around in a Hyundai Sonata with that jacket on? Why does he have on a jacket and those gUrls are sitting there looking very chilly.

Somebody got a rose. I don't know her name.

It's time for the one-on-one date and Becca got a big ass package in the mail. It's a wedding dress.

Becca is really excited, because of "who Ben is as a person."

Becca goes to meet Ben at a wedding chapel and he gets down on a one knee like a total assboat and pretended to propose.

Ben is going to legally marry couples today. HE CAN'T EVEN TUCK HIS DAMN SHIRT IN.
ASSBOAT. 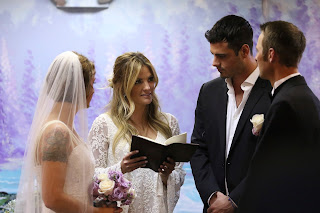 WELL, EVERYONE-- WE HAVE REACHED THE POINT OF A RECYCLED DATE IN "BACHELOR" LAND. THEY HAVE DONE THIS WHOLE SIGN THING BEFORE.

Now, we have to have this whole Becca is a virgin conversation. She's drinking whiskey, he's drinking red wine. RED FLAG.

That whole twin thing. IDK. If Ben was the one who actually recognized that he needed to put a stop to this horse shit-- GOOD FOR HIM. I imagine it was some production assistant who disagreed with having twins on in the first place and made the producers promise that this wouldn't go past four episodes or something.

What's next? A mother-daughter duo?

Olivia pulls Ben aside for the 293rd time. Ben is drinking a cocktail with an entire lemon in his glass. Like, what is he drinking and how can he even get to it with ONE FULL LEMON in that glass? 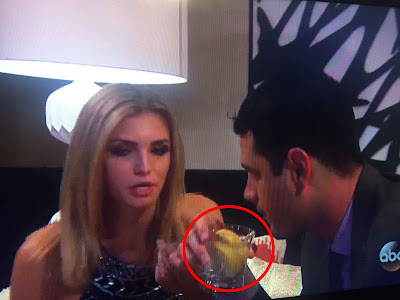 Olivia keeps apologizing.
She also said she is not insecure.
Listen, I don't know much about much (minus presidents and country music), but I know what an insecure human looks like and sounds like. AND WE ARE LOOKING AT ONE.

"I don't need you to apologize to me for jumping out of a cake." -- Ben
BULLSHIT, Benny. She needs to apologize for watching you sleep at night, too.

Olivia then tells Ben she is FALLING FOR HIM and it's the coolest feeling in the world.

As soon as she said that you could tell that she realized-- I could be going somewhere if you make me leave, but she stuck to her guns. And she probably, actually has a gun on her.

JoJo told Olivia that she is asinine. Olivia handled it very gracefully.
Gracefully = she truly believes Ben is communicating with her telepathically.

OLIVIA IS THE KANYE WEST OF "THE BACHELOR."

This woman isn't okay. Also, shame on the producers for just letting her sit there and babble and then dubbing it over the ENTIRE rose ceremony.

Olivia thinks she gets the final rose because she's the best. I think Ben is telling her to lock her shit up. She has NOT kept her game tight. At all.

Other chick that got cut thinks she got cut because she didn't kiss Ben.
I think she is totally right. : /