The last 7 days have been spent hoping and praying the ABC Producers would try a little something different tonight, like an episode without the gUrls or Ben. Or both.

Nope. Not only are all the ladies here, but so is Ben and they are all going to high school.

ChrissyPoo Harrison meets up with all of beauty school dropouts and not one of these gUrls would be able to wear their shorts in an actual high school. Finger tip rule, chicas!

Then, Ben makes some sick joke about what would've happened if his teachers would've been this good looking in high school.

I've been on a lot of first dates-- Some really great first dates and some really terrible first dates.
THIS ISN'T EVEN A DATE.
THEY ARE IN A HIGH SCHOOL CARRYING AROUND BACKPACKS.
What is even in the backpacks?


"Basketball really means a lot to me." -- Ben
America, this is your Bachelor.

Holy shit. Ben is making these gUrls race for his heart.
One G is barefoot, the other is wearing pink shorts from Old Navy.
The barefoot gUrl won and now she's the most unlikely homecoming queen ever.

Do they still make lettermen's jackets?

Now, Ben is in an old Mustang just toolin' around the track with his queen. Literally, they took like, 9 laps. 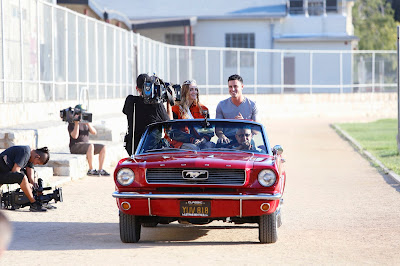 Becca, who I guess is crazy because she is here, decided to be here BECAUSE SHE WANTED TO BE HERE. She takes her wine and her basketball to a private court to shoot a hoop or two with Benny. Yes, just one hoop. She shot it once and then told Ben he could take his shirt off, but he didn't.

Out of nowhere, Ben throws on a really ugly blazer and kisses someone named Jen. I can only assume she got the first kiss because their names rhyme.

I actually agree with this tactic.

Ol' gUrl Lace (OGL) is not feelin' it, but she is talking about herself in third person.

Lace starts off her conversation by apologizing. She thinks Ben is THANKFUL for her apology.
What an odd thing to think/feel.

OGL thinks Ben is making eye contact with her, but I feel more like she was casting some sort of spell on him.

Jubilee saves Ben before Lace can totally finish her spell. Ben thanks her for pouring her soul out. He then kisses her. The kiss seemed like a handshake more than a kiss. Conversation is over, we've gotta do something type of thing.

All of the ladies have been sitting around drinking and bitching. A terrible combination.
UNLESS YOU'RE TALKING ABOUT A REALITY TV DATING SHOW.

OGL gets up TO TALK TO HIM AGAIN.
AND OH HELL NO THEY ALL SAID.
OH HELL NO.

The ladies are frustrated because LACE HAS TALKED TO BEN TWICE NOW.
TWICE.

Can you believe that?

Ben decides to take some gUrl in a dress to the top of a building. Ben wanted to thank the gUrl in a blue dress for her great attitude. This feels like one of those Daddy-Daughter dates I see on Facebook all of the time. No man has ever taken me on a date and thanked me for my attitude (could be a me thing, though, IDK).

Ben can only give the rose to one person and he gives it to the gUrl in the blue dress.
I find out her name is JoJo, which is a real name, I guess?
He called her JoJo, so it could be on her birth certificate?

We head back to the house and learn that Ben has decided to continue this process. That's right, Ben still thinks this process could work.

ChrissyPoo was in charge of the one-on-one date today and he decided Ice Cube and Kevin Hart should go on the date with Ben and and that gUrl.

This is odd because Ice Cube nor Kevin Hart need to be on this show to help their careers.

Kevin wants to go on the date, Ice Cube does not.

Lace is mostly mad because Ben is driving?

The guys take Ben to a liquor store.
NOW, THIS IS A DATE.

"What's your favorite color?" -- Ben
This is your Bachelor, America.

This chick is easy to please because she called riding in a car "out of the box."

Now, they are at a hot tub store and they are actually in a hot tub. Kevin Hart is also in the hot tub.

Ben and super boring chick who really likes riding in cars with boys (come on, nailed it) are now at dinner.

Ben wants to know, straight up, what kind of qualities gUrl who has a name, but I don't know it, is looking for in a man.

She says she wants a dreamer or something?

"What if everyone walks away?" -- Ben
Holy shit, Ben.
Who is the gUrl who tried to feed you to wolves?

gUrl met a guy on a plane, but she was more obsessed with being featured in the Southwest magazine than actually marrying the dude, so it didn't work out.

Oh, her name is CAILA?
It was on a sign, but was there a typo?
That's not how you spell KAYLA.

Of course, one of Ben's favorite singers is Amos Lee.
I just learned everything I need to know about Ben.

"This is my favorite song. Like, of all-time." -- Ben
To clarify, he's saying this about an Amos Lee song, not a song off of Jay-Z's Black album or a deep cut from Billy Joel.

The gUrls get off of an elevator and an iPad invites the ladies to enter the LOVE LAB.

Ben wants to know if science can help him find love.
But, science calls for everyone to wear very smile white outfits.
Ben gets to be fully clothed.

Okay, this is gross.
An odor test.

I definitely quit paying attention for a while.

One gUrl did say, "I think this is really valuable."
She probably reads horoscopes.
Oh, she also tried to kiss him while everyone was watching.

One gUrl got a really low score.

"You're trying to marry a guy and a doctor says, 'hey P.S. you're not compatible.' THAT WOULD BE REALLY EMBARRASSING." -- gUrl
There is actually some truth in that statement.

Ben really believes that those tests meant something.

"So, this is my bachelor pad." -- Ben
America, this is your most eligible.

Ben is wearing a hoodie and a blazer. Somehow, he still got this chick to kiss him.

Let me set it up for you-- his line is, "this is my bachelor pad," he's wearing a hoodie with a blazer and she still kissed him.

Ben gave his jacket to every gUrl he talked to.
Oh, sorry. That gUrl has a blanket. It really looked like something Ben would wear though.

That one chick says she only PACKED A PAIR OF JEANS AND TWO BOTTLES OF VODKA.
Pick her, Ben!
Pick her.

Screw science! That gUrl is the real deal.

The gUrl with the kids tells Ben that she has two "kiddos running around."
She actually just said she had two daughters.

Ben isn't scared of kids, so he kisses The Mom.

Olivia and science get the rose.
She says the show is over now.

The mom is crying.

Ben walks into the party and literally, four or five gUrls scream.

Ben's smoothest move is offering his jacket to gUrls.

Science gUrl steals Ben because she wants to take him "to a secret spot and kiss him until his lips fall off."

One of the gUrls calls Science gUrl a "selfish bitch."
Those are like, real fightin' words.

Turns out, Science gUrl is a master manipulator. She convinces Lace that she just needs to go for it and give it her all.

Lace gets some time with Ben.
I think Ben is drinking straight vodka.
Hopefully, he got it from that one chick.

Lace tells Ben she was really dorky looking when she was a kid. She has no photos with her, so she describes the photos to Ben. Can you imagine anything worse than looking at someone's childhood photos? Oh, I can! Listening to someone describe their childhood photos!

She is still talking about herself in third person, but now she's crying, too.

gUrl with blonde hair gets some time with Ben and he pulls out a photo for her.  A PHOTO OF THE TWO OF THEM.

"I had this made." -- Ben
He's acting like he commissioned a portrait.
He had Walgreens print off one 4x6.
One 4x6.

"I don't know how to make you feel really special." -- Ben
Smooth.

Ben finds The Mom and asks to open an Etsy shop with her.

BEN JUST WANTS SOME TIME TO THINK STUFF THROUGH.
I wish he would've done that when they approached him about being on this show.

The quiet gUrl from Oklahoma is FAH-REAKIN' out, Ben calls her name and now she pulls him aside.

She decides to leave.
Good for her.

Ben is okay with this because he wants the ladies to be "empowered."

"Ben doesn't even know who I am." -- gUrl
I feel bad because I don't know her name either.

Of course, that gUrl got the rose and her name was Amber.

The homecoming queen didn't get a rose.

"They came here to meet me and now I have to ask them to leave? It doesn't make sense." -- Ben
But, that is the ACTUAL premise of the show.