What a week in America. And now. This.

Shawn is still up in Kaitlyn's hotel room and he straight up asks, "are you in love with me?"
That answer isn't suitable.

Kaitlyn keeps trying to figure out what happened that made Shawn act like a crazy ex-girlfriend. She thinks he knows, but he doesn't know. HE IS JUST CRAY.

Kaitlyn feels guilty. NOT BECAUSE OF THE SEX'N.
Because of the relationships.

Kaitlyn spends some time over-looking the hotel landscaping and Shawn contemplates life on the stoop, while Nick takes a lap with a guy I have never seen before. Tanner?

So, what is this two-on-one date?

Did that boat meet one single government safety standard? There's just no way.

Look at that beach. No wonder Irish people aren't tan.

"You're one in a million." -- Joe
It's like he read a book of cliches on the plane ride over.

There are 322 million people in the U.S. alone. Half of those are probably women and maybe half of those are somewhere in Joe's age range. You're one in a million isn't really a compliment. He should've said, "You're one in 86,876,653 million" to be more realistic. Now, KaityKat is just thinking about all those other women and comparing herself. Oh. Isn't she Canadian? Yeah. Makes it even worse.

JJ pulls Kaitlyn aside and tell her that he is divorced because he cheated on his wife.

So. What friend told JJ, "Hey. Been a rough couple of years-- you cheated on your wife, lost your job, moved in with your parents-- why don't you go on TV?" No. No. No.

Kaitlyn promptly kicked JJ off and told she Joe she wanted to get to know him a little more.

Shawn is still fah-reaking out, but now he's on a park bench. Has he been outside all day?

Has anybody ever told this guy anything before? I mean, you tell him, "you have the best shoes!" and now, he literally thinks he has the best shoes of anyone.

"You are the sweetest!" and now,  he absolutely believes no one is sweeter.

Shawn needs to wrap his shit up and take a Xanax.

Joe comes back with a rose, says one sentence and Shawn gets up and leaves. HE IS NOT STABLE.

So, he takes his feelings right back to KaityKat's hotel room.

What's this guy like after a real first date? He flies you home for the second date to meet grandpa on his death-bed? FIND YOUR CHILL, BRO.

Kaitlyn is alone in her hotel room crying again. She has to be a little annoyed, right? Or just like, tired?

KaityKat is still convinced that Shawn knows about the sex. BUT, HE DOESN'T EVEN KNOW.
WHICH IS TERRIFYING, BECAUSE WHAT HAPPENS WHEN HE DOES KNOW.

Kaityln and Shawn talk and I FF'd through a lot. Shawn wants her more than anything.

"It worries me that Shawn needs all this reassurance." -- KaityKatYeah, that's a lot of hard convos in real life.

Like, every morning, "Shawn, I love you the most. Yes, THE MOST. Forever. Yes, forever plus infinity, Shawn!"

She sex'd it up AND told bros they were the one. She's more upset about telling bros they are the one.

Kaitlyn's heart is still open and she just wants to toast to that.

Nick gets his alone time with Kaitlyn. Nick feels SO GOOD about the week.

HE DID SAY THAT.
HE DID.

From last week: Nick sits on the couch and tells the guys everything that happened without them even knowing what he is telling them. He even says it was "intimate."

Nick is crying because he is an over-confident guy.

Kaitlyn no longer has ANY concerns.

Meanwhile, Shawn is watching that fire burn.
I hope he's considering putting that blue tuxedo in it.

Like, there's no way he thinks that blue tuxedo is spot-on. Not for this anyway. Maybe for some low-budget MTV awards show. Not this.

Kaitlyn tells Shawn she regrets sneaking around and telling him secrets.

Kaitlyn knows she messed everything up by talking to Shawn, because clearly, Shawn can't handle his shit. Like, he would ruin a bag of shit. Can you imagine letting him handle something other than a bag of shit?

I am supposed to believe that Shawn is not getting a rose. 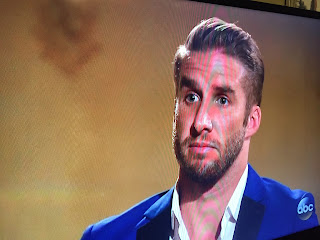 Shawn gets the rose.


Ben Z. is leaving. HE JUST DOESN'T OPEN UP TO PEOPLE VERY OFTEN.

I think Ben Z. probably feels like he's dodged a bullet at this point, right? Right.

Everyone but Jerad has to ride in a giant bus called the PaddyWagon. Everyone wants to "take a road trip with someone you really like." And Jerad gets to do it.

The couple takes a lot of selfies an Jerad just feels like he's on a road trip with his gUrlfrand who had sex with another man 3 days ago. : (


Jerad and Kaitlyn head to the Blarney Stone and give it some kisses for luck.
Then, Jerad drops KaityKitty off at her castle, her "legit castle."


Jerard thinks they are both transparent. : (

Kaitlyn thinks she has finally made it through the day and over the hump, WHEN OMG CHRISSYPOO HARRISON KNOCKS ON THE DOOR.

Chris explains to Kaitlyn that she has basically ruined this entire process-- even without the sex. She tells Chris mostly everyone.

Chris lets KaityKitty know that they are switching up the order of things. Next week, everyone gets some off-camera time with her before hometowns. The playing field needs to be even, because right now a bulldozer couldn't get Kaitlyn's field out of this mess. She needs an expert road crew. Like, all the highway departments. All the "slow" road sign holders in America.

Chris explains to the bros that Kaitlyn can't be trusted, so the rules have changed. There will be hometowns, but not until they have all had the opportunity to see her naked. What's fair, is fair.

The Dentist and Kaitlyn head out for their one-on-one and HERE COMES THAT HELICOPTER.

Chris thinks this could end up being the biggest day of his life. This is as close to magic as he's ever been. (Should we tell him magic isn't like, real? Or nah?)

Kaitlyn asks Chris if he wants to stay in Nashville. He picked Nashville, in part, because it's a great place to raise kids. That's something a lot of young single bros do. Right?

At this point, Kaitlyn is ready to spill the beans. She starts crying and is trying to tell Chris some stuff and be honest and then he literally spend the next 3 minutes about half-an-inch away from her face.

Chris describes his time on the show as "joy and terror."
Almost nailed it.

If I'm trying to have a hard conversation with someone, I appreciate comfort, but like, I NEED YOU TO GET OUT MY GRILL, OKAY? BACK IT ON UP.

Kaitlyn has promised herself that she is not going to lead anybody on and Chris just needs to know more.
THE MORE IS THAT YOU NEED TO PACK YOUR SHIT UP AND LEAVE, CHRIS. Get your toothbrush, your toothpaste and that cupcake mobile and get on outta here.


"I would much rather know now than next year or in 20 years. She deserves a lifetime of happiness and I'm not sure she's read to find that right now." --Chris

I HAVE NEVER SEEN ANYONE CRY THIS HARD IN MY LIFE.

HE TOOK THAT SCARF AND USED IT LIKE A DAMN SNOT RAG.

This season is some pretty epic terrible television . I continue to watch only because I get to read your recap the following day and laugh my balls off. Keep it up.