We pick up where we left off in beautiful San Antonio, Texas. The Europe of Texas!

Ian is still mad. He is so over poop jokes he can't even think deep. Ian thinks Kaitlyn is a surface-level person and he needs her to be a big ole cry baby or this is it. They are not in it for the same reasons and he's ready to walk. Her blood is boiling and she is "super offended."

If you can describe yourself as "super offended" you are likely very mature and deep.

Anyway. Ian walked. Then, he got in the Suburban of Doom and talked about being "deep" about 247 times.

Nick runs to KaityKat's rescue and lets her know that he saw that Ian convo coming. He wants to be deep, but he wants to be goofy, too.

"I want to be the one person who knows you inside and out." -- Nick
That sounds like a bad Old Navy commercial.

The bros head out to the Alamo (REMEMBER?) and I can only imagine how much differently that story would have turned out if Davy Crockett had these guys in his unit. Picture a giant Texas-shaped hole in the United States.

Then, that guy with his haircut and his Men's Wearhouse vest got sent back to welding school.

It's like all these guys loaded up in a van and hit up that 1 for 19 sale at Jos. A. Bank. Everyone but that dentist guy. He shops at the same place HIllary Clinton gets her suits.

The boys are headed to Dublin! And I can only imagine that there's a lot of dark beer in their future.

This is the first time Joe has been out of the country and he thinks going on a one-on-one date would be " a lot of fun."

"We're in Europe right now!" -- Jerad
It's obvious these people know nothing about Ireland.


Nick has 10 minutes to get ready for his one-on-one date.

You would think these guys could've looked at Wikipedia on the flight over, right? Just a quick run-through of facts about Ireland? No. There's no time. Only cliches.

Nick describes the park where they are-- there are families and dogs. And one sexy gUrl.

Nick and Kaitlyn can't keep their hands off of each other.

NICK WENT SHOPPING ON THE SET OF AN OLD AVRIL LAVIGNE VIDEO.

KaityKat is really scared of birds, so walking around in a park like this is basically an episode of "Fear Factor."

The cliches just keep on rolling in like a bunch of damn potatoes and Nick and Kaitlyn do an Irish jig in the street.

I'm imagining Nick choosing those green pants because he thought someone would pinch him if he didn't wear green all day. : (

Nick bought matching rings for the two of them. They're just walking down the street and then Nick threw her up against a wall and kissed her. Then, they kiss in front of a Kay's Jeweler. Then, they went to a pub and he put his hand up her shirt while ordering a whiskey.

NICK IS DRESSED LIKE HE'S IN A CREED VIDEO, IF CREED WAS STILL MAKING VIDEOS IN 2015.

Do we even address the boyz in the hotel? I mean, we all know what is happening. ABC PRODUCERS, SAVE YOUR EDITING TRICKS FOR SOMEONE ELSE.

Nick and KaityKat head to dinner in an old church. Nick's outfit is enough to send me over the Cliffs of Moher (look it up on Wikipedia).

I feel like he beat up several 6th grade boys on the way to a school dance to piece his outfit together. Are his pants too tight to tuck his shirt in? Why wear a tie if you aren't going to tie it?

So, Kaitlyn is glad Nick has done this before (WHAT?), but she's worried everyone else is judging him for it (DUH).

Nick goes on this rant about how he's just concerned with being himself.

"...at the same time, I just believe in...everything." --Kaitlyn
Believing in everything is a sure-fire sign of being a deep thinker.

So, at this point ABC has really done it. These two are going to town in an old church and finally Kaitlyn gives Nick his rose and they go at it some more.

Eventually, the two head back to her hotel where they shut the door and do things most people in their situation would do in the back of a car in a movie.  This is a family blog (just meaning-- my family reads it), so no details will be shared. There was heavy breathing. And I don't think they were lifting weights.


The next morning there is a lot of shame and maybe a bit of regret on the part of Kaitlyn. Kaitlyn says they "deserved" that time together. That's a weird word to use to describe the situation. Especially as the camera shows one of the parties involved talking to themselves expressing how bad they feel and the other is shown doing a walk of shame. If that's what your relationship deserves...WHOA. 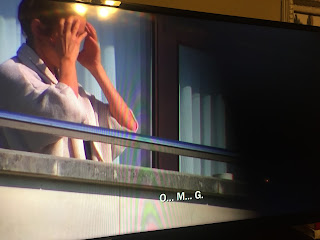 I mean, now...Kaitlyn is talking about how she is hoping Nick won't sex and tell. She says this over and over and over and over again. Nick sits on the couch and tells the guys everything that happened without them even knowing what he is telling them. He even says it was "intimate." 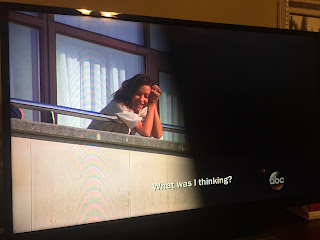 Here's the deal-- adults have sex after dates all the time. Hopefully, they aren't doing it on TV, while dating several other adults at once. Usually ends poorly for most parties involved. If KaityKat thinks sexin' it up with her suitors is a good idea, she thinks it's a good idea. Not sure what else to say about it other than I HOPE HER GRANDMOTHER DOES NOT OWN A TV. I HOPE HER MOM AND DAD DISCONNECT THE INTERNETS. 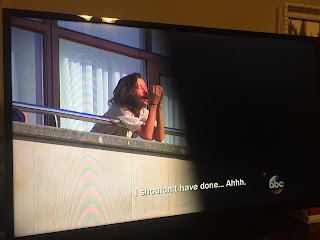 AND I PRAY A CHILD DOES NOT COME OUT OF THIS HOTEL MEETING. You sure as hell know these two would name that baby Ireland and call him/her "Dubs" as a nickname for the rest of his/her life.

It's time for the group date and everyone is talking about someone being dead or something.

Like a total cheese ass, ChrissyPoo Harrison meets the boyz in the street and says, "I regret to inform you that the worst has happened. Kaitlyn is dead."

You see, what he had meant to say is-- KAITLYN IS ABOUT TO BE DEAD TO YOU, BECAUSE SHE TOTALLY DID IT WITH THAT OTHER GUY LAST NIGHT.

So, I guess this date is a fake funeral/wake.

Listen, no one wants to attend their own funeral more than I do.
This is weird.

So, I fast forwarded through the coffin scenes.

I mean, what's more hilarious than a fake funeral?! Especially for a guy who's mom died.

Jerad gets some time with Kaitlyn and it's all "honest" and "honest." Has he been honest about his job at Denny's or did he play it up like he manages some restaurant he inherited from his billionaire grandpa?

Everyone is all "don't talk about Nick."

Shawn gets some alone time with Shawn and describes the casket as "it was funny." Now, he wants to show some pictures of his family to her!!!!!!!!!!

The producers got into his sister's Instagram account 15 minutes ago and printed off these pics for him. What a treat! What a moment!

Kaitlyn loves the photos so much she wants to keep them!
(Weird.)

BUMMER.
Jerad gets the rose.

KaityKat whisks Jerad off to a church for some alone time.

In 20 years, this will Carly Rae Jepsen and a whole new generation of gUrls will feel the way I feel.
Sad. : (

Jerad says this is Kaitlyn's FAVORITE BAND.
I AM CALLING BULLSHIT SO HARD ON THAT ONE.

Back at Guinness World Headquaters SHAWN IS FLIPPING HIS SHIT.

He has pulled his producer aside...

"Man-to-man, friend-to-friend, are you going to tell me she wants Jerad over me? Do you not know what we have? She came to my room for 6 or 7 hours and said 'you're the one. you're it.' What, she's going to get to the fantasy suite and bang two other dudes? ... Trust is the thing... I'm about to cry." -- Shawn
Shawn, woman-to-man, you signed up for this shit and she already banged a dude in a hotel room.

Shawn decided to go to Kaitlyn's hotel room because her words don't match her actions.

THIS IS THE MOMENT IN THE SHOW THAT IS STRAIGHT OUT OF A ROMANTIC COMEDY.

SHE THINKS HE KNOWS, BUT HE DOESN'T KNOW, HE'S JUST UPSET.

Hands down the best recap you've ever written.