I missed last week because of my 9 to 5 and I'm not even mad.

Am I a cool chick or an amazing woman? I don't even know. I don't think I'd care if I was labeled, but "cool woman" does sound off, so Nick has something going for his phrasing.

I love it when a man says he isn't doing something for the drama. Any man who has ever even thought that statement, much less said it out loud is about 29 steps below me. And I mean that.

I guess it's time for a rose ceremony and Kaitlyn just has to trust her heart. She really wants this to work.

JJ and KaityKitty ran the bases and then I quit paying attention for 5-7 minutes.

That one guy-- Shawn? doesn't want to say Nick's name. He's not going to lower himself to say it. Can you imagine? KaityKitty assures Shawn that Nick isn't going to take away from their relationship.

One said if he didn't get a rose it'd be like getting stabbed in the heart.
Nick compared not getting a rose to a "sting."

Clearly, someone is more invested in this situation.

Nick gets a rose. No one got stabbed.

Everyone needs a coat.

After the ceremony, Kaitlyn lets the group know they are going on a trip...somewhere she has ALWAYS wanted to go... San Antonio, Texas! Hot damn! Can you imagine? What's next Saint Louis? Maybe Birmingham?

Kaityln is ready for a fun date and NO MORE DRAMA (Shout out, Mary J. Blige!). She gets an old ass truck and picks up Ben H. She also says "Ben H." about 47 times.

There's an old lady there and she is wearing floral and loves dancing. They are not great dancers. They do not win.

It's time for dinner on a rooftop!

Ben H. was in a long distance relationship from the very beginning and he's not super comfortable sharing that information.

"Where did she live?"
"I'm not comfortable sharing that."
"Okay."

I'm a little confused by this conversation. He's ready, he's not ready. He hates FaceTiming?

A Mariachi band greets the gang and I fast forwarded. I guess everyone has to write a song. A Mariachi song?

How many times can we watch people write a song on this show?This is the group date challenge every third time. We're going to skip this.

Kaitlyn thinks the guys trust her and her decisions. : (

Joshua, the industrial welder, has set up a haircutting station for KaityKitty. Worst decision of his life. And what a weird way to spend a date.

"gUrl, I wanna show you how much I trust you. Go ahead and ruin my hair."

The guys just sit around and talk about Nick. Nick just spends his time making out with Kaitlyn. Nick is winning.

Joshua confronts Nick and starts off by saying, "this is goofy."

Now, Joshua has decided to TAKE HER TO CHURCH. (Get it?)

Kaitlyn is ready to rumble.

Kaitlyn confronts everyone and asks them if they are being honest. They all say, "Oh, yes! Yes!" Then, KaityKitty calls out Joshua again and now everyone is mumbling.

"WHAT AM I MISSING?" -- KaityKitty

"I hope these guys aren't going to leave me out to dry here." -- Joshua
CRICKETS.

"Wait. We were just talking about how goofy this felt!" -- Joshua
Maybe use a stronger word.

"I am not kidding around. I am looking for a husband." -- Kaitlyn
So. Nick gets the rose.

Shawn B. is ready for his one-on-one deep in the heart of Texas!

These two are going to kayak down the San Antonio river/ Riverwalk.

Kaitlyn compared it to Europe. : ( 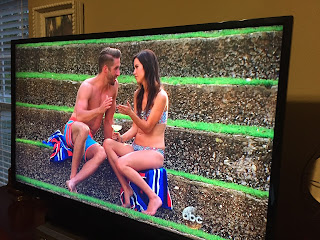 "I just want people to trust me." -- Kaitlyn
Well, don't be a friggin' idiot.

This guy seems sweet and honest, but maybe not a scholar. You know?

So, Shawn was in a car wreck a few years ago. Luckily, he was wearing his seatbelt.  Kaitlyn gets this information and I'm sure she was just in shock, but she kind of giggled. But, to make up for the giggling she starts stroking his hair.

The music in the background makes it seems like his dad murdered his whole family and now he's just on this show. The music gets happier and they start kissing.

I guess I'm judging a person by the cover of their "let your guard down" story.

"Women like me. I don't think that's ever been an issue for me." -- Ian
Love a humble man.

The only person who will have a conversation with Ian is Nick. This is telling.

Ian just compared his impending confrontation with Kaitlyn to the last stand at the Alamo. : (

WHAT IS THAT DENTIST WEARING. 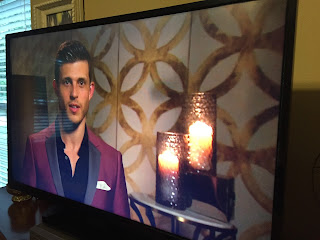 IF CHARTREUSE JACKET BOY WALKS IN NEXT TO A GUY IN KHAKIS AND A BLAZER, I'M ASKING A LOT OF QUESTIONS. A LOT. ALL OF THE QUESTIONS.

"I want to toast to honesty." -- KaityKitty
Oh. Is that something you toast to?

Kaitlyn takes Jerad to her room and she must have no idea that he works at an Applebee's.

Ian's patience has run out.

Ian lists all of his accomplishments, skills and high-points.

"I am a very eligible bachelor. In this country and in this world." --Ian
Saying you're VERY ELIGIBLE basically means you are VERY SINGLE.

So, to all the men reading this: I AM A VERY ELIGIBLE BACHELORETTE.

Meanwhile, Kaitlyn is just kissing everyone.

Finally, Ian gets his one shot. (Can't you just hear Eminmen in the background?)

"It's difficult for me to hang around a bunch of guys making poop jokes." -- Ian
Actually, that sounds pretty shitty.

Ian explains how deep he is. He wanted to meet a really desperate sad gUrl and instead got KaityKitty. Ian thinks KaityKitty just wants to make out with boys.

"I don't question his intentions, I question your intentions. I really see you as a surface-level person. I wonder if you're really that shallow, because I don't see anything beyond the surface." -- Ian
Can you imagine a person you've barely had a conversation with say that to you?