I am still recovering from the disaster that was the GRAMMY Awards, so I don't know if I have the stamina to get through this panic attack on the the local Mexican buffet' restaurant's floor.

I know the Bible says to take care of the widows and the orphans, but it's talking about my grandmother and stuff. Not this G, right?

I've had a panic attack before. I drank a beer and sat on the couch and was fine after like, an hour.

As SpecialK is taking in oxygen through a mask like she's in ICU, she asks to talk to Chris.

Can you imagine being this dude right now? She just blamed her panic attack and him and his cancelation of the cocktail party. They kissed.

She is now wearing a giant fur coat/blanket. Actually, scratch that, it's definitely a rug.

"All of the feelings were just too much." -- SpecialK
Heard that.

It's getting pretty weird between SpecialK and the other ladies. She can feel it in her heart that she is the woman Chris will marry.

He picked that gUrl named Megan (who?) and she had glitter all over her.

Ashley I. finally got a rose and she be like, PRAISE REPORT.

SpecialK gets a rose over the gUrl who's super into kale. KaleG is all, "she wasn't playing by the rules, but actually, there aren't any rules."

Part of me wonders if these gUrls even went to junior high and ever cried at lunch?
I would assume that's a universal thing, but they seem pretty green to the ways of women?

In a real fun twist, the gang is headed to South Dakota.

HEY, ABC, WHAT IS WITH YOUR BUDGET?

Also, do you think the gUrls know Chris is from a town even smaller than Deadwood? And it doesn't have the tourist-y stuff? If you have to drive over an hour to get to a TGI Friday's... you're in trouble. (AND WHY IN THE HELL ARE YOU DRIVING THAT FAR TO GO TO TGI FRIDAY'S?!)

Chris goes to one of those old-timey photo booths. BY HIMSELF. And TV show or not, WTF.

SpecialK DESERVES the one-on-one, because she told Chris about her situation. But. She doesn't get it. She's at a juncture. She needs reassurance. She's NOT happy. (JOIN THE CLUB, G.)

Chris is walking through a field.

He says he's been waiting a long time for this. In real life, he legitimately means less than 2 weeks.

These two are going on a horseback ride. Chris thinks Becca looks "smokin' hot" on "that horse."

Carly decides it's time to quit acting like a cruise ship singer and start throwin' bows. Everyone wants to be "open" with SpecialK.

It's a nervous laugh.

"I didn't go through all this shit...death of a spouse...I didn't go on this show to be defeated." -- SpecialK
Sounds like a Nicholas Sparks book, right?

Apparently, this horse date is really interesting, because we've seen so much of it.

There's a campfire and kabobs.

Chris decides to find out Becca's 5-year plan. Chris wants wants four to six kids. Becca would like to settle on five.

Becca hasn't ever really shared her feelings with a boy before.

Becca knows she's the only gUrl who hasn't been kissed. AND SHE IS A VIRGIN. She's also the only gUrl on this show ever, who's like, "WHAT WILL MY DAD THINK?!"

OH! She gets the rose. And a kiss. Their body language is weird.

They are going to make some sweet music!

Chris says country music is a "big" part of his life.

Chris has asked John and Kenny to "vet" the gUrls. They are also supposed to be writing a song. Of course, Carly "kind of writes songs a little bit."

JADE IS LIKE, "FEELING STUPID."
She's talking about music and not makeup.
She just has too much to say.

Big Kenny takes Jade down the street. They are running.
Jade starts screaming something.

Britt kisses Chris in front of everyone. Now, Jade is back on the struggle bus.

"It's hard to write a love song when he's clearly into somebody else." -- Jade
JADE! You've found your thesis, run with it!

The Gs are drinking some brews (my guess is Mich Ultra) and it's time for some "live" music.

Chris has decided to go first.

"Chris is not wearing farm boy from Iowa boots...OR PANTS." -- John Rich
I've said it before and I'll say it again: John Rich is the smartest man in music.

A few other patrons have stopped by to watch the performance. Obviously, ABC recruited them off the street and gave them free beer.

Chris finishes his song and for the millionth time-- I couldn't hear or understand one thing he sang.

It's Britt's turn! Sweet, sweet music. She can hear it whenever he's around!
That's not a song! That's like, two lines.

Chris is VERY impressed with everyone.

Carly pulls Chris on to stage.
She's a professional, you know?

Here comes Jade!
She's diving more into her feelings! She's gambling on love! She's not much of a gambler!

Let's review: Jade is NOT a gambler, but she started an organic makeup company.
Let that soak in.

If she's not a gambler, I hope she has a rich ass daddy.
Or at least an engineering degree to fall back on.

Chris was caught off-guard when Jade said she had feelings.

Y'ALL.
DID A THERAPIST COME IN DURING NON-SHOOTING HOURS?
WHY IS EVERYONE SAYING "FEELINGS" SO MUCH?

Britt and Chris sit down for a second and Chris reveals he has a "surprise."

I hope it's like the time Spencer spray painted the wall in his new apartment with Heidi and she said, "it's not girly, it's not cute, it's not anything."

The surprise is a Big & Rich concert!

Can I make a shameless plug for my day job?
If you're wondering why I don't write much on here other than this, it's because I have a full-time job that pays me to write!

Big & Rich pull Chris up on stage with Britt.

Chris is the world's worst dancer. And then he threw that sweater off. I used to get in so much trouble for putting my clothes on the floor. The Reg would say, "why do I buy you nice things and you just throw them on the floor!"

Chris and Britt come back and the girls are acting like they just went to a funeral.
NO. But, they are walking into their deaths.
There is no way this will end without someone dying.

Chris tried to explain the situation and then just left.

"I'll let you gUrls have the rest of the evening to yourself." -- Chris
Yeah, that's what everyone wants. 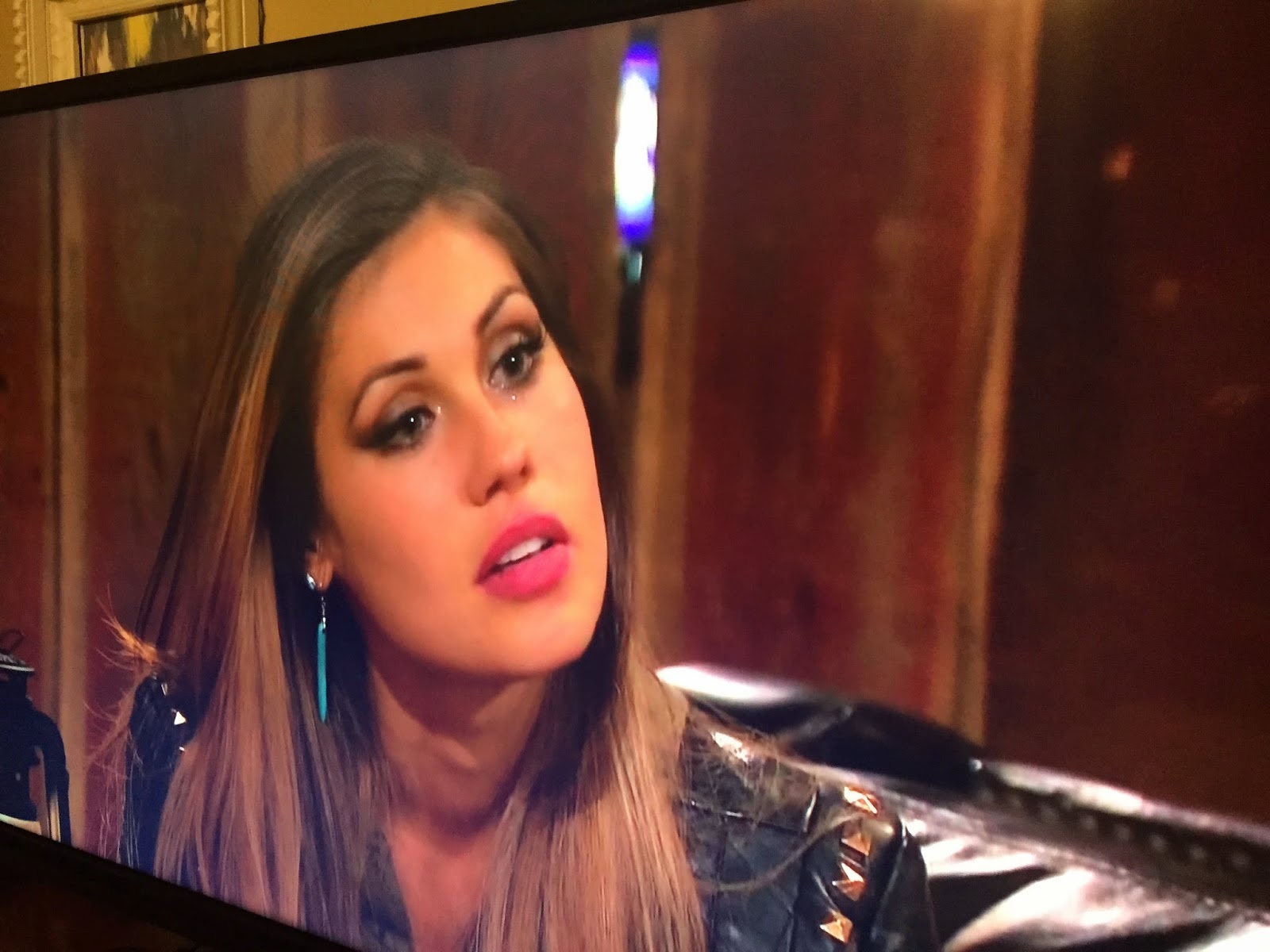 Whitney was timing how long they were gone.
They were gone for over an hour AND SHE DOESN'T EVEN LIKE COUNTRY MUSIC.

Life ain't fair, y'all.
Sometimes, someone else gets to go to the concert.

Does everyone else know this a TV show? A TV show that is essentially a contest?

Are they all only children?

A couple of years ago my dad bought my brother a John Deere riding lawn mower for his birthday. Not even a special birthday! But, I don't even have a yard! So, like, it was okay that he got a really nice present and I got a pair of jeans. You know?

Chris says he is going to make the best of this.

SpecialK was naming all of the presidents. I would've done the same thing.

The helicopter lands and there's a cabana waiting on them. Chris is drinking whiskey and the Gs are sipping on some white wine. Chris starts to chug the whiskey.

"This is taking logic and pairing it with love." -- SpecialK
She makes a good point, BUT THAT IS NOT WHAT IS HAPPENING HERE.


Ashley I. gets some alone time with FarmerChris and she decides to spend her time talking shit about SpecialK. Oh, no. Doesn't she know how this usually ends? The gUrl who tells on the other gUrl never wins in the end.

Son, "there ain't enough bourbon in Kentucky."
ANOTHER WORK PLUG.

It's time for SpecialK's alone time with Chris.

"I'm prepared to be a wife, because I've been one." -- SpecialK
WOWOWOWOWOWOW.

"I want my wife to be able to handle social situations...someone people want to be around." -- Chris
BURRRRRRRN.

Chris drops the bomb that Ashley I. told on SpecialK.

SpecialK thought she could trust that ho.

SpecialK and Ashley I. are sitting on the bed alone.
SpecialK stares at Ashley I. for a solid 13 minutes. 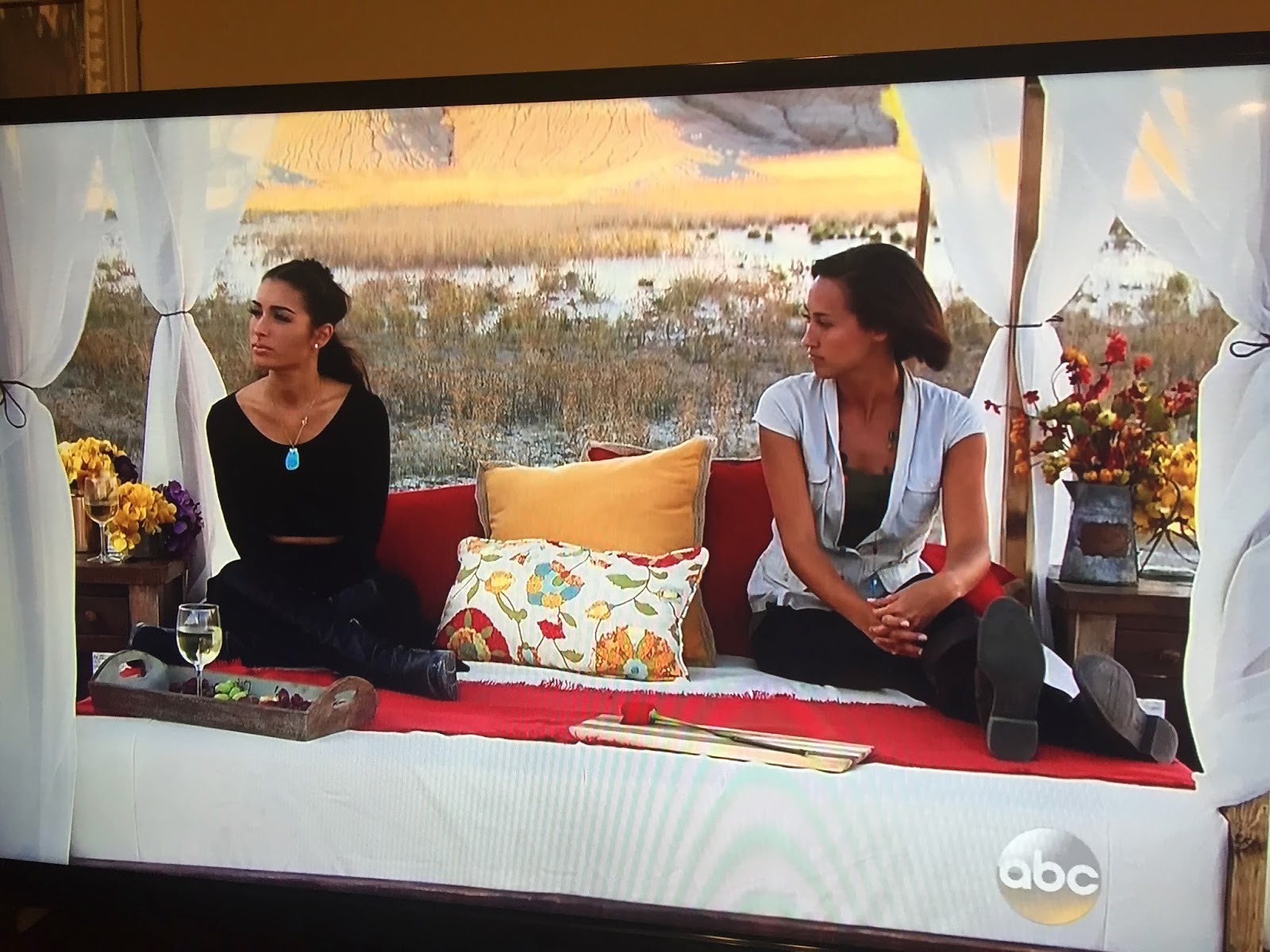 If they are both so damn smart, what the hell are we watching?

Ashley I. wanders off and starts crying and then finds Chris.

Chris starts talking about maturity and this chick is just bawling her face off.
Then, she admits that she is always crying around him.

Chris takes this opportunity to talk about maturity and lifestyles.

Chris doesn't think Ashley I. can give her the lifestyle she wants.

In a real act of maturity, she then says, "You think Britt wants that lifestyle?!"

She wanders back to the bed crying and SpecialK is just smirking.

ALL OF THE Gs AT THE HOTEL THINK SPECIALK MURDERED ASHLEY I.

"I'm just really confused. I'm trying to make sense of this and I can't." -- Whitney
WELCOME TO MY LIFE.

Ashley I. is now crying alone in the Badlands.
JUST LIKE TEDDY ROOSEVELT IMAGINED!

Chris tells SpecialK that he sent Ashley (THE VIRGIN) home and this bitch don't even see it coming...

Chris wants to be honest.

He sends SpecialK packing.
He wants the absolute best for her.

So, the helicopter leaves both of those Gs in the Badlands.
They don't even have coats.

The ABC Intern goes to take away SpecialK's bag and all the gUrls at the hotel start popping champagne.

"I came here to challenge myself to the adventure of love." -- SpecialK
Definitely a book title.

The music makes it seem like they really are leaving those two Gs there. FOREVER.

NOW, NEXT WEEK, WE HAVE TO SUBJECT OURSELVES TO LIKE, 8 HOURS OF THIS SHOW.

"SpecialK stares at Ashley I. for a solid 13 minutes."

I literally. can't. even.

I literally, can't. even.