We head out to the city of Mil-a-wau-kee ("Wayne's World," yes?) to meet Nick and his family.

Nick's favorite place in the city is a building full of cheese!

Nick takes Andi to a brewery because she's never been to one before. Of course, there's some polka music and of course, Nick wants Andi to dance.

After the dance Andi picks up some flowers and we get to Nick's house to meet his "very large family." There are a lot of people in there. Which, isn't awkward until they all stay in the exact same positions and just drill Andi. They were all sitting like they were about to take a class photo.

Nick tells someone, I guess his sister that he's in love with Andi.

Sister gUrl pulls Andi aside and tells Andi that they cannot see him go through heartache again. WAH WAH WAH. During the convo, Andi makes this face. 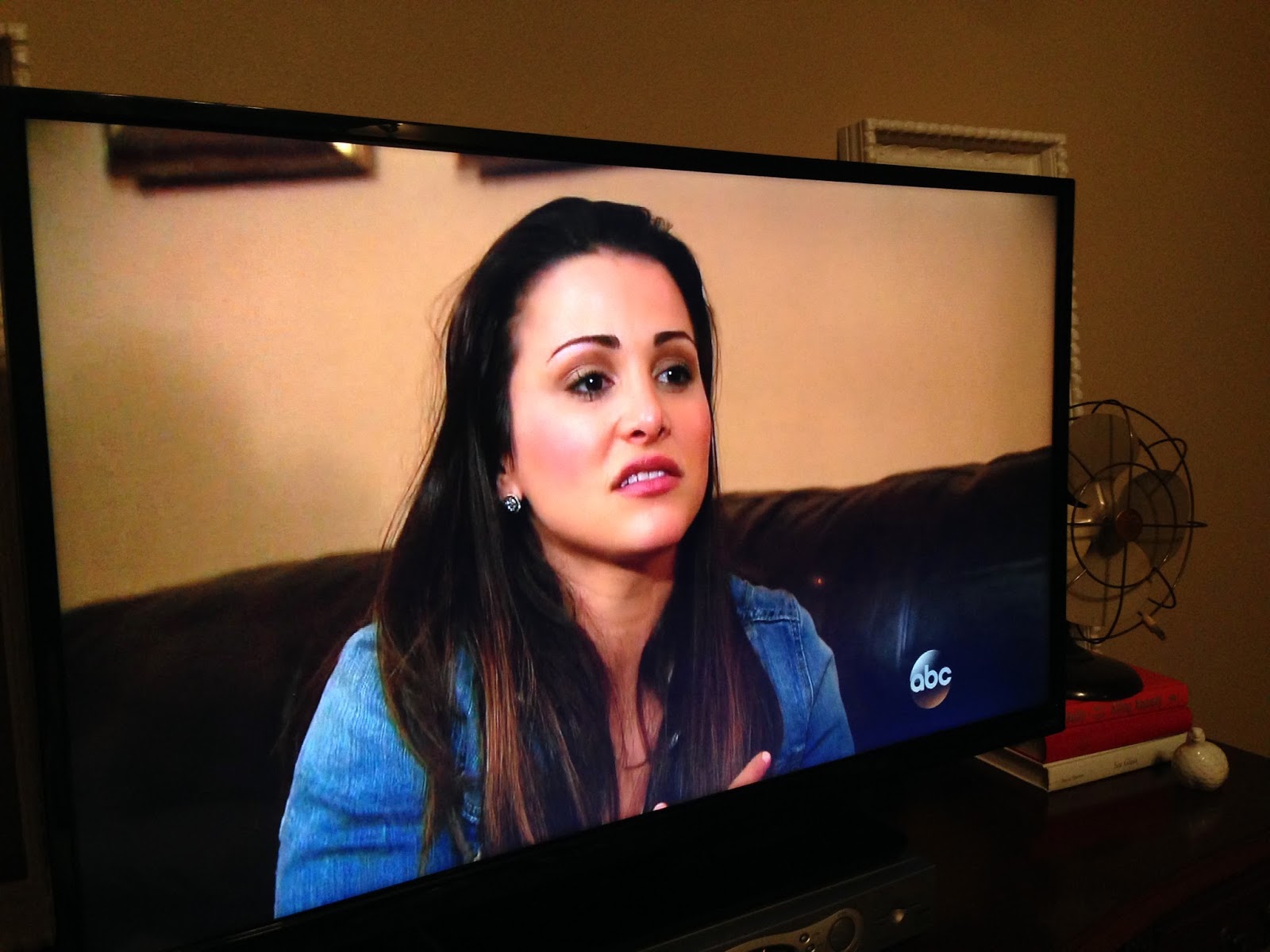 The tiniest sister pulls Andi aside and reads some questions from a list. Andi explains to tiniest sister what a "mental connection" is, which is, just irony at its finest.

I'm just waiting on Mitt Romney to show up on here. Or some sort of sister wife. Where did all of these people come from?

Andi names all of the family members and everyone claps. She called the situation a "green light."

"I will never get enough Andi." -- Nick
Also the opening line to a Lifetime movie.

Nick just thinks of Andi has "his gUrl."

Andi is headed to Iowa. Growing up, there was a family in my church from Iowa and she told me it stands for IDIOTS OUT WALKING AROUND.

Andi feels very open today. I think she could be talking about the fields.

Chris has "some fun things" planned. Let's guess! They drive a tractor, milk a cow and maybe go fishing or shoot a gun.

So far, Andi is mostly impressed that Chris lives in a house and not an apartment.

From everything I can tell, Andi has never seen an open field and definitely never seen a tractor.

I've driven a tractor before. It was the Kia version of a John Deere tractor. This is the Maybach version of it. And of course, my father was running alongside the tractor screaming the entire time.

Andi and Chris are concerned that Andi might not be able to live in Iowa on a farm.

"What would I do here?" -- Andi
"There's definitely an opportunity to be a homemaker." -- Chris
NEXT.

Oh. He was kidding. He did suggest law in the next town over. PTL.

"My family has a lake house in Alabama." -- Andi
Her version of farming.

While they are sitting in the field an airplane flies by with a sign that says, "Chris loves Andi." You usually see these at football games imploring fans to visit a Fire____.com website. So, yeah, this one was sweeter.

I don't think these people have seen each other in the last decade. They just hugged everyone as if someone was returning from some sort of POW situation.

Andi thinks living in the country makes meeting the family even more intense BECAUSE SHE WILL HAVE TO SEE THEM ALL THE TIME.

I think Andi thinks they are going back to 1940 and there will be no communication and no way off of the farm. Ever. It's like a kidnapping situation. She thinks she's being kidnapped versus getting engaged.

Of course, Josh takes Andi to some little ass baseball field. Scratch that, "baseball diamond." Josh has trouble watching baseball or even picking up a baseball.

In a twist, Josh threw a few pitches to Andi and she was good.
SHE SO COULD LIVE ON A FARM.

After running the bases and being "turned on" they make out on the field.

It's time to head to the Murray home. WE EVEN GET TO MEET AARON MURRAY.

Josh cries when he sees his mom. But, like. Then, we had to meet Josh's dog, Sable. He went after that dog. Like, I hope he took a shower before touching anyone else again.

During family dinner, we hear all about Aaron's NFL draft updates. He was drafted by the Kansas City Chiefs, FYI.

After dinner, Josh's mom tells Andi he is in love.
Andi asks if Josh can cut the chord from Aaron.
Awkward.

Andi is worried that she won't ever be able to skip one of Aaron's NFL games.
Baby gUrl, you'll have to get a pink jersey and everything!!!!!!!

Andi sits down with Aaron and he explains that he's growing up and he knows that it's time for Josh to have a family and skip a football game every now and then...BUT, NOT BEFORE WE PLAY A FAMILY FOOTBALL GAME IN THE YARD.

I was kind of embarrassed for everyone involved.

But, they seem like really sweet people and just genuinely wanted her to know that they're super into Aaron's football career and she should be prepared for that.

Time to get to Dallas(S)! Marcus is super excited to show Andi around in his leased Mercedes. He's treating Andi to a trip to the Tom Thumb at Highland Park Village. Oh. Just kidding. He's trying to get her drunk. Because he's performing a strip routine.

NOTHING IS OKAY. NOTHING IS SACRED.
EVERYTHING IS TERRIBLE.

Andi calls this "every gUrl's dream" and it's the saddest I've been in close to 3 years.

I lived in Dallas(S) for 7 years. You only go to Highland Park Village for three reasons: it's Christmas and you want to look at lights, you're a stay-at-home-mom and you need something OR you think that Anthropologie has something the mall Anthro doesn't. There are are not 25-year-old dudes hanging out there. Ever.

Marcus is so excited to introduce everyone to the gUrl he's "madly in love" with. Then, Marcus' niece gives Andi and him a homemade bracelet. Immediately, the sister pulls Andi aside.

Andi doesn't really let sister get a word in for awhile. Who is Conrad?

Brother just wants Marcus to be happy and to "GO FOR IT." Marcus starts crying. He wants brother to know that he appreciates him. It's a very tender moment.

Mom asks Andi what she thinks is special about Marcus. OY.

This is the fist time Mother has seen Marcus this happy. Too bad Andi ain't moving to Dallas.
Also, what would mother do if she knew about the strip routine earlier that day? I can't imagine.

"Seeing a future with you is the most 'awe' moment I could imagine. I love you. I truly do." -- Marcus
What an awe moment?

Marcus put himself out there and then he called Andi his soulmate. : (
OOPZ.

Now, we learn about the death of Eric.
I'm going to skip that part.

Marcus does NOT get a rose. Marcus has to take a moment to say his goodbyes.

Marcus doesn't know what to do because Andi was his "everything." I mean. That's intense. It was like, one month and a TV show. "Everything" is a lot.

He regrets telling Andi he loves her because it "blew up in his face."

"I believed in something that wasn't there." -- Marcus
Like a ghost!