The Bachelorette :: Desiree : Men Tell All.

This is the hardest thing in the world for me to pay attention to. Trying to re-cap the "Men Tell All" epi is much like trying to diagram an accident where the only witness is a toddler with limited vision and no real concept of time or space or laws.  : (

The epi started with Des and former Bach couples showing up at Bach viewing parties. That's cool or whatever, but at one point Trista said that Bach fans were, "family." Like. Who? FAMILY? OY. : (

We were then treated to a sit-down between Emily, Ali and Ashley. These four ladies were just blabbing away like the best of best frandz. Mainly, it was the Ali show. She was playing queen bee and told Des that she confronted a bad dude on her show for "women everywhere." : (

Also. They were drinking water. Just water. So. That's a party I don't want to be invited to. : (

It's finally time for the boyz to tell "all," which loosely translates to, "some." : (

I forgot about that guy that apparently majored in hash tags.
And that guy that invited Des to the fantasy suite on the first night.
And the non-white guy.
: (

And then, there was that guy with the gUrlfrand.

WARNING: NO WAY I CAN MAKE IT THROUGH ALL OF THIS.

Ben's summoned to the hot seat and I hope and pray that Chrissy Poo confronts Ben and that tank top debacle.

SOCIETY, HOW DID WE GET HERE? 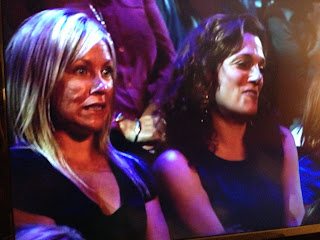 Ben says he's a very aggressive person and that's because where he "comes from" you pursue women "hard."

Apparently, everyone got pretty butt-hurt by Ben not wanting to be frandz.

And then, like, someone was in Vegas and told someone else that Ben is a deadbeat dad! : (

And then, it got weird and Chrissy Poo was all, "who was a good dad?" Like. I'm pretty uncomfortable at this point.

James is up next and he recaps that talk that happened in the van. James said he got "bullied." Which, thatz one of those words you aren't allowed to throw around anymore, right? IDK!!!!!!!!!!

James said the other boyz ruined his chances with Des. : (

Mikey defends James by saying everyone in life should have a "plan B." This is most concerning because I'm assuming that this show is "plan A" for these people??????? : (

"We can meet all these tall gUrls..." -- Kasey, recapping what Mikey said
Sad because I'm not tall.

Mikey stands up and yells at Kasey.

Listen. Listen. Listen.
I was a teenage gUrl once. As a teenage gUrl with frandz, you sometimes get into arguments or fights with other teenage gUrls. One time, I got into a fight with my BFFs during 3rd period English senior year. It's kind of one of my saddest moments in life. After watching this, I'm not that sad anymore. That fight looks so mature compared to this. These men are sad. : (

Chrissy Poo asks James if he'd be the Bach. James said yes, in a roundabout way, and then the entire audience booed and James looked genuinely sad. Which, I would be sad, too. I mean. An entire audience of women booed him.

Juan Pablo was next.

In summation: everyone, boyz and gUrls, is obsessed with JP. He played soccer. He's a dad. He has an accent.

Chrissy Poo busts out the antique journal and reads the poem written in invisible ink.

Zak's poem says that, "love is our only hope for happiness." Which, I can back that up, but I'd have to get all Gospel on you. (PLZ CONTACT ME IF YOU WOULD LIKE TO MORE ABOUT LOVE AND HAPPINESS AND THE GOSPEL, NOT WRITTEN IN INVISIBLE INK.)

Zak says his love, "just won't go away." He's still got it pretty bad for Des. I just hope he got that antique journal back. 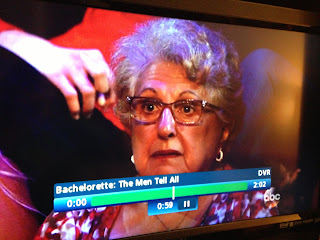 Des rolls out and I kind of like her dress. She looks like the cover of the new "Great Gatsby" soundtrack.

Jonathan apologizes for getting all frat-boy-roofie on Des.

Des says she couldn't gage emotion in Ben's eyes when he was talking. THAT IS THE SCARIEST THING I'VE EVER HEARD ANYONE SAY IN MY LIFE. That's some "Law and Order" shit right there.

Is James wearing that same suit he wore more than once during the season? Mikey definitely is wearing the same suit.

In my heart of hearts, I hope they make James the next Bach, because TERRIBLE. I would watch the hell out of that ish, y'all.

Juan Pablo asked why he never got a one-on-one date and Des didn't really answer she just said something in "Spanish" and everyone cheered.

Zak wrote another song and well.
LIFE IS OVER NOW, Y'ALL.
THIS IS IT.
NO ONE CAN RECOVER FROM THIS.

EVERYONE SHUT IT DOWN.
LOCK IT UP.

I'VE ALWAYS WONDERED WHAT THE END OF LIFE WOULD BE LIKE AND THIS HAS TO BE IT.

That was like, the shortest song ever. He only played like, four notes and no chords or anything.

Here's the thing: Zak isn't even trying to make it in life as a musician. He's just pulling that guitar out like it's a Tuesday at Sigma Chi and three gUrls came to his room to "hang out."

There comes a point in life where YOU HAVE TO STOP DOING THAT. Especially in public. Especially on television.

I'm a gUrl, I live with two gUrls, I know a lot of gUrls: I can safely assume that 98% of those gUrls would be mortified by a serenade like this. I mean, unless you've had A LOT to drank and you're 19.

I cannot recover from this. I feel like I need to drink a bottle of Nyquil to make this memory go away. I just want it to go away.

Everything is so silly!

Y'all. I haven't laughed yet.

No one can pronounce anything in German.

Have I told y'all about the time I tried to teach myself German in 7th grade? Can you imagine? That was a pretty weird phase of mine. Basically, I just carried around a German phrase book and told everyone I was trying to teach myself German. Kind of like how Zak is rolling around with that guitar like it's a thing. IT'S NOT A THING, ZAK.

We end with a 6-hour preview of the next two episodes. Which, like: TWO MORE EPISODES?