So, I've been working the past two Monday nights and I was hoping I'd be working this Monday, but I just couldn't come up with anything.

Ben is just hanging out on the beach doing math.

Ben's first hometown date is with Amanda in Laguna Beach. Prayers that Lo, LC, and Stephen show up. Nope, the special guests are Amanda's kids.

Those lil' Gs have on some intense sandals.

Ben helps the big G with something in the sand, so now she is ready to play. The littlest G is having some problems with this whole being on a beach with a strange man and some cameras.

The "couple" heads back to grandma and grandpa's house and Auntie is there, too. Grandpa is concerned that Ben isn't ready for kids and that he's too young.

Grandma pulls Ben aside and lets him know that she's "quite cautious."

Next up, we head to Portland. I don't even know this gUrl's name, so I hope they put it on the screen.

Lauren is ready to show Ben "the city that made me." I watch "Portlandia" and she doesn't seem super into making her own deodorant or anything. IDK.

Ben was very impressed with the "Keep Portland Weird" wall. Ben is the most plain-Jane guy alive. PLZ take him to some hipster coffee shop, Lauren. PLZ. I want someone to ask him if he makes his own car tires.

Lauren doesn't think she's going to get approval from her family. Who wouldn't approve of a successful guy in "sales" who drives a white car and feels "unlovable"?

Ben really hit it off with the old ass dog (OAD), so things will probably work out. The entire family is drinking  white wine, but Ben is drinking whiskey. Oh, now he's drinking red wine. I wonder if dad thought that was annoying?

Lauren's sister is asking some questions. She doesn't want to "grill" him, but she is.
She has hesitations because Lauren is eligible. She is funny, smart and beautiful.

I THINK MY BROTHER WOULD PUNCH A GUY WHO DID THAT IN FRONT OF HIM.
He would be like, "Whoa. Nevermind. Do whatever."

The tears sealed the deal for Sister.
Now, Sister has to ask Lauren what's up. Sister reminds Lauren that she was just in a relationship a year ago.

Lauren's dad wants to know how she is different from the rest.

Dad isn't into the fact that Ben is telling the same thing to three other fathers "out there." Ben almost started to cry in front of dad, but he kept his shit together. Mostly.

Dad "loves" that Lauren feels strongly about Ben, but he's not that into it. So. IDK.

Lauren did not tell Ben that she loves him.

Ben is somewhere in Ohio for a date with that gUrl who spells her name way incorrectly.

Ben says this is his deepest relationship, so I hope he asks her to change her name soon.

"This is where I became my own person." -- gUrl
She was saying this about her high school.

I'm still not sure I am my own person and this G said she figured that out in high school?!
Millenials. Ugh.

Caila's dad is the CEO of "this" toy company, so they are going to design a house together. 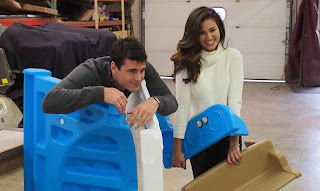 "Your favorite color is blue, so this should be blue." -- Caila
WOWOWOWOWOWOWOW.

Now, they are going to the toy factory and Ben cannot even handle this excitement.
He seems like a guy who claps when the plane lands. : (

Ben carrying her out of the toy factor is the worst rom-com ending I've ever seen in my life and I've seen all of the movies. 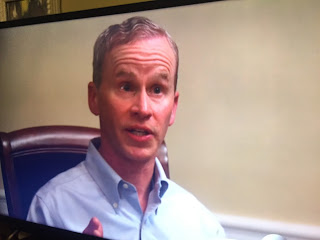 He asks Ben what it's like meeting four sets of parents AND CAILA IS MAD.

WHY ARE ALL THE PARENTS ASKING THE SAME QUESTION.
I mean, I get it, but... every single parent has asked WHY DO YOU LIKE MY DAUGHTER?

Caila lets Ben know that she isn't looking for just any Tom, Dick or Harry. No idiots allowed.

"What's in your heart?" -- Caila's Dad
HE IS WEARING YELLOW PANTS.

Caila starts bawling and tells her dad that she is in love, but she doesn't want dad to think that she's getting swept up in her emotions.

IF THIS CHICK SAYS "MOMMY" OR "DADDY" ONE MORE TIME IMMA FLIP MY SHIT.

HOW CAN YOU CALL SOMEONE IN ADULT BRACES "MOMMY"?

Did someone die? Why is she so concerned with time?

G has on leather pants. She ain't as quaint as she's letting on. I don't remember anyone in "Pleasantville" wearing leather pants.

Caila did not spill the beans about being in love. It's too scary.

Next, we head to the town where all my dreams died-- DALLAS.

That shirt is a little sexy for mom and dad.

Ben sends JoJo flowers and a letter. NO. NO. THE LETTER IS FROM CHAD.
SHE READ HALF OF A LETTER BEFORE REALIZING IT IS FROM SOME OTHER DUDE.

Oh, ABC, you slinky sons of bitches!
You got this gUrl good.

JoJo calls Chad.
Chad knows what love is now. This is how he feels.

BEN IS OUTSIDE.
WHAT WILL HAPPEN.

JOJO IS CRYING WHEN BEN COMES TO THE DOOR.

What the hell is your sweater, Ben?
I think he took that sweater from Caila's closet. 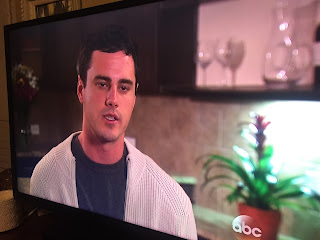 Ben is super intuitive, so he realizes right away that she is crying.
Since he is so into his emotions and JoJo's emotions, he asked her what was going on.

JoJo was super honest and legit with him about everything, but it's really hard to take her super seriously when she's wearing a sexy pirate costume.

"How are you feeling?" -- Ben
Such a sensitive man.

JoJo is super confident in her relationship with Ben. She knows Ben could've run from those flowers, but instead he sat on that couch and asked the tough questions like, "how do you feel?"

In the middle of talking about her family dog or something, JoJo just says, "I love you."
Honestly, that's how I'd do it. Just NBD, don't worry about it. Maybe he won't notice.

JoJo and Ben arrive at the family mansion and her brothers are acting exactly like older brothers should act while on national TV-- screaming, yelling.

"Ben, what sets JoJo apart from the other gUrls?" -- Mom

Ben can't even answer all of the questions JoJo's family is asking him. It's one question on top of another, non-stop, bambambambam.

That one brother is kind of Dallas fancy, so I bet he wants to burn Ben's sweater.

He cannot wear that sweater to any church in Dallas, much less a bar.

The Brother Bears take Ben into a very formal sitting room and one brother just stares at him and the other one asks questions and then stares at him. Like, death stares.

JoJo cries on the bed with her mom.

"No, there are still three other gUrls involved." --JoJo
"Oh." -- Mom
Mom just thought this was a TV show for her daughter, I guess?

The Brother Bears sit down with their sexy pirate of a sister.
Speaking of sisters, didn't she have a sister come to the door?

"How can you fall in love with someone you've only been on two dates with?" -- Older Brother

Uptown Brother does not like that JoJo is talking Ben up this much.
Older Brother doesn't think Ben is as emotionally invested in this situation as she is.

Older Brother confronts Ben and accuses him of brainwashing. So, Older Brother thinks Ben is a cult leader or something.

Older Brother is now accusing Ben of being coached up in his answers.
Parents are pacing back-and-forth.
Also, JoJo's mom is drinking straight from the bottle.

Dad steps in and says he thinks Ben has answered all of his questions and thinks he is honest.

"I came to Dallas because I really like JoJo." -- Ben
That's the only reason to go to Dallas.

"I'm more than a little bit confused." -- Ben
He's likely never been confronted over ANYTHING in his life.

JoJo, the sexy pirate, put Ben in that Suburban and she's scared of losing him.

So, they'll be fine.

So, every gUrl is in love with Ben and it's silly to even talk about roses, because "it's so much bigger than that."

Ben struts out into that rose ceremony like he's about to pitch on "Shark Tank" and he knows his idea is real, real dumb.

Amanda does not get the rose.
Amanda has two children.

Ben walks Amanda out and they sit on a bench.

Ben watches Amanda's limo drive away with a very confused look on his face. He is starting to ALWAYS look very confused. This guy.

I highly doubt that OAD has ever received a crimmas card of his own.