"It's the political AND cultural capital of the country." -- Ben, re: Mexico City

He would say the same thing about Senor Frogs in Cancun.

The gUrls arrive at the hotel and most of them have never been to a hotel before.

"It's one of those hotels that just makes you feel special." -- gUrl
Sounds very "Pretty Woman."

Ben does old Bach trick where he wakes up his G at like, NO A.M. All the gUrls act like they've never woken up early or ever. My family used to leave on road trips at 3 am.

Instead of going back to sleep crazy Olivia gUrl (COG) decided to not go back to sleep. COG has decided that Ben is not ready to be a dad.

Ben has decided to take Amanda in a hot air balloon. He's dressed like a model from Eddie Bauer. He's probably the last guy on earth who shops at Eddie Bauer.

The hot air balloon drops them off in a field, so I assume the next part of the date will involve some sort of kidnapping for drug money or something?

Ben just wants to be around Amanda and see what "life is like" or something.

Ben is legit the type of guy that dips his Oreos in milk.

Ben is learning that Amanda is a beautiful person.
But, there's still a lot he wants to know.

Amanda was cheated on by a super shitty dude, who was also the father of her children. It's a terrible story. I don't know why she would add to the story by coming on this show.

Ben cannot believe Amanda is here and giving up her time to be here.

Ben is not going to run and he ready to talk through "us."

Amanda gets the rose.

Jubilee hates group dates. She just hates competing with other gUrls for a man's love.
So, she's never heard of this show before? This is a totally new concept for her?

The group heads to a classroom to learn a little bit of Spanish.
Then, they have to say inappropriate things in Spanish to Ben.

LIKE, SORRY-- IT MEANS THE SAME THING IF YOU SAY IT IN SPANISH.
YOU CAN'T JUST SAY, "I AM FALLING IN LOVE WITH YOU."

Jubilee ain't having any of this shit.

Of course, COG was pretty convinced that it was real. IT WAS ELECTRIC.

WHY THE ACTUAL F WAS HE EVEN FAKE DOWN ON ONE KNEE?
GET IT TOGETHER, ABC.

The group heads to a Mexican restaurant to "cook some real Mexican food."

Everyone has to break into teams of two with Olivia and Jubilee fighting over Ben, so of course, Olivia wins. BEN LOOKS SO THRILLED.

HE ALSO LOOKS LIKE HE KNOWS HE COULD BE MURDERED SOON.

I'm bored. They have to cook food, but the recipes are in Spanish.
OH NO, WHAT A LIFE AND DEATH SITUATION.
CAN YOU IMAGINE WHAT THIS IS LIKE FOR A PERSON?

Olivia is treating this time as a one-on-one.

That twin wants to throw up.

"And her breath is horrible." -- Twin
To be blunt, her mouth smells like "horseshit."

Ben thinks it'll be "fun" to see the woman cook with different utensils?????????

Why does he think Mexico has different utensils??????

Spatulas are NOT different in Mexico.
Are they??????

Ben likes that people are smiling and cooking.
Ben does not like that Jubilee might be holding back a little bit on having fun.

You know what? JUBILEE DOES NOT THINK THIS IS FUN.
SO. 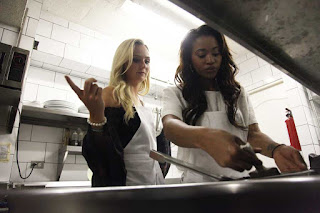 The chefs sit down to eat the prepared dishes and they are being really sweet.
Just like, "could be better" stuff. They probably want to puke, though.

Jubilee's dish WINS and the chefs want it in their restaurant.

Olivia wants to go into this night and just "reconnect."
Somehow, she gets Ben first and gets him to kiss her.

Jubilee is not used to being overshadowed. Luckily, someone told the Producers that and Ben came to get her for a talk. Ole Jubz didn't even want to hold Ben's hand.

This is all very childish. So, it's really great TV.

Ben is "just confused."
Ben doesn't know if he can fix it, so he "might have to say goodbye."

In a very short amount of time, Ben has decided that nothing could exist between Jubilee and himself. This transition happened very quickly. But, Jubz is the other gUrl who could murder potentially murder him, so it is best he get at least one future murderer out of his life.

Ben walks Jubz out. She has to get in a really scary Toyota Corolla.
The show didn't even get her one of those sadass mini-vans.
: (

Ben sits on the steps and fake cries for a few minutes. Mostly, he's upset that Jubilee could end up somewhere unsafe because he put her in a sketchy Mexico City cab. This is on him now.

After his pep talk, Ben has decided that this is all worth it.
He better be getting at least, $300,000 for this bull shit.

The other gUrls "don't get" his connection with Olivia. They are having that moment every G has-- "if he liked her once, how could he now like me? She's PSYCHO."

Ben and the gUrl with the accent are headed to a Mexican Fashion Week show. You know what they say about fashion weeks-- Paris, Milan, Mexico City.

WHAT A TIME TO BE ALIVE.

Ben asked Lauren H. if she had ever modeled and she told us, "I can't get high cheek bones."
What?

Teacher gUrl is a teacher, not a model.

"Soft elbows." -- Fashion lady
That's exactly the direction I would expect someone to give a model.

Ben gives Lauren a pep talk while wearing a VERY OFFENSIVE shirt. That shirt should be allowed. 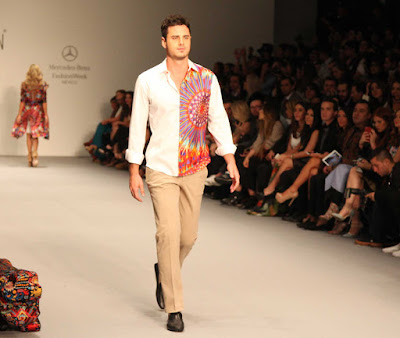 I fast-forwarded to dinner.

"It's been a slow burn." Ben, re: his relationship with Lauren H.
The phrase "slow burn" usually describes a sexually transmitted disease of like, something that catches on late in its existence, like an album or a movie.

I hope Lauren H. has now heard Ben say this about her.
I hope she's kind of pissed.

I am super bored.

Lauren H. got cheated on. A year after being cheated on, she woke up on her burrday and said, "I CAN CHOOSE."

She starts crying when Ben says today was a fun day.
That's too easy.
If you start crying when a boy says, "that was fun" you aren't okay. She probably thinks a boy patting her on the head is him being sexy with her, too. : (

She gets the rose.

We've come to the point in the season where the other gUrls are ready to sabotage another gUrl.
Ben plays his part by saying something about "just want to know if these gUrls are being real."

Amanda is sharing her feelings with the gUrls and talking about her kids. The gUrls are being sweet and listening.

"I feel like this an episode of 'Teen Mom.'" -- Olivia
Them's definitely fightin' words.

Listen, I'm a proud "Teen Mom" watcher and if someone ever compared me to someone on that show-- whoa. Whoa. Whoa. Some of those chicks have their shit together, but mostly-- they all need some therapy and time away from the cameras.

Not something you say to a single mother. No matter her age.

Twin sits down and starts crying.

Ben has finally decided that he's not seeing something in Olivia.
HE SEEMS TO BE MISSING SOMETHING.

Ben and Olivia sit down, for the 19th time or so.

Twin calls other Twin in tears.

All these Bs be crying, so Ben interrupts the rose ceremony and decides to pull Olivia aside.

The gUrls have decided that Ben can "do whatever he wants" and all the rules are out the window.

Oh, of course. TO BE CONTINUED.
FML.

My good friend and avid fan "The Bachelor" needs your help! Courtney Backus Norton is participating in the 14th Annual Kiss a Pig Gala “Uncle Ham Wants You”-- for the local chapter of the American Diabetes Association.

Courtney has enlisted the help of a very special pig to help her raise money and awareness for this special cause. Wiley has been traveling all over the country to help her out, but he always make time for his favorite show on Monday nights. Nothing says "let's cure diabetes" like shitty TV, right?! 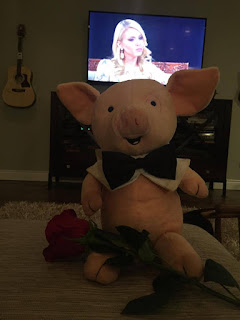 To help Courtney and the American Diabetes Association out, check out www. snortinnorton.org. You can also follow Wiley on Instagram, at @WatchWiley.

ChrissyPoo Harrison won't see any of your donations-- this is all going to the good folks of the ADA, so help a sister out.

gUrl, you need to wrap up the last two episodes. ive been checking every day! these are amazing!

I really wish I could read your thoughts in episode 7. My boss recorded it and I just watched it. Things that made it great:
* take your date to McDonald's
*ask woman working register if you and your date can come work behind the counter, because you've always wanted to.
ABC has reached an all time low.

More recaps! These are so good!