the bachelorette :: kaitlyn : the finale.

Listen. I don't have a problem with Chris Harrison. I know he doesn't write his script. And hopefully, prayerfully, he doesn't pick out his own shirts. That pink thing is an absolute disaster.

We have finally come to a closing point on this trip down love's hellacious highway.

So. Kaitlyn's family is intriguing. KaityCat's sister is like, the biggest Bach fan EVER. She's all, "Nick V. ?!"

Dad and StepMom are super chill, while sister is explaining the rules of who all this stuff works.

"I am totally shocked that he is here." -- Mom
Then, Kaitlyn went on to tell her mom that she did the sex'n with Nick.

Nick shows up and he's not really nervous, he just wants to be himself. Before going inside, Kaitlyn informs Nick that she told everyone about the sex'n.

StepMom Kathy, KathyCat, is so out of element.

SisterCat literally just said, "I hope he's here for the right reasons." She has waited her entire life to go on television and say that to a camera. KIDS, IF YOU DREAM BIG ENOUGH AND WORK HARD ENOUGH...

Mom goes on and on about how much she hated him on Andi's season.

"Kaitlyn has told me there's a huge attraction to you. What is that?" -- Mom
Oh.

Nick starts to cry. I would cry too, if someone was all, "HOW COULD ANYONE LIKE YOU? HOW IS THAT POSSIBLE?"

Nick kind of asks for KaityCat's hand in marriage. Mom says, "sure."

She's on the Nick train now. ALL ABOARD. Next stop: Shitsville.

"I love every part of your daughter." -- Nick, to Dad
Better words, Nick. Dad knows you did the sex'n.

"I'd be happy if the ring was put on her finger and Nick was the one who put it there." -- Dad
That is the most literal way to describe your daughter's engagement.

It's Shawn's turn in the gauntlet of traditional Canadian familial settings.

I feel like when Shawn is talking to the camera, he's yelling. I know he's not actually yelling, but it feels like he could be.

StepDad is stepping up his game this round.

Shawn brought SisterCat a gift for her kids and she's already switched teams.

StepMom isn't even on the screen this time around.

"How are you going to handle that feeling of jealousy in the outside world?" -- Mom
Outside world?

Shawn is only a rageful, jealous person because HE IS SO IN LOVE WITH HER, MOM. Once this is EXCLUSIVE and KaityCat is ALL HIS, there won't be  SINGLE PROBLEM. Because she will BE HIS and ONLY HIS.

Mom isn't concerned that Shawn just told her there wouldn't be anymore problems because SHE WOULD BE ALL HIS. She just thinks it is wonderful.

Shawn sits down with Dad. Dad has nodded once and said "sure" twice. One cracked smile and another head nod. He's so Team Shawn.

"I'd be so proud to have her as my gUrl." -- Shawn
I hope my dad would punch a man if that was a part of his speech to marry me.

Shawn asks Mom and Dad for their blessings. Mom, of course, has a million things to say. Dad formed his statement as rhetorical questions.

Nick wants to have a big barbecue with both of their families.

"I feel all those good feelings." -- Kaitlyn
Is something a person who has no real feelings would say.

The boat has docked and KaityCat is now on NICK'S COUCH AT HIS AIR BNB.
KIDS, IF YOU WORK HARD ENOUGH.

These two lovebirds are just recapping their love story.

"I'm just happy you wanted this to be more than just text." -- Kaitlyn
Cat emoji with heart eyes.

If I ever have to say that to a man, I will not.

Nick pulls the whole, "Hey...I got you something, it's in my room..." card.
Kaitlyn totally falls for it.

It's the shittiest picture frame you have ever seen.

How did Nick's shirt get unbuttoned. Surely she didn't do that?

That picture frame is something you give your grandmother. MAYBE. My grandmother wouldn't be into that.

NICK, ARE YOU NOT INTO PUNCTUATION?
And you don't just get to pick random words to capitalize. There's like, a pattern and rules to it. 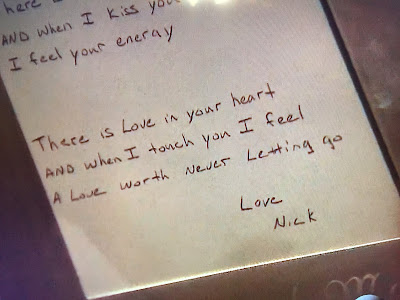 That frame, y'all.
This chick is like, what 30? She can't be that into that frame.
I don't think she'd even put that on her wedding registry at the local store her mom made her register at so all her Sunday school friends can buy them a gift.


KaityCat can see Nick as her husband.

SHAWN'S TURN FOR A DATE!

Shawn is dressed like he's going to the gym. Kaitlyn is not.

Shawn wants to toast to their last date. AMEN. DRINK IT UP.

Kaitlyn apologizes for something and she starts petting Shawn's leg hair. Definitely one of the weirder things I've seen this week.

IT IS TIME FOR THE FINAL DATE.

Shawn realizes the day has been a little awkward. Maybe it's awkward that Kaitlyn is chugging whiskey and you are drinking a Miller High Life, bro.

KaityCat's mind and heart are in SO MANY DIFFERENT PLACES.

This is all very confusing to her. It's not easy.

Kaitlyn is all, "this has been hard on us," and then launches into the whole... "you know you have to watch me do the sex'n with Nick on the TV, right?"

Shawn has a gift for Kaitlyn, too.

"Shawn put together a memory jar...a couple of notes he had wrote me." -- Kaitlyn
You see see, he had wrote me these notes and he had put them in a jar.

Kaitlyn is convinced that no couple has as many memories as they do together.
NO ONE. NOT EVEN COUPLES WHO HAVE BEEN TOGETHER A WHOLE YEAR.

Neil Lane comes by to schlep jewelry at both these guys and Nick is all, "I've done this before!" Neil is like, "eh?" Neil is very saddened by Nick's story. I am sad that he doesn't know how to button shirts.

NICK IS THE FIRST TO ARRIVE.

WE ALL KNOW WHAT THAT MEANS.

Nick finds his block and just needs a moment. KaityCat totally just wants this to be over. How can he not see this on her face? Nick. Come on, man. Look at her. She's about to throw up into that beautiful pool.

Kaitlyn doesn't stop him until he pulls the damn ring box out.

Her heart is just with somebody else.

GET OUT OF THERE, NICK.

Nick gets in that limo and examines the ring. At least he's not out all that cash. Just his dignity. Which, he can't buy. So. Lose-lose.

Nick tries to take a drink of water, but he has to throw that Irish shit ring off first.

Nick's family is in the audience crying. What a way to go out.

He has been working on this speech. Again, Kaitlyn looks like she's going to puke. 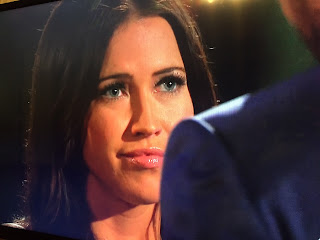 Basically, Shawn just said he wants to feel like he's going to throw up for the rest of his life.

FINALLY. KaityCat gets to REPLY.

"You light me up!" -- KaityCat
Sounds like Mick Jagger.

Kaitlyn is all like, "you never have to be jealous again. I am yours."
Not the best way to describe the situation. But, IDK.

After hearing that SHE IS HIS FOREVER, SHAWN IS READY.

"I AM NOT GOING TO LIVE MY LIFE WITHOUT YOU." -- Shawn

Shawn basically just proposed by saying he was going to NEVER LET HER GO, EVER.

That was actually a really shitty proposal.
Bored.

Life is back to being better because we are free from the tyranny of oppressively shitty TV.