So, if a chick on this show "wins," she has to move to Iowa. And before she can even "win," she has to just go to Iowa?

This is the worst 6-week vacation ever.

Chris just told us that he has "so much respect" for each woman AND that he's made a connection with "every single one of them." Those two statements don't seem like they go together?

That one chick with blonde hair gets some time with Chris and they decide she shouldn't go to Iowa. That bitch is the smartest gUrl on this show.

Chris has a broken heart. He's so heart broken he dropped the F-bomb and it got bleeped out. : (

"These are some of the most incredible women I've ever met." -- Chris
Some?

ChrissyPoo comes in to the ladies know that there will STILL be a rose ceremony tonight and one of the ladies will NOT be going to Iowa. So, one lucky lady will get to leave South Dakota and go back to a place that isn't Iowa.

Chris tells ChrissyPoo that he has "strong feelings" for the six remaining women. He wants EVERYONE to come to a place that "defines him" and he calls it "God's country." Those gUrls reacted in a way that leads me to believe they know nothing about Iowa?

We arrive in Des Moines and Carly said, "there's trees."

One gUrl said she feels so "honored" to be in Iowa.

Jade gets the one-on-one date and it's her second one-on-one date. The other Gs are like, "I'm happy for you, but I'm very jealous." The look on the other gUrls faces' do not lead me to believe that they were happy or even jealous. It's more like, they are going to burn someone's house down.

Jade is going to Chris' farm.

Chris is hanging out in a really expensive outfit talking to his cows. Or cows. I don't know if they are his cows or not.

"Telephone pole!" -- Jade
If you're getting excited about that...

After naming all of the things she saw on the drive to the farm, Jade FINALLY arrives.

Chris hopes that someone would love him enough to move to Iowa.

Chris takes Jade on a tour of his house and then points at a lot of things. It looks like those were his cows, because he knows their names.

Chris takes Jade on a motorcycle ride to "downtown."

Jade is learning that they're aren't a lot of jobs available in Arlington. There also isn't a bar. Or any restaurants. Or a grocery store.

Jade is just standing on this street corner looking around and learning about the economy. She also wants to die. Probably.

Chris and Jade stood on the street corner for about 6 hours-- until the sun went down. They get back on the motorcycle and head to the local high school football game. Chris' passion growing up was high school football. HE IS SO DIFFERENT THAN MOST HIGH SCHOOL BOYS.

During the game, Jade gets to meet mom and dad! His mom is chill as hell wearing that hat on TV.

(The other gUrls are sitting around in the hotel room wearing hoodies and tobogans.)

Then, Chris makes Jade go inside of his high school and listen to how cool Chris was in high school. WORST. DATE. EVER. I'd rather talk to the cows than listening to a 33-year-old man talk about his high school football days.

Chris really wanted to show Jade his old English classroom and Jade really wants to tell Chris about her small town values and some other stuff. But, she's not ready to share the other stuff just yet.

They made out in the hallway and Chris just couldn't believe he was making out with someone in front of his old English classroom.

What the hell happened in that English class? He doesn't really seem like he's super into Shakespeare or anything?

Jade said the night was one of the most exciting nights of her life.
I really hate that for her.

Chris can't describe how good it feels to know that Jade could conceivably move to Iowa before breaking up with him.

It's time for Whitney and Chris to go to an art gallery in Des Moines!

Chris thinks Des Moines' art gallery is the Louvre of Iowa. Which, isn't a thing.

After looking at one photo, Chris and Whitney decide to take some photos around Des Moines. Whitney cannot wait to document their love.

(Jade is back at the hotel telling everyone about Arlington. Britt starts crying. Like, hard. She cannot even handle it. Carly wants to road trip to Arlington and invites Britt along. A lot of the gUrls are torn between if they should go or not.)

Whitney cannot to show the photos of them making out to their kids someday.

The other gUrls on the road trip, have calmed down a lot. No one is impressed.

The exit the vehicle for some more in-depth exploring.

The gUrls stopped and asked some locals for a good place to eat. He said, "not Arlington."

Britt is struggling with picturing herself living there. Me, too, Britt. Me too.

Chris and Whitney head to a Des Moines hot spot. Chris says the date was one of the "best days of his life." : (

One of the dudes asked Whitney if she loves him. She didn't really answer.
She did say she doesn't have reservations about moving to Iowa. Lies.

Chris was really impressed with Whitney. He just can't believe that Whitney impressed him like that.

Whitney tells Chris that she doesn't have any parents.

Whitney is looking for a man with great parents, because "I don't have any." : (
She even wants to call his parents mom and dad.

Chris has one of their photos painted onto a mural. And then, he giggled. And he hung his mouth open like he was getting a root canal. 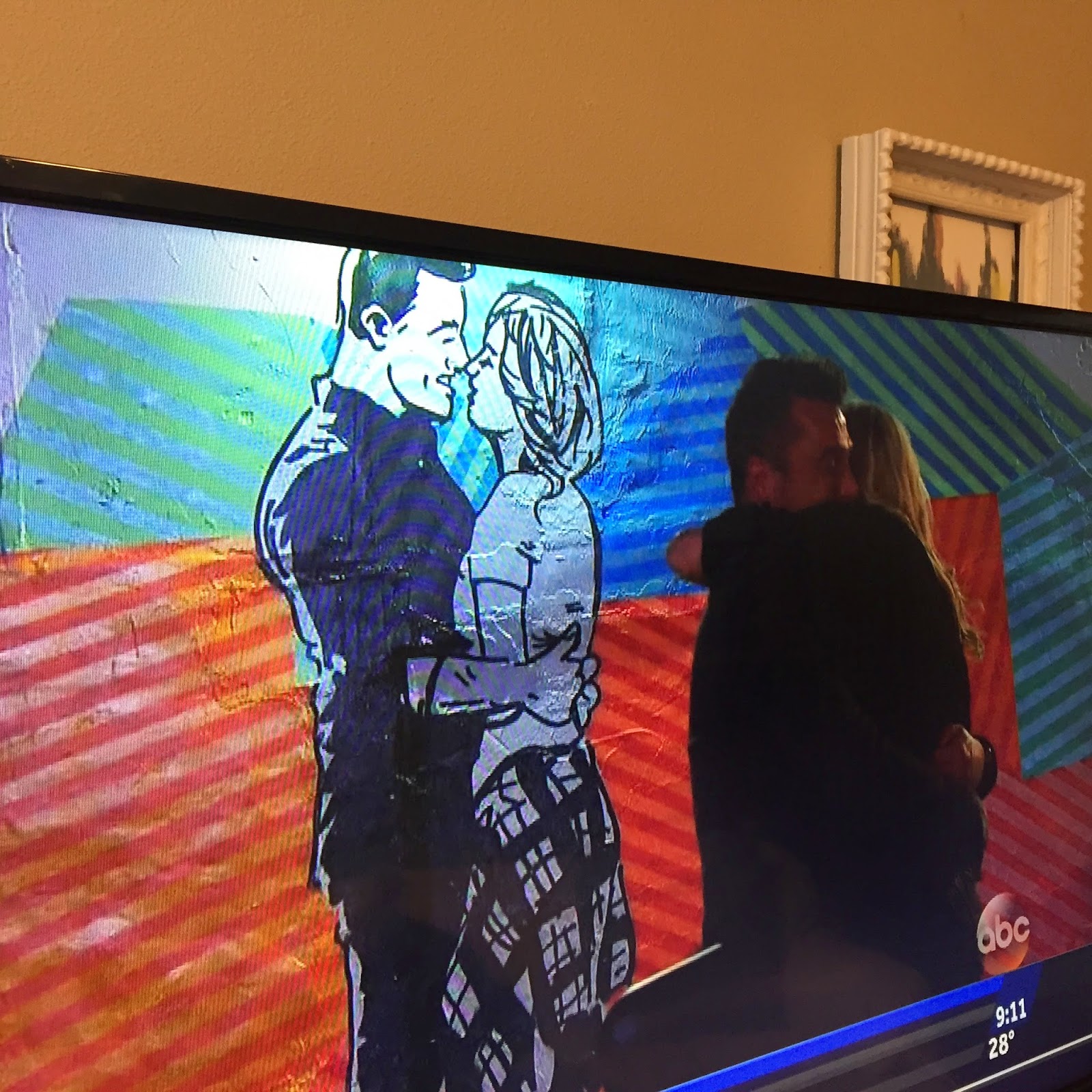 Jade decides it's time to tell Carly her big secret.

Jade was a "nude model" for Playboy. Carly did a great job of being chill.

Jade thinks this could end the relationship.
DUH.

Jade's dad found out about her "nude" modeling from his co-workers. Can you imagine? Holy shit.

The group date is only Britt, Carly and Kaitlyn. There is a rose.

They are "obviously" going to do some ice skating today.

My grandpa and like, every other man on my dad's side of the family were farmers.
They do not giggle.

Carly thinks Britt is really fake and she's "really mad about it."
She knows Britt doesn't want to live there.

On the other hand, Britt is still outside telling Chris how much she loved Arlington. He is eating it up and sucking her face off.

Then, Carly sits down with Chris and spills the beans. Cat's out of the bag, Britt! She tells the entire story and how Britt went from being truthful to  A LIAR.

Chris pulls Britt aside. And Britt tells Chris what her hometown would be like.

Chris is sold.
HOOK. LINE. SINKER. Emphasis on the sinker.

The other gUrls are convinced that Chris isn't an idiot, but : (

Kaitlyn gets some time with Chris and she "wants to get there."

Kaitlyn is frustrated and she doesn't want to be.

Kaitlyn says she feels behind. Chris says, "You were killin' it last week."
WHAT?

Kaitlyn gets the rose.

Britt is stewing. And the music is implying MURDER.

When Kaitlyn comes back with the rose Britt just sits on the couch nodding her head and staring at Chris.

Chris tries to explain his choice and Britt tells him to "stop," while cracking her knuckles and sighing. Carly acts like an adult.

Britt goes on... in front of everyone, but to Chris.

"I'm really, really hurt right now... I feel like the day that we had... going to see your city... going... how I envisioned myself...your wife... my family...literally, asking, begging you for validation.... I mean, that's fine if you want to do that... it's really hard right now. I don't want my husband to see me as a third or fourth down the line... I want my husband to want me back." -- Britt
OH, PLEASE REMEMBER SHE IS DOING THIS IN FRONT OF EVERYONE ELSE.

Finally, Chris shuts it down. Or tries. Then, he says he's looking forward to tomorrow and leaves.

I honestly think Britt is being truthful. I don't think she is mad at Kaitlyn or hates her or anything like that. I do think she's kind of BATSHIT CRAZY.

Carly is sitting in the corner chugging white wine.

Back at the hotel, Carly spills the beans to the other gUrls.

Britt is crying. She doesn't know if this is how she should feel.

I THINK EVERYONE SHOULD GO HOME, BECAUSE THE PRIZE IS IOWA.

You're blog is the only reason I watch this damn show. Thanks for supplying me with endless giggles. Haha.

This blog is the only reason I watch this show. Your bomb.com