ChrissyPoo rolls in wearing one big navy blob, so I am assuming the wardrobe department has the day off.

He is there to tell the ladiez that CHRIS' THREE SISTERS WILL BE DECIDING WHO GOES ON THE ONE-ON-ONE DATE. Can you believe that?!

Like, a bunch of Gs get a date card that says something about being natural or something. What's more natural than going camping and driving two really old cars?

"Nothing is sexier than a guy driving." -- Ashley I.
Such low standards.

Chris takes the chicks to a lake.

"I'm excited to see how these gUrls react to nature." -- Chris
Oh. A secluded, private lake with coolers and toys, that NO ONE had to carry themselves?

One gUrl took her top off and then, another gUrl took her bottoms off. But, they put them back on very quickly. Doesn't matter how quick-- their dads still saw it all happen.

The SistaGs show up and that one cruise ship director is acting like the damn Easter bunny hopped up to the damn door.

They just sit around and interview everybody three-on-one.

"If you're not nervous, you're missing out on something important in life." -- CruiseShipG

The Sistas just keep asking everyone if they're comfortable living in Iowa. Everyone is all, "IOWA IS SO SEXY AND COOL."

We learn that Jade used to "model, for like a web site, for clothing." But, now she is developing organic makeup. Then the Sistas said, "Oh, many talents!"

If someone, said to me, to my face, "I'm developing an organic makeup line," I would probably set her car on fire.

Kelsey is trying to take over Tim Allen's PureMichigan commercials and she is NOT impressed with this lake, she wants to go to a lake in Michigan, NOT this hell hole. She is so angry over this "lake" she's spent the entire day fake smiling and now wants to stab a fork in her own eye.

"This is questionable." -- Kelsey
PREACH.

About this time, Chris announces that they are all spending the night at the "lake." THEY ARE GOING CAMPING.

Two of the gUrls put up one of the tents by themselves and Chris looked at them and said, "what just happened?" HE IS THE TYPE OF GUY WHO ASKS TO CUT A gUrl's STEAK WHILE THEY ARE AT APPLEBEE'S.

IT'S A TENT, NOT THE PENTAGON, CHRIS.

The CruiseShipG sits down with the Sistas.

"I haven't had a guy be very nice to me....my grandpa loved my grandma." -- CruiseShipG
Shut that down, gUrl. Don't lead with that. Like, no guy ever has been nice to you?

We learn that Jade gets the one-on-one date from the Sistas. They were VERY impressed with her entrepreneurial spirit.

Chris wants to take his kids camping, so he is really enjoying making those kabobs for the Gs.

Kaitlyn gets some time with Chris and she just wants to know what makes Chris-- Chris.

LIKE NO OTHER MAN IN THE WORLD-- HE IS TOUCHY-FEELY.
Kaitlyn got her own house, got her own car, two jobs, works hard, she a bad broad.
She doesn't want a man to give her gifts, SHE WANTS WORDS.

We've found our villain! It's that gUrl who is obsessed with Michigan! Apparently, she's the first gUrl to ever fake laugh on a date. (According to the Gs.)

"What are you?" -- Ashley S., to Chris
Totally fair question. 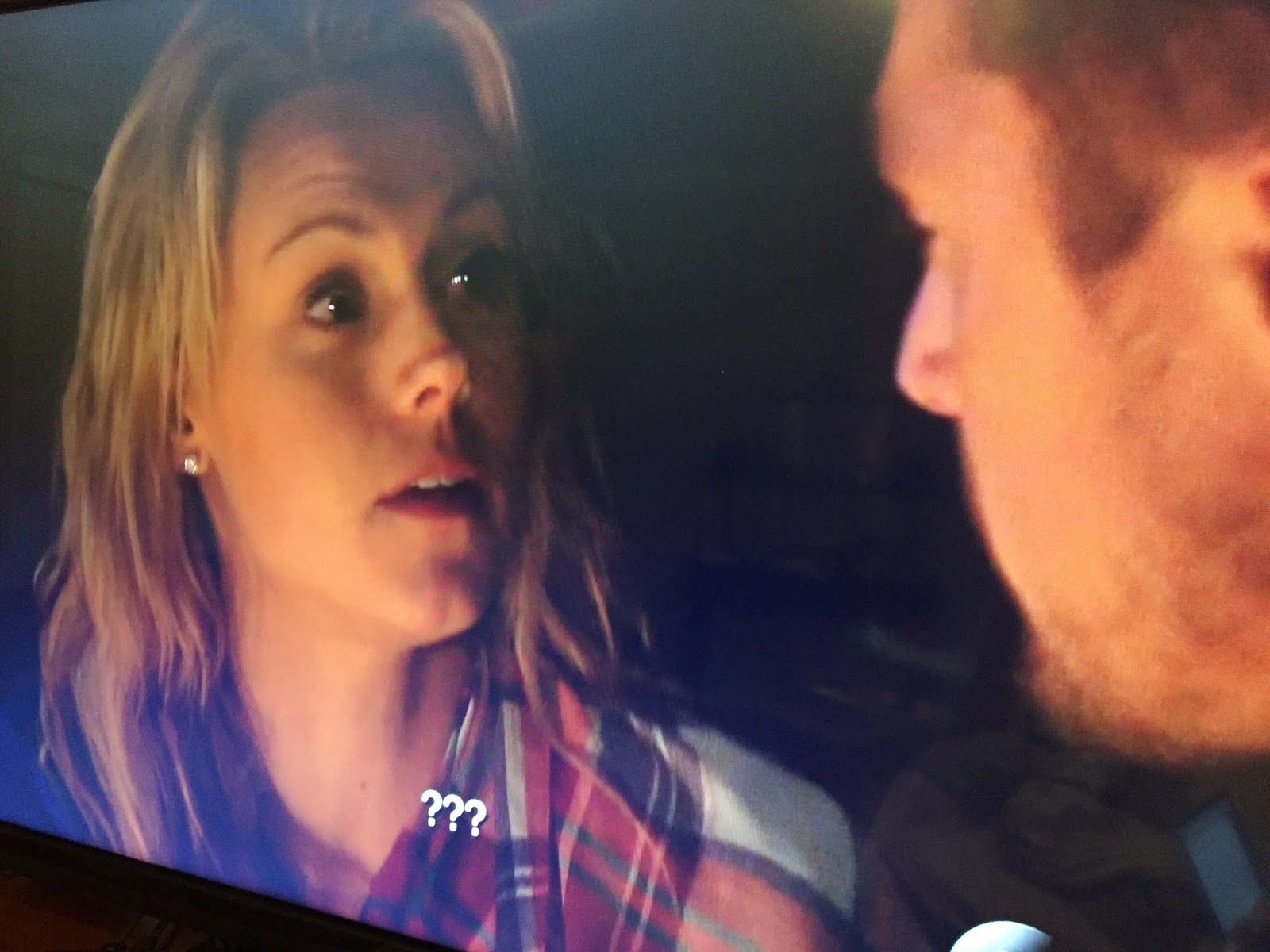 This chick is on-point.

Ashley I. tells Chris that she doesn't like guys, but she has a "frickin' crush" on him. That was an invitation for him to kiss her. Obvi.

Ashley I. is obsessed with the fact that she is a virgin.

"I don't think Chris could guess that I'm a virgin." -- Ashley I.
Like, how do you phrase that?
Chris...you'll never guess what I've never done! Guess!

She heads to his tent.
"I am freakin' innocent." --Ashley I.
"The moment I met you, I got the vibe that you were smart, well-rounded and a girl." --Chris

She keeps referring to her virginity as a "vibe."
She feels like she really spilled the beans.

She doesn't want him to think she's a hook-up gUrl, so she went to his tent really late at night and made out with him and talked about her "vibe."

It's time for one-on-one date with Cinderella. Or Jade. Whatever.

A few homeless people come into the mansion screaming, "Jade! Jade! Where's Jade?!"
They are there to transform her into a "modern-day Cinderella."

Ashley I. is FAH-REAKIN' out because apparently, she is the ONLY gUrl in the entire world ever who's wanted to feel like Cinderella.

I'm like-- y'all, Cinderella's mom died and her dad married a real bitch. Christmas probably sucks.

Ashley I. cannot believe how frustrated she is.

OHHHHHHHH.
ABC.
DISNEY.
YOU TRICKED ME.

This segment sponsored by a movie, produced by Disney.

Is that really how JUELIA spells her name?
Has to be a typo.

Chris is waiting on his date.

"I hope at the end of all of this, my fairy-tale comes true." -- Chris
A MAN JUST SAID THIS.

They sit down to dinner and just talk about being engaged before. Chris likes that Jade told him things he needed to know.

Back at the house: Ashley I. is eating corn (off the cob) while wearing a "princess dress" and drinking white wine on a couch alone. AND IF YOU THINK THIS IS THE FIRST TIME SHE HAS EVER DONE SOMETHING LIKE THAT, YOU ARE INSANE!!!!!!!!!!!!!!!!!!!!!!!!

Chris gives Jade a rose because he is "really impressed" with her knowledge of Omaha.
Jade really "peeled back the layers" tonight. She doesn't tell just anyone about Omaha.

Chris said Jade has a "Cinderella-feel" to her.
In other words, "she feels like she used to be poor and sad and kind of smells like bleach, but she looks really pretty."

ABC BE TRIP'N PLAYING THAT NEW MOVIE UP THERE.

I HAVE NO NICE THINGS.

Jade has a curfew and they said "fairy-tale" 469 times.

Kudos to her running down those stairs in that dress and heels though!

Everyone puts on a wedding dress and gets in a limo.

Jillian is mad. She likes to hike and run.
She's not feeling the best that she can feel today.

Now, the Gs are on a private plane.
Chris greets them on the runway in a tuxedo.

"We're in San Francisco!" -- Chris
I'm actually surprised he didn't show them that on a map.

He whisks them away to a muddy obstacle course. You know, one of those tough mudder race things.

They must race, against each other, in their wedding dresses. The winner gets the evening date with Chris.

JILLIAN IS SO IN HER ELEMENT.
There's being outdoorsy and athletic and there's running through a muddy obstacle course and calling it your "element."

Carly compares Jillian's muscles to Chris' muscles. And other things.

Chris, being an ass, decided to "hang back" and "help" the gUrls finish the race.
CHRIS IS THE TYPE OF GUY WHO HAS NEVER DONE HIS OWN LAUNDRY.

Jillian wins the date and gets to go to a fancy hotel suite for dinner!

Chris asks Jillian, "where do you see yourself in 5 years?"
Jillian starts talking and doesn't really stop.
She doesn't have a 5-year plan.

Chris is not happy with this.

She basically starts talking about working out and her un-athletic dad and her mom's "training" and Chris is not impressed.

Jillian broke her dad's heart because something about Cleveland and then, dirty jokes.

"Would you rather have sex with a homeless gUrl who's crazy OR abstain from sex for 5 years?" -- Jillian, to Chris
She did not get the rose.

Gosh, I don't know why. That seems like a totally normal question to ask a guy.

Chris says his goals aren't aligned with Jillian's, so he's going with his gut-reaction and it's not there for him.

"I hope I find love, not just love-- love with the person I am supposed to share my life with." --Jillian
Good clarification.

Chris goes over his bio again-- he's 33 years old and he's been single for most of his life. Minus that 7-year stretch with the gUrl he asked to marry him. Otherwise-- UNATTACHED.

One of the chicks blind folds Chris and feeds him fruit.

Ashley I. is still FAH-REAKING out. She thought she clarified everything, but her "vibe" was all off. So, tonight-- she's telling him.

Chris is VERY confused.
Ashley I. doesn't want him to be freaked out.

"It's not something I'm super serious about." -- Ashley I.
COULD HAVE FOOLED ME.

Of course, Chris is "impressed" by this fact.

At this point, I'm convinced she is just waiting on him to be like, "May I de-flower you now?"
LIKE, WHAT IS HER DEAL.
WHAT IS YOUR DEAL, gUrl?
REIN IT IN.

Everyone in the house is WAY OVER her v-card.

THEN, THAT OTHER CHICK TOLD HER SHE WAS A VIRGIN, TOO.
HEADS ARE SPINNING.
DADS EVERYWHERE ARE CLAPPING.

Ashley I.'s eyes rolled back in her head and I thought she was going to have a seizure.

Britt pulls Chris aside and asks the greatest question ever on this show.

"I want to know why these actions and behaviors were validated." -- Britt, to Chris over his whoring ways

He cannot answer.
His integrity has been questioned AND THAT IS TOUGH.
He is literally speechless. Like, words cannot come out of his mouth in the form of sentences.

Chris appreciates her honesty and is glad to have the conversation, BUT HE GETS HIS ASS UP AND LEAVES REAL QUICK.

"I am a man and I will handle this like a man." -- Chris, over his whoring ways

Chris tells ChrissyPoo that things "changed this week."
ChrissyPoo also put those words in his mouth, so I'm not sure if it's true or not.
Also, I couldn't hear him.

LADIES, CHRIS, IT'S THE FINAL ROSE TONIGHT!!!!!
WHEN YOU'RE READY.

Duh. Britt gets the final rose.

Juelia (seriously-- spelling?) has a daughter and Chris thinks she is special, so he held her hands for way too long.

Ashley S. is going home and the world is weeping.
Y'all, this G has this game on LOCK.
She invented the damn game.