Tonight, we're in Italy. Andi has taken her Southern-ghetto dialect to the land of leather and cheese and we're being promised: lies and love.

There boyz roll in on a boat and take in the sights.

Cody is convinced that he's getting the one-on-one today, because she was saving their date for a really special place. He's wrong. Andi is not taking him on the first date. She's taking Nick. : ( The date starts as soon as everyone is off the boat .

Nick is dressed like a displaced member of New Kids on the Block.

Everyone is upset for Cody, but I don't get it, because it's a competition and a show about love. So, like-- MAYBE SHE DOESN'T LOVE CODY.

The boyz head back to their hotel and Cody and Chris take a seat on the terrace to discuss the situation. I'm like, you're wearing a black wife-beater while on vacation in Italy, you wouldn't even take yourself to Little Ceasar's wearing that!

Nick and Andi go get a piece of pizza and the slice they got looked like something you would get in a school cafeteria.

Then, they went and took pictures with pigeons. The pigeons were on their heads. GROSS.

It sounds like Sting wrote the background music right now, but really, someone took a Sting song and made it really bad and that's how to describe this music.

Nick and Andi get back in the boat and Nick wants to know Andi's opinion.

BACK AT THE HOTEL, THE DATE CARD ARRIVES AND CODY LEARNS THAT HE WILL GET A ONE-ON-ONE. HE THINKS THIS MEANS THAT HE STILL HAS A CHANCE. NO ONE HAS EVER HAS LESS OF A CHANCE. : (

Andi sees a bridge and tells Nick if they kiss while under the bridge he'll win the show and the Cubs will win the World Series in the next three seasons!!!!!!!!!!!!!!!!!

Suddenly, it's night and Andi is on a boat wearing a mask. But, surprise! It's her! She was trying to fool him, I guess. But, I don't know if he fell for it or not.

The two head to dinner and Andi says they're going to a masquerade ball, but they're just eating dinner alone in some old building with cool ceilings. IDK. IDK.

Andi needs some questions answered because of all that ~~**dRaMa**~~ last week!

Nick says he's the victim in all of this and that he has no idea how he became the bad guy.

"I feel wildly fortunate to have the connection we have." -- Nick
#blessed

I think even Andi is confused about the premise of this show at this point. Why is she mad that Nick is acting like her boyfriend?

After dinner, they head to their "masquerade ball." But, it's just the two of them dancing outside to an accordion, cello and violin.

Kind of felt like we were watching the deleted scenes of a Taylor Swift video.

Andi thinks everyone on the group date has been honest with her, so naturally she's going to give each of them a lie detector test?

"It's great, you gotta get to know somebody..." -- Josh
Right. This what you should do within the first 6 weeks of dating someone.

Andi goes first. They asked questions like: IS ITALY YOUR FAVORITE COUNTRY IN THE WORLD?

The questions asked: are you ready for marriage, do you prefer blondes over brunettes, have you slept with over 20 women, do you wash your hands after you go to the bathroom, are you here for RIGHT reasons.

After Dylan answers "no" the bathroom questions, he leaves. Apparently, he's sick. He also said he's slept with more than 20 women. So. That' pretty neat!

Chris is asked if he's the secret admirer and he says YES!!!!!!!!! He's very upset, because he wanted to do it in a more romantic setting, now it's just creepy! (Chris, SPOILER. It was all creepy.)

IMAGINE THE MOST BORING DATELINE EPISODE EVER.
That is what we're watching.

The results are in and Josh thinks if someone isn't there for the right reasons, ANDI WILL FIND OUT.

Andi gets the results.
She told two lies.

Instead of reading the results, Andi rips them up. SHE TRUSTS EVERYONE!!!!!!!!!
Cody is MAD that Nick didn't have to take a lie detector test.
I'm mad that this is a thing.

Andi is glad she ripped up the results, but she still wants everyone to be open and honest.

The middle school basketball coach asks Andi to administer her own lie detector test.
It got awkward quickly. But, then, he asked her if she wanted to make out. She said, NO and he said, "you're lying!"

Listen. NO means NO.

Andi sits down with Marcus and he admits that he thought about leaving at one point. He didn't leave though! He didn't leave because he thinks Andi is worth it! Then, KISSING.

I think he must be hiding his fashion sense. That scarf.

Josh starts getting testy. They have both very Southern-ghetto accents, so it kind of feels like we're watching an episode of "A Different World."

Chris sweeps Andi away and he admits to being the secret admirer. Andi knew it! She just knew it.

"I'm glad it was Chris." -- Andi
I think she would've said that about anyone.

"It feels awesome to put myself out there." -- Chris
Wait. What.

Andi gets ready to hand out the rose. She says "it's weird," about 40 times.

"I mean, how many times can you say you took a lie detector test in Italy?" -- Andi, to the group
IDK, ASK AMANDA KNOX.

JJ, the pants guy, is starting to get a little upset about all the bromance going on. He doesn't understand while everyone is congratulating everyone on getting roses and one-on-one dates. No one else agrees with him.

It's time for Cody's one-on-one date and I'd rather watch a birthing documentary than 10 minutes of him. : (

It's not that he's a bad dude, it's that everything he says sounds like a Facebook status.

He's way too excited about this. I mean, the producers made her do this.

Andi takes Cody to Club Di Guiletta. They will be reading letters from across the world sent to Juliet.

I'm so confused by this. Is this Italy's version of Dear Abby?
Who would write a letter to a Shakespeare character from 1597?
I am so confused.

IS THIS REAL LIFE?
ARE THESE REAL LETTERS?

Andi and Cody read a few letters and respond to a few.
Cody's response was surprisingly thoughtful and well-written.

I'll say it again, he doesn't seem terrible or anything, I just don't want to be at a dinner table with him. Or at like, a pool party. He seems like a guy who would always be trying to push you in or something.

It's time for the nighttime portion of the date. Cody has decided to dress like a Miami Vice character. His v-neck t-shirt is deeper than any ocean you could swim in. 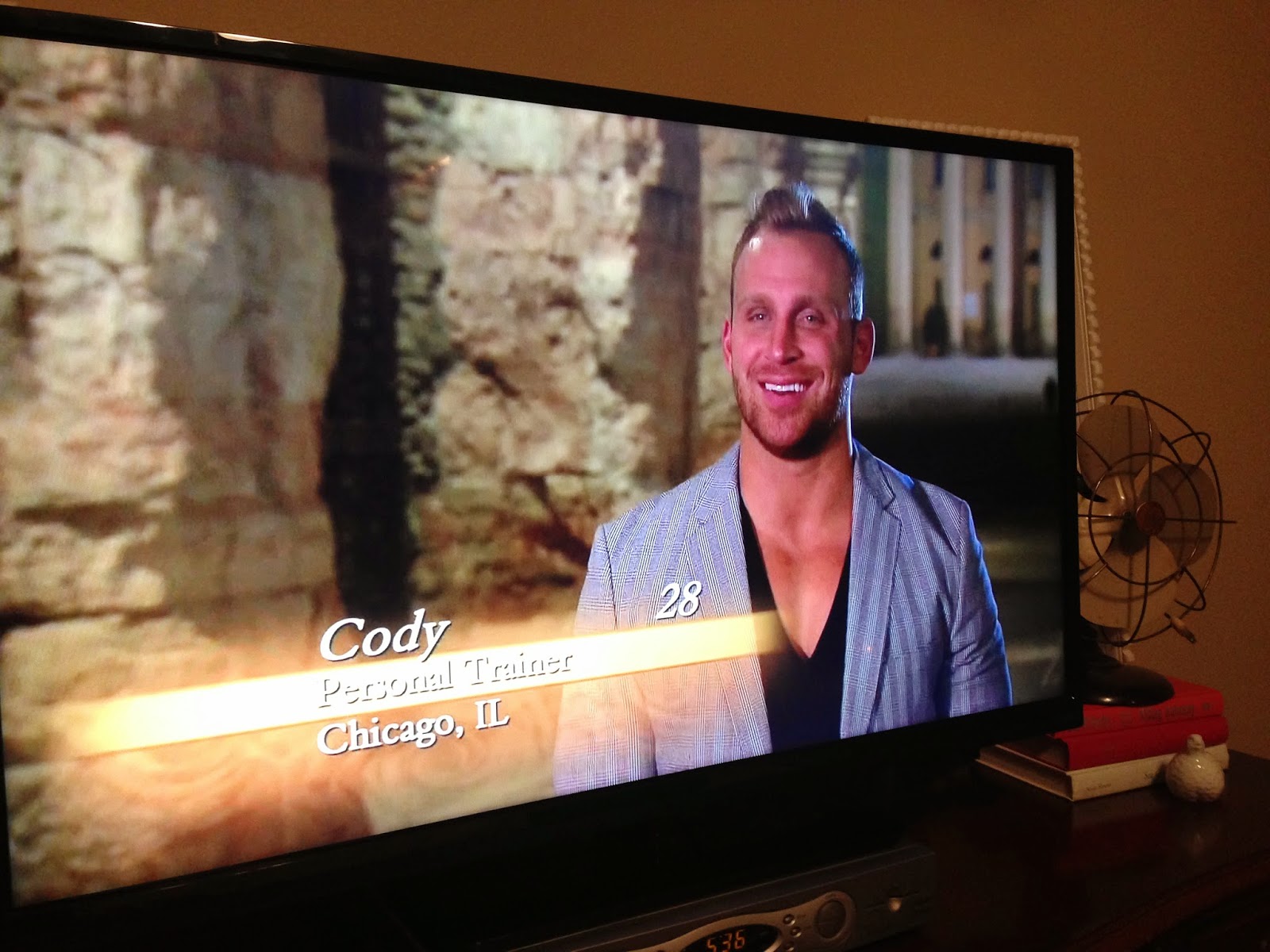 Cody thinks if he gets a rose that it means she wants to be with him.
He starts the dinner off with a letter.

The letter was sweet, but he called Romeo and Juliet's love story THE GREATEST OF ALL-TIME.

First off, they both committed suicide at like, 15. Can you imagine the Today Show coverage of this story today?

Second, has he never heard of John and Abigail Adams? That is history's greatest love story!!!!

So, after the letter reading, he starts in on a soliloquy. (OH, man. I nailed that one.)

"I've never experienced anything like this...it's kind of like I've known you for a long time... the first date is big time, I feel good. Andi, I'm willing to make a bold move for you. You make me feel on a whole different level... I just want to like, grab you, hug you, kiss you, roll around with you... it's a weird feeling. I like you, I want to know more about you. I want to meet your family, I want you to come to Chicago, I want you to be a part of my life. I want to take you home to my mom and dad! I'm telling you right now, you'll fall in love with me the more you stay around me. The longer you keep me around, YOU'RE IN TROUBLE." -- Cody
Finally. Finally. She cut him off.

Andi says she took him on this one-on-one date just to figure it out. She can't give him the rose. She respects him too much.

Whenever y'all are ready we can go back to how he said he wants to "roll around" with her.

Maybe Cody isn't so bad. He cried in the limo, but seemed to take it well. But, also-- see above. He kind of went on a rampage of words. I think he would've kept going, he would've gotten to kids' names, middle names, how they'll divide up holidays, plan family nights and it's likely that he already bought an entire family's worth of matching sweat suits.

"We had eight. Cody left last night, one will leave tonight, then we will be down to six." -- Josh, doing math

Andi is ready to "figure some stuff out."
She's always figuring shit out.

Nick is the first one to get time with Andi and everyone calls him a jackass.

Dylan steps in on Nick's time and the other bros are still mad.
He says he's in love?

Every single guy gets time with Andi and every guy kisses her.

Josh wants to clear up some shit with Andi.
Listening to these two talk is like watching a "Step Up" movie.

ChrissyPoo gets some time with Andi. And like, where have you been, bro? These guys are about to go bat shit crazy.

Dylan gets the first rose, which...UH-OH.
Brian gets the second rose. Another head scratcher.

PantsBoy is heading back to the pants making palace. Or whereever he lives. IDK.

JJ cried. But, I wasn't super paying attention to his limo ride, so IDK.

Looks like some real shit is going to go down in Brussells. I doubt it though.