A few weekends ago I attended my 10-year high school reunion. It was one of those events that I was looking forward to and could've done without all at the same time.

I had some conversations with people that I haven't even seen in 10 years and one guy that I don't really remember talking to in high school offered to buy me several tequila shots. I declined.

At one point in the evening a guy walked up to me and said, "Hey, Lauren! You still hoopin'?" as he acted like he was shooting a basketball.

Also, did this guy really think I was still playing? Where? The WNBA? He really wants that life for me? Oh, the humanity. 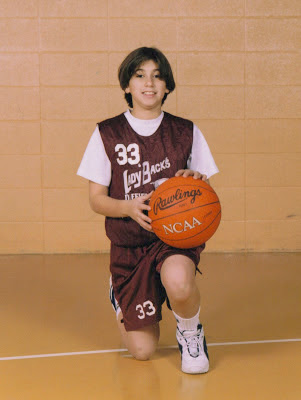 But, thank the good Lord some dreams do die and some things do change.
What if I still had this haircut?

Do you think someone at my reunion this weekend is going to ask if I'm still playing softball?

Hey my name is Kelsey and I happened upon your blog a few months back ( I think someone mentioned it on a blog I was reading about... Wait for... The Bachelorette- I'm as ashamed as you are that I watch that. )

I have stopped by a few times since then and your posts always- ALWAYS- make me laugh. And a good Christian lady that swears? Always a treat. :)

Just thought I'd let you know I enjoy your writing: and I've never commented on someone's blog that I don't know (which you're most likely aware of since you've read the entire Internet) so pardon me if this creeped you out. It's creeping me out a little so I'm just gonna stop. :)